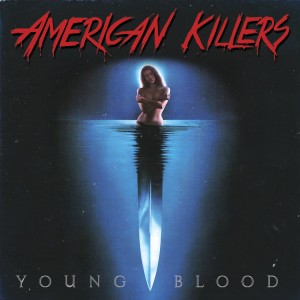 Formerly known as Lite Brite until the threat of legal action necessitated a name change, Sacramento’s American Killers are anything but delicate. Set to bring back various old school rock styles on their debut EP, this three piece band are loud, brash and subtle as bricks. What they aren’t is very good. These five songs show off a lot of bravado and volume, but are ultimately the work of four musicians who understand nothing about range or emotion.

Their resultant rawk is an unexpected hybrid of 70s bombast and trashy 80s sleaze, which sounds okay to begin with, but it doesn’t take very long before the rot sets in. The best part of this release comes with the intro to the opening number ‘There Will Be Blood’ as bassist Joe Finocchio cranks out an impressively fat tone, ably abetted by drummer Matt Underwood, bringing an almost equally impressive bass drum stomp. The huge guitar chords crank the tension, but as the band inevitably explodes into something faster, pretty soon, the show’s over. Lurching face first into a huge and trashy riff, American Killers quickly find a sound that’s somewhere between a Sunset Strip metal band from 1988 and New York Dolls. The unsubtle thrashing about might just be passable, but then Eddie Underwood starts to sing. The effect of hearing him wrenching his throat in a most tuneless manner suggests either the work of a comedy heavy metal singer, or perhaps the sound of a fourth-rate band as featured in the documentary film The Decline of Western Civilisation, Part II – though as some rock fans will undoubtedly tell you, the gap between the two is frighteningly narrow. Across this low grade thrasher, gang vocals belt out the title, whilst Eddie – with absolutely no restraint – squeals and shouts as if his life depended on it. If only he’d stop.

Another enormous set of chords creates a big intro for ‘Starlight Nation’ and also feels like one of the loudest guitar sounds on record. The drums have a reasonable amount of oomph throughout – they are easily the best thing about this track, even with overuse of ride cymbal – and the riffs are solid; there’s a pleasing use of rhythmic stops, but soon enough this track becomes little more than another clangorous noise, taken from bad to worst with the help of a man who makes Dream Theater’s James LaBrie sound as well rounded as Chris Cornell in the vocal stakes. Horrible stuff, indeed – somehow, it’s worse than the opener, so American Killers have really outdone themselves. A marked improvement, ‘Big City’ – chosen to promote the EP – begins with a classic riff. It’s a shame it doesn’t appear to be one of their own: anyone with any reasonable knowledge when it comes to seventies rock will spot this almost instantly as being a slight variation on ‘Stranglehold’ by Ted Nugent (and by “slight variation”, read potential law suit). The drums then kick in and instantly they’re a dead ringer for a bar band’s attempts at recreating John Bonham’s powerful work on Zep’s ‘When The Levee Breaks’. With two major ingredients both so obviously pilfered, it’s down to a spirited performance and/or a superb hook to save the day. That never comes. The vocal drawls in a manner that doesn’t always seem a million miles away from Robert Plant telling us “levee’s gonna break”, only reinterpreted by a half-cut pub singer, before they drag this almost one note dirge out for almost four minutes. There are more gang vocals, more screeching and general rawk, but absolutely nothing which impresses.

The arrival of ‘Napalm’ signifies a change in mood. Yes, the vocal melodies are practically non-existent and American Killers don’t opt for anything complex musically, but the levels of deep fuzz and energy throughout this number at last give a little indication of a band who’ve found a sound that really works for them. Instead of the huge trashy aesthetic, here, they recreate something which sounds like the unlikely pairing of rock ‘n’ roll wreckers (the) Supersuckers and (the) Melvins…if they were produced by Josh Homme. It’s actually quite exciting, especially in the way the simplistic riffs buzz past at great speed. But, as with most things conveying such an energetic stance, it’s quickly tiring and by the mid point, it’s time to hit the stop button and move on. Very much of a great idea not seen to its best conclusion. It’s also worth mentioning that drenched in fuzz and distortion in this way, even Eddie seems a better musical proposition. ‘Maximum Overdrive’, meanwhile, brings this rather trying EP to a close with an ugly, slow-ish grinding affair that’s nearly impossible to get through. The less than tuneful riffs provide Eddie with an ugly backdrop which he then uses to deliver a vocal that’s uglier still, almost as if Faster Pussycat’s Taime Down and Darby Crash (of Germs infamy) had a child and he was recorded mid-tantrum, throwing himself around on the studio floor whilst holding a microphone… Not recommended listening; after this, miraculously, the EP’s first two tracks don’t seem quite as bad. Make no mistake, though, they’re still pretty awful.

These five songs are frustrating. The riffs are big, but that’s just not enough: American Killers seem fairly clueless when it comes to doing something interesting – or even halfway original – with them. The song writing is utterly throwaway and any glimmers of hope are killed by Eddie’s frankly terrible screeching. ‘Young Blood’ may lead to better things…but it seems doubtful. In the words of Nigel Tufnel: is this a joke?