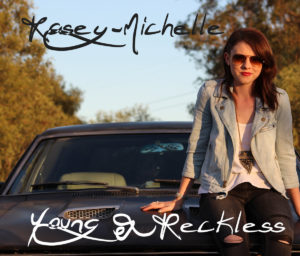 Australia isn’t necessarily the first place you think of when it comes to country music. Aside from Keith Urban, the antipodeans haven’t necessarily had many country music exports since the 60s, but over the years they’ve constantly nurtured their own homegrown scene. Queensland native Kasey Curwen – professionally known as Kasey-Michelle – really grabs a hold of the poppier end of the genre to provide the core sound for her debut EP ‘Young & Reckless’. It isn’t the work of a country purist but, that said, most of this release is still going to be far too country for those who come out in hives at the merest hint of a knee-high boot, and run for the desert plains screaming at the threat of a newer country music and it’s shiny pop fusions. Those who like a bit of a country influence, on the other hand, are likely to find at least two unpolished diamonds within this EP’s five songs.

Opening track ‘Acting Crazy’ has a little of everything you’d want from a feel good country pop tune. There’s the jangle of a crisp acoustic guitar at the heart, though this is purely to set out a solid rhythm; the key musical feature throughout this track comes from a slightly reverbed electric, adding a melodic counterpoint, which lends a toughness where a more traditional steel might’ve fallen flat. The pace is of a natural strut at first, but it shifts into a brisker, more upbeat approach on the chorus where Kasey’s at once slightly curly voice rises to a fuller pop sound, augmented by an equally strong harmony. The country elements are duly amplified and the tune rattles along with best foot forward, musically assured and at all times familiar, while the lead vocal is confident but not quite perfect. In many ways, the slight wobble in her delivery gives the song a more human touch, and when it transpires this has been recorded live, you realise that it’s just got that little bit better. A great start, but the bouncing country-pop of the title track is stronger still. Here, Kasey’s voice is placed against a bouncing bass at first, with the return of ringing guitars to flesh out a great pop-rock melody with country overtones. She’s in much better voice, sounding tough enough to pull off a great performance while retaining a sweetness and youthful edge that really benefits the tune. The whole band are great, from that warm bass and the friendliness of the vocal, right through to the return of the loud, ringing guitars. It mightn’t do anything new in country pop terms, but when it’s so obvious that a performer loves what she’s doing, is there any real need to meddle with the formula?

Taking a sidestep into something grittier, ‘Boots’ pushes the guitars even more to the forefront and with the acoustic elements replaced by all electric for maximum country rock effect, everyone sounds even more at ease. The dirtier leads compliment the main melodies without ever swamping them, while Kasey’s tale of boots outside a bedroom door and an absconded lover take us through a story that moves from adolescence into adulthood. While the wronged lover might be a country music staple, this doesn’t sound either trite or tired, a fact helped by an arrangement that often comes across like a more country infused answer to Meredith Brooks. A couple of listens and this track becomes a highlight. With a hefty strum, ‘Memories’ has a crisp tone and buoyant quality, but other than the introduction of mandolin, doesn’t differ enough to make much of an impression at first. An electric piano and strong guitar lines hold everything together well, but the chorus isn’t as good as those Kasey has demonstrated previously and that goes some way to making this the weak link. There’s no denying that it’s a good performance, but it’s missing that necessary spark. On the more positive side, a very strong case can be made for ‘Loving You’ taking place as the EP’s strongest offering. Amazing as that seems given the potential in most of the other tracks, this slower more soulful tune really shows off Kasey’s song writing appeal. Armed with acoustic guitar, she strums gently at first, the sparse music creating a backdrop for her voice, the percussion free arrangement drawing the ear further towards the vocal while a gentle reverbed electric guitar soars with an almost aching tone. Once the drums appear – adding a cymbal-free beat – this tune takes on a dark mantle, almost like Indigo Girls ‘Kid Fears’ crossed with a deep cut from Chris Isaak. The live performance, as before, goes some way to accenting any imperfections but, in this case especially, that’s all part of the charm.

Although constructed from live performances, this EP doesn’t sell the listener short. The live setting might not be ideal for country rock perfection, but the field recordings really capture the spirit of some well arranged songs, while the mix really pushes the guitars forth for a little extra crunch. These five numbers showcase a performer with a both a natural voice and an ear for a very strong melody. If you’re allergic to country music in any form, this is unlikely to do anything for you, but if you fancy hearing an underground singer-songwriter with a lot of potential and consider yourself to have an open musical mind, you could do far worse than devote twenty minutes to this release.