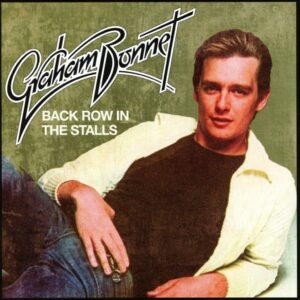 For most people, Graham Bonnet will be best known for his brief stint as Rainbow vocalist between 1979 and 1980. Although he didn’t get to spend long as Ritchie Blackmore’s singer of choice, his talents drove two of the band’s biggest singles – ‘All Night Long’ (a UK #5 hit) and the brilliant radio staple ‘Since You Been Gone’ (UK #6) – and he also performed with Rainbow when they headlined the first Monsters of Rock Festival in August 1980. You could definitely make a case for him being the band’s best-known voice.

Bonnet’s career as a professional singer started over a decade earlier and he achieved a brief spell of fame as one half of pop duo The Marbles, whose ‘Only One Woman’ (an oft-overlooked UK top 5 hit from 1968) showcased a voice that would later become an instantly recognisable talent. Following The Marbles’ early demise, Graham embarked on a solo career, but as careers go, it was rather slow to get off the ground. In 1974, he recorded material for what was to be his first solo album, but the recordings were shelved at the last moment. These were subsequently believed lost until they turned up on a cassette four decades later. Most of these songs were issued digitally as ‘Private-i (The Archives, Vol. 1)’ in 2015, but given the age of the average Bonnet buff, a bunch of digital files would never suffice. Thankfully, the bulk of the material – plus bonus tracks – appeared on CD the following year. With its original title reinstated, Graham’s debut LP finally became a reality.