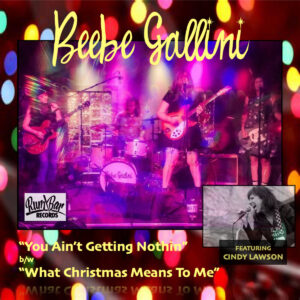 Despite the world being knocked sideways by a global pandemic, the period stretching between the end of 2019 and the end of 2021 didn’t work out so badly for vocalist Miss Georgia Peach. The debut EP from her band Beebe Gallini gained a timely reissue from the Rum Bar Records label, which helped it to reach people who’d missed it in 2018. Likewise, a reissue of her 2007 solo single ‘You Blow My Mind’ was given a new lease of life via its inclusion on a label sampler and a subsequent digital reissue campaign. More importantly, Beebe Gallini’s full length album ‘Pandemos’ (released in May ‘21) made good on the EP’s earlier promise with tunes like ‘Bad Man’ and ‘Danny’ scoring highly on the retro riffs front, and the Bee Gees’ classic ‘To Love Somebody’ being redressed in a world of fuzz. The general online buzz surrounding the album (and the record label’s enthusiasm for it) made it clear that there would be more to come from Peach and her bandmates – and sooner rather than later.