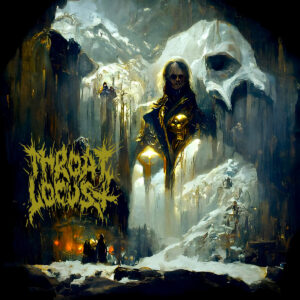 This debut from American death metal band Throat Locust might only present three tracks, but in terms of being an effective CV, ‘Dragged Through Glass’ suggests immediate greatness. Taking elements of a classic death metal sound derived from Entombed, Bolt Thrower and Death, and fusing that with some of the heaviest groove metal touches ever, they have the subtlety of a truck, but in extreme metal terms, they could be the best band to emerge since Eaten By Sharks released their debut in a pre-pandemic 2019. Considering the release claims to be only a demo recording, that says a lot about how strong they already sound.

The opening track ‘Death Lurker’ sets out the band’s stall will a really effective sound. Their direct approach is clear from the off, when guitarists Eric and Alex chug through a couple of sledgehammer riffs, and a couple of brilliant stops suggest a love of early Lamb of God, before drummer Rob increases the speed and tension with the expected pneumatic, heavily rhythmic backdrop. Launching into the verse, there’s a terrific death metal mood at play and vocalist Gil steps forward with a really rough guttural roar. Having established a love for old school death metal, the fastest rhythms are occasionally interspersed with an intense groove metal flourish on the chorus sections, showing a band with a love of an intense melody, but this doesn’t make the sound any more commercial. If anything, the slower grinding increases the tension in a different way, and the push and pull between the two styles sets up a superb mood. Eventually reaching a slower yet more intense breakdown where the groove influences rise to the fore, Gil becomes even more angry, and by finding space for a really spiky lead break, the track pretty much shows off most of the band’s skills within four minutes – all riff, no fuss, no flab.

…And so, the rest of the EP forges ahead in a similar way. ‘Corruption & Greed’ introduces a much dirtier edge during the intro, but via a hefty guitar squeal worthy of Jeff Hanneman, the first verse settles for old school death rooted anger where a dual vocal mixes the usual growls with an almost industrial harshness. Taking a few bars for a groove metal/hardcore blend that showcases the twin guitars allows the listener a moment to regroup before the extreme death returns, but as before, Throat Locust show a genuine affinity for the sound. This feels less like a song than the opener, if that makes sense, but what it lacks in immediacy, it makes up for with riffs, and a really shrill guitar solo will bring enough of a thrill to please most extreme metal fans. Stretching out a little, ‘Axe Grinder’ opens with a riff that accentuates the twin guitars in a way that suggests a massive love for Slayer, before the band reverts to a classic death metal assault. It doesn’t feel so different from before, but the sheer force coming from both the vocals and drums is impressive, and the way a more melodic riff adds an extra quasi-melody to the chorus ensures that the overall mood feels quite varied. A closer ear will also uncover some great lead guitar flourishes, and despite the recording being presented at the kind of volume that’ll occasionally make it seem as though your speakers have blown, a massively dirty bass – courtesy of Adrian – adds a huge weight to everything. By the time Throat Locust reach a really intense coda where the pneumatic rhythms are in full force and Gil sounds as if he’ll rupture something, there’s no doubting this band’s sense of commitment.

Almost everything about Throat Locust’s sound comes with a very old school edge, and it’s that which gives the material a timeless quality. The occasional death-groove flourishes help to balance out an extreme vocal, but never really make the material any more commercial, and that alone reinforces the kind of intensities that will win over fans of the style with immediate effect. Metal may well go through various fads and fashions, but there’s a reason why solid, classic sounding death metal has continued to thrive on the underground, and with Throat Locust, that intense musical legacy set up by the late 80s and early 90s pioneers remains in safe hands.