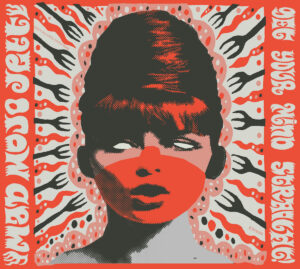 Imagine a band that takes the energy and ferocity of The Cramps and fuses that with the DIY charm off 60s obsessed garage rockers Gallows Birds, adds a little surf rock cool, a pinch of R&B infused pub rock and a smidgeon of The Real Kids’ proto punk, and the chances are, you’d end up with something that sounds a bit like Mad Mojo Jett. That might sound a little messy in theory, but scratch below its fairly raucous surface, and you’ll discover a band with a timeless appeal. A pandemic collaboration between Joe Holland (Low Rats), Eric Levy (Jet Kick) and Monet Wong & Madalyn Rowell from The Toxenes, this is a quartet that’s big on energy and even bigger on garage rock thrills, creating a sound that’s retro yet timeless. Their musical moods value rawness, but the songs latch onto some major hooks along the way.

At the band’s coolest, ‘Missing Stairs’ takes hard edged surf rock to a garage rock extreme, where a little of The Sonics’ pioneering sound collides with Surfaris, taking a heavily twanged lead guitar and pushing it to the forefront of everything. Behind that reverbed noise, a steady beat whips up a very early 60s groove, whilst a very confident female vocal takes the lead, taking some of the soul edged vibes of label makes Shanda & The Howlers and transposing that into the world of retro teenage gatherings, capturing the very essence of this new band with a great ease. Applying a touch more melody without losing any urgency, ‘Rosegarden’ latches onto a straight up garage rock with an r&b riff adding a stop-start groove on the verse, before exploding into a chugging, riff heavy chorus. A brilliant call and response vocal carries the weight of the musical force with the male/female leads supplying alternate doses of grit and sass, before Mandy adds a massive cry, topping everything off with a genuine confidence. At the moment you think the track has hit peak frenzy, Mad Mojo Jett take everything up another notch by applying huge twangy lead break punctuated with the kind of howls that would make Lux Interior raise an eyebrow. Overall, it supplies three minutes’ of garage based perfection, with the band clearly aware of how terrific it is.

‘Partyville’ takes the guts of something that sounds like ‘Louie Louie’ crossed with a little surf, again allowing the lead guitar to demonstrate some great tones. In lots of ways, the beat heavy groove sounds more sedate that many of these garage based bangers, but as if to compensate for that, everything is overlaid with a looser vocal which, in places – deliberately or not – appears to appropriate Black Francis and his absolutely insane shrieking. Although not the most melodic of vocal approaches, it liberates a little more of the band’s unrestrained side in fine style, and the way that anger collides with a sharp surfer groove, captures the heart of the band in many ways.

Moving into a slightly different retro territory, the lengthier ‘Tori’ fills four minutes with a repetitive, almost motorised riff, which is clearly modelled on some of Wilko Johnson’s best works from Dr. Feelgood’s ‘Down By The Jetty’. As with Wilko himself, the main rhythm shows that a chopping riff played with gusto need never become boring, no matter how mechanical it gets, and the way howling leads and bursts of feedback are placed over the groove creates something sonically brilliant. It’s very different for MMJ, yet at the same time, feels like a natural extension to most of their noisy chops. Despite being, perhaps, a little more sophisticated, it marks a place as one of the release’s real highlights.

Opting for something really sharp, ‘Pity Like’ stokes up the higher octave notes, adding more of a punky heart to a garage rock sound. With traces of early Hives and the faster moments of The Strokes thrown into a great musical pot, it’s a track that shows a garage band with a natural gift for riff based melodies, before ‘Chastised On The Spot’ focuses a little more on a warm bass sound, underscoring something that takes elements of The Cramps at their peak. By mixing in a little Elvis style rock ‘n’ roll, there’s a timeless heart, whilst still showing more of the manic heart that pumps most of the material when Eric unleashes an uncompromising shriek to drive his vocal into the ears of a (hopefully) pumped up audience. ‘Hard To Be Broken’, meanwhile, throws in a bubblegum-esque guitar riff and a few sweet backing vocals to temper another round of early 60s inspired garage rock. With elements of retro pop keeping the noise buoyant, it’s easy to hear the band’s love for the style, and with a barrage of wordless “bah-bah”s offered as the backbone of a very spirited two minutes, Mad Mojo Jett bring a new level of infectiousness to their already catchy sound.

The band aren’t just about gutsy noise-making, and the sedate ‘Angel Boy’ drops in with a 60s ballad where a pre-Beatles landscape is mined for a Roy Orbison-esque tune where a softly strummed guitar and echoing drums lay the foundations for a smooth harmony. With Eric in full flow and Madalyn laying on a high end trill, in a yin/yang fashion, it’s all rather fun, and those keeping a close ear will also pick up on a pleasing bassline on loan from some great 50s sounds, before a multi-layered guitar belies the recording’s more modern origins. Although rawer in recording technique, it’s easy to be reminded of other very retro practitioners like Chris Isaak and The Blue Hawaiians – which, obviously, is never a bad thing. In many ways, this more mature sound suggests there’s a lot more mileage in this collaboration, should they choose to go forward.

In a little over twenty two minutes, these guys serve up a potent garage rock stew on ‘Get Your Mind Straight’. It’s the kind of record that values excitement over finesse, and spikiness over any real flash, but in terms of bringing some retro thrills, it’s the kind of hard and fast musical treat that shows how rock ‘n’ roll in its purer forms can still excite. Regardless of the many musical innovations that have occurred since the mid 60s, Mad Mojo Jett are ready to move and shake you until you’re fit to drop.