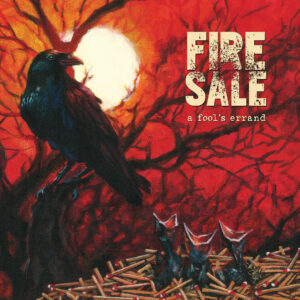 On paper, this two track release from Fire Sale immediately sets a high benchmark in terms of punk. The band features bassist Matt Riddle (ex-No Use For A Name/Face To Face), guitarist Chris Swinney (ex-Ataris) and Ann Beretta’s Pedro Aida on second guitar. Along with drummer Matt Morris, that’s one hell of a line-up, and with the material recorded at the legendary Blasting Room recording studio and packaged in artwork supplied by NOFX/Lagwagon sleeve designer Mark deSalvo, there’s automatically a great expectation even before any music is heard.

Thankfully, in practice, this two track release is everything you’d want from a band such as this. With lead number ‘A Fool’s Errand’ opening with an extended intro where a bass part dances above a mounting groove, and occasional whoahs capture a classic sound, there’s a feeling of something bigger on the horizon. And true enough, when the main melody explodes, with both Swinney and Aida hammering at a great punk riff where bits of classic pop punk jostle against traces of skate energy, it’s absolutely superb. Fans will certainly hear a strong parallel with NUFAN circa ‘Leche Con Carne’ despite a slightly bigger focus on melody with Riddle’s bass approaching something a little more distinctive, and there’s something at the heart of the piece that calls back to some of the stronger Ataris stuff, so very much sounds like a great marriage of the two bands. With time enough for a twin lead guitar break adding a nod to classic rock, a revisitation of the atmosphere building intro and a fairly big chorus, there’s a hell of a lot here wedged into just two minutes and forty seconds.

‘We Dance For Sorrow’, meanwhile, opts for a brilliant pop punk core where, during the verse, the vocals dance merrily above a sparse bass and drums arrangement, before the chorus shifts into a very strong punky riff topped by a jubilant vocal melody. From the second verse on, the guitars beef up the sound and Fire Sale show more of their melodic punk credentials with ease, but if anything’s of great interest here, it’s the little flourishes that set them apart from your work-a-day punkers. Firstly, there’s a great melody linking the verse/chorus where a ringing guitar hints at more of a love of post-punk/new wave sounds, and a brilliant middle eight where Riddle adds some terrific lead bass. Keeping everything tight, some of Morris’s drum parts come with a pleasingly hard edge, and although often settling for stock punky sounds, some of Aida’s louder rhythm work adds a weight to a track with a surprising amount of layers. The filtered vocals immediately show the recording’s origins to be from the 2020s as opposed to being a 1996 vintage, but they effects aren’t offensive. This would certainly sound better without them, but it’s a minor point and certainly down to personal taste.

With NUFAN live shows becoming an increasingly distant memory following the early death of frontman Tony Sly and The Ataris gradually moving into more commercial waters as their career progressed, Fire Sale are very much a welcome treat for both bands – and fans of melodic punk in general. Although just a sample of what Fire Sale could deliver, both songs capture the essence of 90s punk brilliantly, but also convey a feeling of the style moving forward; not being stuck in a rut. In terms of all round enjoyment, this is very satisfying indeed.