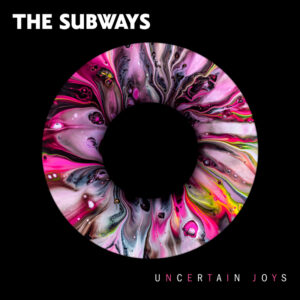 This 2023 release from UK indie rock favourites The Subways marks the end of a long period of silence from the band. It comes eight years after their self titled fourth LP, and marks the first long player for a new line up and a new record label. Drummer Josh Morgan left the band for the second time in 2020, and his replacement Camille Phillips (also of The Ramonas) does an absolutely terrific job throughout the album’s twelve songs, and at the record’s best, the sheer punch the “new” Subways give the material is especially confident.

The first thing that’s obvious about the album, barely before the first track has hit its stride, is that the production values are terrific. The grumbling bass sound that cuts through opener ‘You Kill My Cool’ is immense, and the dirty guitar riff that drives the main melody conveys a similar level of grit. Despite a few new wave-ish keyboards underscoring a fine garage rock groove and a couple of vocal filters fleshing out the final verse, there’s a mood running throughout that shows The Subways’ at their toughest, taking on a Jack White vibe and fusing that with the kind of buoyancy that made Little Thief’s long awaited debut LP so cool. Long time fans of the band will surely take to the great pop-ish vocal interplay too; Billy Lunn’s streetwise tones are brilliantly offset by Charlotte Cooper’s clean and clear power pop melodies, both of which are absolutely integral to the track. Armed with the kind of indie rock chorus hook that most supposed “landfill” bands of the noughties would have killed for, it’s a hell of a way to kick off this collection of songs. With even more oomph, ‘Black Wax’ is another highlight with its dirty punk ‘n’ roll riff that showcases a great distorted sound from Lunn, before dropping into a drum heavy groove where various garage rock tropes are offset by a great indie-ish melody. A filtered vocal is underscored by a wordless female harmony to great effect, and.although the filtered elements mightn’t be to everyone’s tastes, there’s plenty within the music here that holds up brilliantly, especially the main riff which returns triumphantly at the track’s end, sounding even bigger than before. In terms of a tribute to vinyl, this might not convey the sheer chutzpah of Pearl Jam’s uncharacteristically rowdy ‘Spin The Black Circle’, but it has more than enough spirit of it’s own.

The title track changes the mood and brings in hefty programmed beats and bracing new wave keys, occasionally sounding more like The xx than typical Subways, but there’s an uplifting mood cutting through the main melody that makes it really fly. Bringing in a few guitars and real drums for a crashy indie influenced chorus, there’ll be just enough rock returning to please fans, but the band cling onto an adventurous spirit, where higher pitched vocals careen into a busy rhythm, and the manner in which Cooper underscores the upbeat sounds with a really light melody reinforces the retro new wave mood. It takes a few plays to really click, but when it does, it shows a knack for indie pop that’s quite infectious. ‘Fight’, meanwhile, is on hand to remind everyone that The Subways haven’t lost all of their indie-punk teeth on a track that shares a faint influence from Art Brut, where sharp lyrics attacking tabloid newspapers and the government are spat with intent. With a great vocal set against distorted guitar lines that pull influence from bands like Dirty Pretty Things and other ragged UK indie rock, but played with a little extra distortion on the chorus, this becomes an instant highlight on an album full of great tracks.

With lyrics that tackle the state of the online “media” at the time of recording, ‘Influencer Killed The Rock Star’ warns of the dangers of “disappearing down a YouTube hole” and of how these supposedly knowledgeable online celebs are only after your money. From some artists, such a heavy handed lyric could come across as easy, empty bleating, but here, there’s a feeling of someone genuinely rattled by such obvious grifting, and the chosen musical arrangement is suitably spiky. Lunn launches into a garage rock riff with an old rock ‘n’ roll edge with immediate effect – sort of like a more reverbed Hives circa their more commercial ‘Lex Hives’ period – and with Camille dropping in an especially punchy rhythm, the track has a genuinely hard edge. More so than on a lot of these songs, this takes some obvious rock moods and shakes them in a way that they feel fresh. Maybe its the contemporary setting for the lyric and Billy’s soapbox anger really adding to the music’s power; maybe the extra interest comes from Charlotte’s occasional counter harmonies contrasted by a severe fuzz bass… But whatever it is, The Subways haven’t sounded this vital in a while. By contrast, ‘Swanky Al’ rarely seems to rise above a bog standard indie status; sort of like a Kaiser Chiefs with distortion pedals. It’s soon clear that its main problem stems from a poor sequencing choice rather than the arrangement and performance – coming straight after ‘Influencer…’ really does it no favours. When heard in isolation, though, it sounds a fair bit better. The chiming guitar lines have a great clarity, and the tom-heavy drum part is one of the album’s strongest. There’s something in the very British narrative, too, that makes it seem like a distant cousin to Abdoujaparov’s very natural observations, which can only be a good thing. If nothing else, it’s the kind of track where the guitar chords bring out the real heart in the current Subways sound, and that’s enough to make it sound good when played back at high volume.

‘Futures’ clings on to a similar noughties indie vibe but manages to sound a little different by infusing a rhythm that occasionally feels like it wants to slip into something of a more baggy persuasion. Lunn’s filtered vocals are often rudimentary during the track’s first half, but that’s all that’s required here; the bigger interest comes from another well placed harmony from Charlotte, some fine synths used brilliantly to usher in a far smoother section, and a tight and upfront drum part, with Camille very obviously not wanting to appear too much like the “new person” on her debut recording with the band. Finally, by tailing off with some full throttle indie-punk riffs and a round of shouting, The Subways end up sounding like a supercharged S*M*A*S*H (another of Welwyn Garden City’s finest exports), and even though this might seem like three half formed songs mashed together, it results in a seven minute epic that not only works, but actually becomes the ultimate showcase for all of The Subways’ combined talents.

With a pulsing bass drum, tinkling 80s synths and a broad pop vocal melody, ‘Love Waiting On You’ is a hugely radio friendly indie number where the band’s more optimistic traits take the reins, and despite its hugely commercial sound, there’s nothing about it that feels like a “sell out”. Rather more, it’s a brilliant three minute showcase for Lunn, who’s clearly able to helm great pop without leaning too heavily on the guitar. There are times when it could pass as a different band from that who presented ‘Fight’ and ‘Black Wax’ elsewhere within this 44 minute disc, but variety is one of the real strengths of this album as a whole. ‘Uncertain Joys’ is a lot of things, but predictable it isn’t.

Taking another musical detour, the tribal drums that drive ‘The Devil and Me’ finds The Subways exploring old school rockabilly territory. Camille’s playing is especially on point throughout; never too heavy on the cymbals during the verses, and always loud enough to push Billy’s twanging guitar even harder. Billy, meanwhile, sounds truly at ease, as if he’s channelling something from the Long Tall Texans’ catalogue, before everyone crashes headlong into a broad indie-punk chorus where great harmonies offset a really noisy drum part. Again, this demonstrates how, even on this slightly more commercial album, The Subways can still pack a massive punch.

‘Uncertain Joys’ may well be the first work from a “new” version of The Subways, and their first for their fourth record label, but there’s not a hint of doubt that this riff-heavy trio sound better than ever. Between ‘The Devil And Me’, ‘You Kill My Cool’, ‘Fight’ and ‘Futures’, there’s a strong enough core to the track selection to make this a great addition to their catalogue, but with no obvious filler to be found within the dozen cuts, this album presents a very welcome return that’s likely to be well received by the fans.