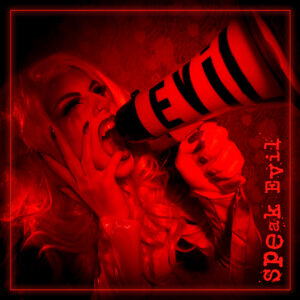 Like most bands, British metal act Bang Bang Firecracker found themselves having to drastically rethink all of their plans at the beginning of 2020. The global pandemic meant they couldn’t promote their debut album ‘Welcome To The Slaughterhouse’ effectively, but guitarist/vocalist Kieron Berry’s writing went into overdrive, and the band soon found themselves in possession of a superior follow up. Instead of releasing a full album, the decision was made to split the record into three EP releases as a way of keeping everything fresh, and it’s a move that’s really worked in the material’s favour. Although the first EP, ‘See Evil’ was potentially hampered by a truly terrible song (‘G.F.Y.’), it was clear that the band’s gift for a riff had come on in leaps and bounds since the debut LP, and the core of the material showed the kind of band capable of taking the traditional elements of metal and thrash into new and interesting places. Its follow up, ‘Hear Evil’ more than made good on that promise by adding some really muscular basslines to a great sound, and also showing Berry’s song writing in a more mature light.

‘Speak Evil’, the final part of the EP trilogy, is a little more of a mixed bag, but as before, when BBF hit their stride, their power is immense and their command of a riff shows a British metal band with a huge confidence. With two of its three heavy workouts capturing some timeless sounding metal grooves, there’ll be more than enough for extant fans to get their ears around, and maybe enough for first time listeners to have their interest piqued.

The EP’s best track, ‘Straight To The Bloodshed’ taps into a classic thrash sound, which will immediately appeal to the BBF fan base. The main riff comes with a dirty edge, very much conjuring the same moods as classic Testament, and couples that brilliantly with a couple of chugging hardcore breakdowns which call to mind the best bits of ‘Stomp 442’ era Anthrax. This brings an unshakable musical base, and after adding a very British vocal to the mix, it’s easily recognisable as being the same band that delivered ‘Hear Evil’, and very much shows a power trio in great shape. The moods and tones often outshine the lyrics, but in old school metal terms, tales of how “the hammer comes crashing down” and “the chaos of the killing ground” very much tap into the collective mindset of the band’s 80s heroes without sounding too much like a direct re-tread, and the number’s busier musical flourishes show off some great playing. In this case, there are some particularly smart bottom end grumbles from bassist Marcus Wrench, a surprisingly melodic lead guitar break and overall, a superb sense of tightness that’s locked down by drummer Bob Ansell in a very direct manner. The band don’t necessarily bring anything new to the style here; the greatness throughout the number very much comes from their abilities to summon a classic metal sound, but it’s a musical goal they achieve with a real ease.

A little more marginal, ‘Life After Dark’ opts for something slow and moody. A slightly distorted, ringing riff takes obvious cues from Slayer’s ‘Dead Skin Mask’, but BBF make the ominous sound their own with the addition of a hard sounding drum part and an absolute ripper of a lead guitar solo where Berry shreds his fretboard like a man living in 1988. It’s the kind of number that mightn’t click on first listen – the initial riffs barely change throughout; as such, it feels like a very one paced five minutes – but a forthright lead vocal, a few guitar harmonies and some really smart bass work go a long way to filling space in a way that hints further at the kind of complexities an on-form BBF are more than capable of bringing to their sound. It’s used here as the opening number; it doesn’t work especially well as a mood setter, but on its own merits, it’s an interesting deviation from the expected thrashier tomes. Rounding out the release, ‘We Can’t Hear You’ kicks off with a speed driven riff that’s obviously derived from ‘Master of Puppets’ era Metallica with its mix of thrash and chugging interludes, but the BBF anger gives the tried and tested style a little more bite – and better drumming. Hearing Kieron’s vocal sneer colliding with Bob’s bass drums in a few places adds a definite power, and although a couple of the guitar riffs err on the side of obvious, there’s still a great forcefulness in the actual playing that shows how classic thrash never gets old when tackled in this way. Eventually bowing out with a sharp riff powered by rhythmic stops, it gives the listener more of a feeling of how much oomph the band would have in the live setting, and by keeping the arrangement to a tight three and a half minutes, BBF obviously understand that less can be more (unlike the Metallica works that have likely acted as a musical springboard).

Since this EP opens with ‘Life After Dark’ – one of the band’s arguably lesser tracks – the material on ‘Speak Evil’ actually works best when played alongside the previous parts of the trilogy, as that places the moody ‘Life After Dark” part way through “side two” of a full length album. On the plus side, fans will certainly encounter some top grade riffs here; ‘…Bloodshed’, in particular, presents a band absolutely on fire, and a couple of the gruffer vocals reawaken some of the great anger from previous recordings. Overall, ‘Speak Evil’ is very good; it doesn’t quite have the sheer energy of its predecessor, but there are moments here that are stronger than the first EP, which more than suggests that, going forward, Bang Bang Firecracker will become an even more impressive musical unit.

If you’ve enjoyed this review, or anything else at Real Gone, please support the site by buying us a coffee at the link below. The site is non-profit, but expensive to run, and all small change will help keep us online for the next year. Thank you.