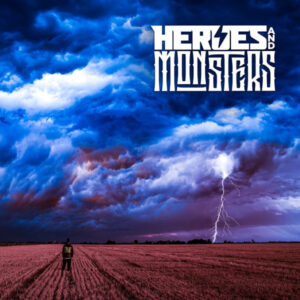 Although formed as a new band in 2022, Heroes And Monsters features three very established musicians. Guitarist Stef Burns will need no introduction for a lot of rock fans, having played with Alice Cooper and Y&T in the 90s. Bassist Todd Kerns mightn’t have reached household name status in the UK, but he’s also been a member of Alice’s touring band, recorded with Slash, and been an integral part of big selling Canadian alternative rock band Age of Electric. With Evanescence/Black Label Society man Will Hunt occupying the drum stool, Heroes And Monsters have a great pedigree, even before taking their music into consideration.

The best bits of their self-titled debut are as strong as that line-up suggests. The band’s hard rock sound very much favours Stef’s guitar work, obviously making up for spending a few years in a sedate mood as a member of Huey Lewis’s News, and Todd’s lead vocals are very much on point throughout. The opening track and lead single ‘Locked & Loaded’ sets the tone with an extended intro where the riff builds gradually, accompanied by a rising vocal “whoah”. As the main groove explodes, the Heroes’ hard and dirty sound is clear for all to hear. Comprising a Zeppelin-esque swagger with The Almighty’s hard rock heaviness, the arrangement has a pleasingly dirty feel, and with Hunt’s drums appearing very loudly within the overall mix, the recording comes with a massive punch. Kerns’s vocal adopts a huge hard rock cry, and although he’s not by any means in the same league as someone like Myles Kennedy, he retains a volume and presence that suits the job in hand, with equal parts melody and grit. The chorus isn’t quite as big as such a number deserves, but it definitely sets up the album with a big attitude, and with Burns dropping in a classic sounding, metal-edged solo along the way, it certainly doesn’t skimp on the hard rock thrills.

Steering further towards the more alternative end of the hard rock spectrum, ‘Raw Power’ has a dirty heart that shares a distinctive tone with the noisier bits of the Age of Electric debut, and as such, Kerns appears vocally at ease. His bass wields a really grungy tone, but that’s balanced out by Burns bringing in a heavy, chugging riff that, when set against a very groove laden drum part brings everything a little closer to some of the heavy hard rock from bands like Tommy’s Rocktrip. As before, this comes with a huge set of boots, but really takes off once Burns steps to the fore, and his first featured solo is a brilliant fretboard melter where a few really impressive tricks drop a couple of Tom Morello-ish tones into an 80s metal squealer. An unexpected second lead break brings even more of a shredfest against a very heavy riff, but with a very 80s gang vocal driving the main hook, again, the marriage of classic and alternative rock elements works brilliantly here.

Keeping up the momentum, ‘Let’s Ride It’ delivers in terms of another chunky riff with Burns dropping into a couple more classic rock tropes to push forth another heavy-ish sound. It’s an interesting number, since the chug of the verse never feels too far removed from something Glenn Hughes might have explored during his heavier ‘Addiction’ days, but the chorus shifts into the realms of massive party rock anthem where a choir of vocals seems more suited to one of Alice Cooper’s 90s rockers. With a couple of nods to something else from Age of Electric, and a fairly melodic lead guitar part that draws from a late 80s AOR sphere, it’s a real melting pot of rock. In terms of presenting the full range of Heroes And Monsters’ big rock sound, it’s definitely one of the album’s highlights, and with Kerns sounding in great form vocally, it very much captures this band’s chunky hard rock with a certain amount of ease. Hunt’s drums appear to have been mixed and mastered particularly unsympathetically, however; the abrasive sound from the opener works less well here, but it still conveys a sense of a band with a genuinely hard edge – one that would sound terrific live.

Those keeping a closer ear at this early stage might spot a couple of backing vocals that owe a small debt to some of Sweet’s more excessive charms, and that’s certainly not by accident. Propping up the original cuts, this album features a thunderous cover of ‘Set Me Free’ which has been given a massive kick up the arse. Armed with a trashy rock/melodic metal hybrid riff, Burns really cuts loose, whilst Hunt smashes the hell out of his kit. The love for the track is clear, and Kerns injects a lot of power into his vocal. It almost sounds as if it were written for the band, and in terms of sheer balls, it runs rings around Saxon’s recording from 1984. Another highlight, ‘Blame’ pushes both Burns and Hunt to the fore on a hardcore inspired riff that carries echoes of Anthrax’s ‘Stomp 442’ period. With that eventually dropping into a sludgy groove on a chorus that has hints of Jerry Cantrell’s solo work and post-Layne Alice In Chains, it offers nothing for the classic rock die-hard, but what it does, it does very effectively. The way it places broad and clean harmony vocals over a humongously filthy riff is especially cool, and in terms of showing off this trio’s heaviest chops, this is a winner, even though the album features a few arguably much better songs.

‘Angels Never Sleep’, meanwhile, occasionally sounds like one of The Cult’s leftovers circa ‘Ceremony’, and as such, its actually really easy to imagine the younger Ian Astbury tackling the vocal melody Kerns has chosen for the verses. Mixing a classic rock sound with a light goth undertone appears to suit the band brilliantly, and as the number progresses, even a slightly heavier approach doesn’t diminish one of the album’s strongest melodies. If anything, Hunt’s crushing drum sound combined with Burns’s abilities with a chugging riff comes close to “peak Monsters” during this track, and with Kerns taking on a much broader melody than before, this is certainly one of the tunes that’ll appeal to a broader audience. In another change of mood, ‘Break Me (I’m Yours)’ tips the hat to the more basic rock of bands like Jackyl via a second division AC/DC riff driving the verse, and the manner in which a big chorus hook revisits the glory days of big haired rock is sure to connect with those who love all things retro. It doesn’t test any of the musicians, of course; this is meat and potatoes stuff that’s very much played in a solid way, but it never feels lazy, and Burns gives everything a lift with another impeccably played solo. Despite the fact that this could be three dozen bands from the late 80s/early 90s, it would be a lie to suggest that the end result isn’t massively enjoyable; the fun Heroes And Monsters are clearly having here comes through in massive waves, and – as great as this album already is – a couple more tunes in this vein would certainly have been very welcome.

Contrasting tracks like ‘Blame’ and ‘Raw Power’, ‘Don’t Tell Me I’m Wrong’ adds a few acoustic elements to the mix and flaunts an enormous harmony, before settling on a hard edged, classic rock/melodic metal groover that sounds like a distant cousin to a couple of old Alter Bridge tunes. Hunt’s drumming is terrific throughout, whether powering a chugging chorus – complete with effective stops – or rattling off an almost militaristic sound beneath another great solo from Burns. If it weren’t clear before, this track demonstrates how much actual power he brings in terms of this power trio, and with regards to vocal prowess, the more spacious arrangement gives Kerns more room to shine. Overall, even though there are bits of this track that could pass as an old Age of Electric tune (specifically in the way the big chorus soars), it’s another arrangement that shows off this still new band at their finest.

It’s fair to say that this is the kind of album that doesn’t reinvent the wheel, but in terms of big rock sounds music played by established musicians, it brings a lot of entertainment. It sounds good from first listen, but the best songs sound even better with every subsequent spin. With its ten numbers running to a very old fashioned, vinyl friendly thirty nine minutes, there’s no room for filler, and certainly no chance of the listener becoming distracted. A couple of tracks might be a bit too grubby for the retro hard rock purists who might’ve been hoping for something a little more in the Slash/Myles Kennedy mould, but in terms of riffs, hooks and general attitude, this is a highly recommended offering from a group of friends whom appear to bring out the very best in each other.

BUY THE CD: Heroes And Monsters