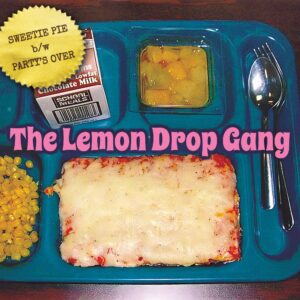 This two track release from garage rockers The Lemon Drop Gang presents the band’s first new music since 2020’s cult sensation ‘I’m Not The One!’, and for those who loved that full length release, these tunes will certainly be hailed as a welcome return. New listeners will, perhaps, have to work slightly harder to reap those listening rewards, but they’re very much there, and should present themselves very definitely somewhere around the fourth play.

‘Sweetie Pie’ is a musical treat that’s every bit as good as anything found on the previous LP. By opening with a massive surf rock drum roll, they make no secret of their love of a pre-psychedelic time, and from the instant the guitar riffs latch onto a great melody, the track treads a fine line between sassy and naive. In front of a crashy drum part, guitarist Johnny O’Halloran leads the charge with a ringing lead guitar that continues in the surf-ish vein, but settling into the verse, there’s much more of a classic 60s pop feel. Bassist Danny Walker adds a reasonable amount of muscle throughout, but he’s quickly swamped by an incredibly loud vocal. Almost in contrast with the retro, ragged but obviously melodic music, Steph O’Halloran wails like she’s performing at CBGB’s; she never worries about going off-key and her drastically unfettered approach manages to be louder than most of the instrumentation. Assuming you’ve had a steady diet of garage punk over the years, this really shouldn’t be an issue; in fact, there’s a genuine glee to be had from hearing her truly cutting loose, and by the time she reaches peak frenzy with a massive squeal, it’s easy to believe that, for all of their roughness, this is a band capable of anything. There’s a lot to be said for not being fussy, and armed with a great riff and superb melodic chorus that’s truly put through the ringer, this track comes close to being one of the band’s very best – even with the very obvious flaws.

Even crashier, ‘The Party’s Over’ takes a really rough swipe at a different sixties sound where elements of surf rock take a more dominant role. This really benefits the rhythm section throughout, and bassist Danny really proves himself in terms of solid playing. Joined by drummer Tommy Larkins – making his debut on a Lemon Drop Gang recording – there’s a genuine musical camaraderie that works, especially once Tommy latches onto a groove that harks back to a classic Merseybeat feel. The British Invasion qualities aren’t lost on Johnny either, and he fills the bulk of the track with strong ringing tones. The musical highlights very much come from a drum heavy middle eight that revisits the sounds of 1964 with a great confidence, and a fine descending riff sending off a confident chorus. The more melodic backdrop isn’t the best vehicle for Steph, unfortunately. Faced with a melody that requires many more lengthy notes, the atonal qualities in her voice dominate, and it can be hard going. However, when reaching the track’s climax that features backing vocals that are so off key that even The Replacements would baulk, there’s a chance that this was all by design, and the vocal represents some kind of difficult morning after. The party’s over, indeed. The best advice here is to come for the great bass work; if anything else actually works for you, then it’s very much a bonus.

Always pulling between the rough ‘n’ ready sounds of the CBGB’s crowd and the sweet pop from the Phil Spector stable, The Lemon Drop Gang can seem a little neurotic, but much like The Dogmatics – a band with whom they are closely related – when they hit the mark, their love of a great riff and live in the studio production sound works brilliantly for them. Sure, a couple of the vocals are a little looser than perhaps was needed, but if you’re able to take the Lemon Drops at face value, the good time feel of the tracks will speak for itself. As always with single releases, it supplies just enough excitement to whet the appetite for new material, but not quite enough to scratch any kind of long-term itch, but settling for what’s been given, there’s certainly enough raggedy garage rock and loose power pop battling it out within these songs to entertain extant fans, even with a couple too many rough edges to contend with.