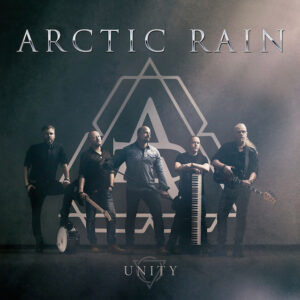 On their debut album (2020’s ‘The One’), Arctic Rain largely specialised in classic sounding melodic rock, but weren’t afraid to temper a big chorus with a slightly harder edge on occasion. That record presented a selection of very 80s sounding songs in tandem with some great guitar work, and as such, provided a huge amount of entertainment for lovers of bands like Alien, Last Autumn’s Dream and Miss Behaviour.

Their second LP, ‘Unity’, is a worthy follow up to a great debut, even though it sometimes takes a very different approach. Despite a heavier sound in places, the big choruses retain the same melodic charm as before, and on at least half of the songs, there are still some very broad melodies shining through. This is a record that fans will still enjoy, but it is also the kind of record that shows the band pushing forward.

‘One World’ opens the album in a very atmospheric manner. To begin, there’s a huge keyboard drone, the sounds of laughing children, and an off-kilter riff that sounds like a beginner playing the main theme from ‘Tubular Bells’. When the big riff is expected to kick in, the band pull the rug even further from under their listeners and unveil a very low key verse where a theatrical vocal is underscored by an equally ominous melody. It’s all quite dark, but also fitting for a lyric that deals with internal turmoil. “I’ve been searching everywhere to find a way out of despair” croons frontman Tobias Jonsson in a suitably huge manner, before questioning why he must live under “such influence”. It’s a little more mid-period Queensryche than Lionville, but Arctic Rain soon pull through with the expected huge melody on a chorus that utilises group vocals in a jubilant way, set against a chunky AOR riff that captures the essence of the genre for the twenty first century. With a couple of busy descending runs leading into a solo where a great guitar sound collides with pomp driven keys and a later verse is driven by a melodic metal chug, this is Arctic Rain at their biggest. It isn’t the most immediate opener, but it’s hard to imagine it fitting comfortably elsewhere.

The title track track follows suit with another big riff and slightly downbeat tone, but an increase of obvious melodic rock melodies makes it feel much more like the Arctic Rain of 2020. This is especially the case once the verse hits its stride with a Survivor-esque mid tempo and the band unleash some massive whoahs for a big pre-chorus. Having already settled for something big, they then rises to the challenge of reaching for something bigger for the main hook, where Tobias wails about everyone living in unity, underscored by a choir of voices. Before this huge sounding melodic rock/melodic metal behemoth repeats, there’s even time for an even harder riff to creep in, and a very familiar Eastern influence rises, and although it’s only fleeting, it’s possible to hear elements of Iron Maiden’s ‘Powerslave’ and Rainbow’s ‘Stargazer’ as the melodic instigator. This isn’t a red herring, either; it returns to power a brief, but brilliant instrumental section where new members Kaspar Dahlqvist (keys) and Richard Tonyson (drums) lead the charge through something that sounds as if it were on loan from the more accessible end of the Dream Theater catalogue. It doesn’t have much in common with Arctic Rain’s past, obviously, but it’s very good for what it is.

Those who came looking for some great AOR/melodic rock more in line with the debut should take an instant liking to ‘Kings of The Radio’, an unashamed tribute to classic rock name checking Ronnie James Dio, as well as giving a nod to Ozzy and Kansas en route. On this melodic metal banger, guitarist Magnus Berglund is in his element, chugging through chords in a similar tempo to old Heavens Edge classics, whilst Tobias tells a tale of youthful dreams and wireless heroes. The lyrics are mostly fun, even though a little clichéd, and the use of backing vocals really brings out the jubilant spirit of the track. It might be pushing an idea a little too far in the direction of pure fromage when he announces that he’s “proof that dreams come true”, but that doesn’t otherwise spoil this classic rock/AOR romp. Grabbing a hold of another chunky riff with AOR undertones, ‘Out of Time’ gives Kaspar room to indulge before everything drops into a riff that sounds like a heavier take on Journey’s ‘Separate Ways’ spliced with the huge pomp of Seventh Key. As is often the case here, an instantly great number comes into its own via a very confident AOR-centric chorus, and even though this is still slightly heavier than Arctic Rain of yesteryear, the balance between musical drive and actual melody is spot on. Fans of the tougher end of the melodic rock scale will surely get a kick out of a few of the harmonies present, and when the arrangement descends into a piano and string led interlude before a gorgeous guitar solo and subtle lead bass take over, it shows how a little more thought has gone into the arrangements this time around.

‘Peace of Mind’ explores a brilliant pomp-ish riff that calls back to the mid 80s and the fascination for guitar synths, and as such, does a great job in presenting the band’s bigger melodic interests. With the bulk of the tune working a chunky guitar riff, some big Euro harmonies and an occasional crashy riff with a strong AOR undertone, it’s not hard to be reminded of Last Autumn’s Dream, and although Tobias’s chosen vocal might be a little too bombastic for the job in hand, there’s little doubt that there’s a really strong chorus-led number here. With the inclusion of a slightly prog metal infused instrumental break where chunkier guitars give way to busy keys, it provides a very strong link with Arctic Rain’s debut and the harder elements of this album’s opening pairing. In time, it’s certainly the kind of track fans will come to love, whilst ‘Time For A Miracle’ opts for a much bigger AOR sound. With soaring guitars and the kind of big vocal that would suit prime Rob Moratti, this finds the band treading a much safer musical path, but between a great riff and one of the album’s best chorus hooks, it proves that (over)familiarity can often result in something very enjoyable.

Another number with a harder edge, ‘Fire In My Eyes’ kicks off with a speed driven, melodic metal riff that would’ve suited Joe Lynn Turner twenty years earlier. Throughout the verses, Bergland absolutely dominates with a great, Scandinavian sounding riff and Tobias steps up to the challenge with a suitably huge vocal. For AOR fans, it delivers very highly in terms of chorus, though, when the lead vocal hits full wail above some great harmonies and bright keyboards. The contrast between the two styles is peak Arctic Rain, but it demonstrates perfectly how their slightly harder interpretation of a classic melodic rock sound often brings out the very best in the musicians involved.

Elsewhere on a rather solid record, you’ll find ‘Laughing In The Rain’, a tune with a very pleasing mid-tempo and harmonic vocal; ‘When We Were Young’, another tip of the hat to Moratti’s best work delivered with a Scandinavian lilt, and the slower ‘The Road Goes On’, which presents another slower groove and a world of soaring lead guitars – all of which helps to stoke up the AOR quotient in a fine manner. Even when the band decides to take the occasional curveball (as with ‘One World’ and ‘Fire In My Eyes’), everything on ‘Unity’ adds up to a second release that’s very confident indeed.

Lovers of harder sounding melodic rock that’s delivered with a full compliment of harmonies and a real intent will love ‘Unity’. Even though its heavier stance in places doesn’t quite have the same all round charm of the debut, as far as melodic rock and (very) melodic metal is concerned, this still manages to push a lot of the right buttons. …And as for those coming to the band anew, anyone willing to approach it with either an open mind or no real expectations is likely to discover a massive, hook driven work that shows a committed band somewhere near the top of their game.