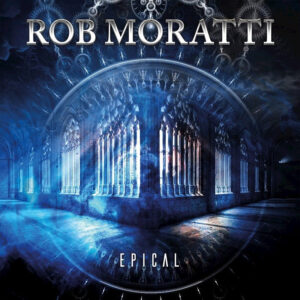 For most AOR fans, Rob Moratti is a man who’ll need no introduction. However, here’s a quick recap for anyone unfamiliar with his career: his early work with his eponymously named band put him on the map via some chunky sounding melodic hard rock, and his brief tenure as frontman with Saga elevated his profile considerably. At other times, he could be found as frontman for AOR band Final Frontier, or sporadically releasing solo material.

He’s not someone who can always be relied upon for a great record, unfortunately. His first solo album ‘Victory’ (Escape Music, 2011) was blighted by so many vocal filters it made Rob sound as if he’d sucked on a balloon full of helium before recording, and his ‘Tribute To Journey’ (Escape Music, 2015) was little more than a phoned in affair that sounded as if he were singing to a cheap karaoke backing track. That was a career low; a massive step back from the best works of Final Frontier, to say the least. Thankfully, his later effort ‘Paragon’ (AOR Heaven, 2020) set everything back on track with some well performed melodic rock that sounded numbers like the ultimate tribute to those big-haired heroes from 1987, and this 2022 release – his first for the Frontiers label – follows suit with a selection of well-crafted AOR songs that are a solid reminder of Rob’s obvious talents.

Naturally, you won’t get any real surprises here. Opener ‘Can I Hold You For A While’ sets the tone with an upbeat riff that’s peppered with bright sounding guitars and bell-like keyboards, very much the poster child for a great melodic rock style. It has all the hallmarks of something you’d expect to hear from Steve Augeri back in the mid 90s, especially in the way the track moves effortlessly from a punchy verse into a massive chorus where the vocal soars. Naturally, Rob’s best vocal abilities are there, front and centre, but throughout this number, Whitesnake guitarist Joel Hoekstra can be heard adding some great work, particularly via a very 80s lead break where his playing straddles a strong melody and a busy style. In short, it’s brilliant – at least in terms of a safe, melodic rock workout.

With the stage clearly set, the rest of the album goes about its business with a similar confidence, aware that its target audience will be happy with Rob recycling lots of superb melodic rock and AOR tropes from the 80s and 90s, whilst approaching some really massive vocal parts with ease. ‘Hold On’ opens with a heavily stabbed keyboard against a deep drum beat, which sounds as if it’ll break into Journey’s ‘Separate Worlds’ at any moment, before veering off into a chunky verse that captures the sounds of the chunkier AOR of the early 90s. Chopping guitars compliment a great vocal from the outset, and when moving into a beefier pre-chorus, the whole band sound great. This suggests enjoyable things ahead, and indeed, a massive key change and an equally big vocal bring some pure 80s love to a great hook where Moratti appears to celebrate AOR’s classic sounds, before the beefy intro makes a timely return to set the stage for another very strong solo. With that cycle repeating a second time, this becomes one of 2022’s most perfect examples of very retro melodic rock – a track almost worth the price of admission alone – whilst ‘Stay The Night’ presents AOR 101 with a solid mix of familiar sounds from both the Journey and Survivor stables. As you might expect, though, Moratti manages to make the tried and tested arrangement really shine, and another massive hook shares a familiar melody that is a solid reminder why such a big – and unashamedly cheesy – style remains much-loved by many.

Mixing a mid tempo with a punchy rhythm, ‘Masquerade’ is superb number where a sparser verse pushes forth a pumping bassline, over which Rob’s high pitched tones cry out with a real clarity. There are fleeting echoes of Steve Perry’s helium tones from Journey’s ‘Escape’ to contend with, but in the main, Moratti’s distinctive style holds firm, and when approaching a chorus that appears to blend a classic US AOR sound with a few Scandinavian lilts – as per Lionville – his grasp of a well worn style is very strong. As with the opening track, Rob’s talents are matched almost beat for beat by Hoekstra who adds another cracking solo, and by the time the massive chorus comes around one last time – complete with the expected key change – this track feels like a genre classic in record time. ‘For The Rest of My Life’ settles for some by-numbers AOR where a pumping bass evokes a very 80s sound and the guitars occasionally rise beyond their mid-tempo chops to add an occasional lift. Musically, as with a few of the other tracks here, the featured solo is the highlight, and in this case, a little fretboard manipulation shows a master class in playing. In lots of ways, though, the music need not be any more exciting; in the main, this is a tune that belongs to Rob, and his high toned Steve Perry-isms are in superb form throughout.

During ‘You Keep Me Waiting’ the tone opts for middling “80s AOR soundtrack filler”, but the song itself is none the worse for settling for a predictable nature. The gentler edge to the tune allows Rob more room to soar on a bass driven verse, and reaching the chorus, an increased guitar brings a reasonable punch without detracting from the melody. The addition of a slightly brighter middle eight and a great solo from Joel help to elevate the track slightly, but it doesn’t ever reach “top tier” as far as this album is concerned. ‘Crash & Burn’, meanwhile, is much better. Armed with a mid tempo groove but a reasonable amount of crunch, Moratti finds himself tackling the kind of melodic rock that would suit Jeff Scott Soto with its stabbed keys, vibrato driven guitar fills and massive harmony vocals. Fans of the style will take to it in a heartbeat, despite sticking firmly to genre conventions, and another combo of big vocal and cool guitar solo will certainly be enough for this to be considered an album highlight. More multi-tracked harmonies drive ‘Strangers’ to greatness, and even though the lyric manages to fit several chorus hooks into one, the band’s sense of urgency sells every cliché in a way that you can believe in. A couple of helium induced moments perhaps aren’t entirely necessary, but this is another number where massive AOR melodies reign, creating something very familiar yet appealing.

As if this album weren’t great enough already, ‘Valerie’ sets another superb AOR mood by opening with a blanket of keys and a soaring guitar, before settling into a mid tempo pop-rocker where Hoekstra’s chopping guitars evoke memories of old Survivor, Boulevard and Seventh Key records. Naturally, Rob opts for another performance with vocal tone that revisits Steve Perry circa 1981, peppered with a little of his own flair. He sounds better on the track’s few quieter moments when he’s not pushing so hard, but armed with a huge melody he makes some very familiar AOR chops really work on a massive chorus which, joined by an impeccable lead break, creates another of the album’s highlights.

Moratti doesn’t set out to put a new slant on a classic style, but what he does, he does brilliantly on the bulk of this recording. Thankfully, those horrible filters from the ‘Victory’ days don’t get as much of a look in, meaning that Rob’s left to tackle the material naturally, and in Joel Hoekstra, he has a musical partner who’s not only sympathetic to his voice, but also capable of handling any different rock styles that might come his way. Overall, although the album title might be a bit of a stretch, ‘Epical’ is a more than solid affair that most melodic rock fans will almost certainly enjoy.