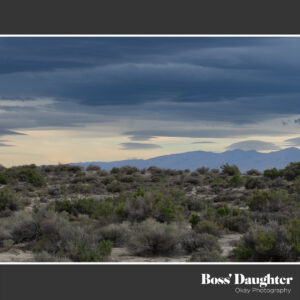 Formed in 2014, US punks Boss’ Daughter [sic] quickly became one of the hardest working bands on the underground scene. During their first eight years together, they’ve played hundreds of shows and shared stages with now legendary bands like Pennywise, Rise Against and The Ataris. Although their studio output seems a little scant by comparison, this two tracker takes the band to the next level, since the vinyl edition technically makes them labelmates with No Fun At All, The Venomous Pinks and skate/pop punk heroes Pulley.

Quite lengthy by punk standards, the four minute workout ‘Okay’ mixes a hefty dose of rock into the punk, opening with a siren-like, repetitive guitar part; its howling sound acts like an ominous musical warning, before dropping into an arty riff that’s full of stops, taking cues from bands like Fugazi. Eventually arriving at something punkier, a rollocking rhythm and a world of muted chords create something that sounds like a marriage of skate punk and the energy driven, classic style of Euro bands like Satanic Surfers and No Fun At All. By comparison, the vocal feels a little thin, but there’s enough cool music here to see everything through, especially with a couple of instrumental interludes along the way. The second of these, where everything slows down for a blend of alt-rock and emo sounds, showcasing some great bass work and a ringing guitar calling back to the much-missed Sense Field, actually creates the number’s high point.

‘Photography’ tightens everything to allow for far more energy, throwing out a hard spat vocal line over a shrill guitar during the intro, advertising the angrier aspects of the band before dropping into a classic pop punk riff worthy of Lagwagon circa 1996. Moving through a hard and fast arrangement, there are some great gang vocals, a harmonic guitar line fleshing out a solid sound, and – somewhat unexpectedly – a rock ‘n’ roll derived guitar part that has the heavy twang of a 70s rock performance, adding something that sounds like a speed addled Bob Seger guitar solo to this musical stew. Few bands would dare to apply such a kitchen sink arrangement to something so short, but Boss’ Daughter bravely decide that it’s a good idea, and in doing so, serve up a winner that shows that melodic punk need not be completely formulaic.

Ignore the terrible, wrongly punctuated band name [a missing s after a possessive apostrophe denotes a plural, which in this case suggests a huge biological impossibility], it’s the music that counts. This twin blast of punk tunes continues the band’s energetic journey, further showing their command of a riff and – in the case of the hard and fast ‘Photography’ – a great speed and a sense of adventure. A recommended listen – grab a download at the earliest opportunity.