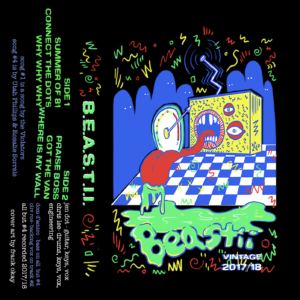 Taking cues from various proto-punk bands, the riotgrrrl stance of the 90s and a classic, fuzzed up garage punk core, beastii’s music is immediately familiar. That’s not to say it’s either tired or safe, however, since the US band attack each riff with an energy and attitude that ensures their material often has a real edginess that punk fans will love.

Arriving at the What’s For Breakfast? label at the end of 2022, their thrashy and punky stance makes them perfect labelmates with Ellen & The Degenerates and Musclegoose, and this release’s highlight ‘Connect The Dots’ really grabs the attention from first listen. Its opening punk riff and shrill vocal might remind some listeners of early material by X; others might hear traces of classic Yeah Yeah Yeah’s – the track has a directness that isn’t so far removed from the best bits of ‘Fever To Tell’ – but beastii bring their own slant to the garage riffs, of course. In this case, the anger is underscored by a brilliant new wave keyboard drone fleshing out the sound and an almost robotic chorus hook accentuates some great sharp edges via a massively repetitive hook. It’s angry, but also conveys a punchy melodicism that pulls in the listener. More importantly, it’s as catchy as hell, and Jen’s forthright vocal immediately sounds like the work of someone who’s been approaching this kind of garage punk for years.

‘Got The Van’ shifts towards a purer punk workout with an overdriven guitar riff powering a great melody. Jen’s relentless guitar buzz often makes the track, serving up riff after riff of old school punk brilliance, but there’s a real appeal in the quasi-melody of her vocal too, as she spits each syllable during a speed driven verse, and taps into the melody of Buzzcocks’ ‘I Don’t Mind’ for another brilliantly repetitive chorus. Perhaps more so than before, the melody here pushes a great rhythm section forward via a loud bass and some very live sounding drums, both of which reinforce the band’s commitment to keeping things DIY. Slowing down, ‘Nothing To Me’ takes a Stooges style riff and puts it through an early Mudhoney filter, when slow and almost garage blues-like grooves unfold beneath an echoing vocal. A great vehicle for showing off the band’s most melodic side, the track comes with a sizeable heart, yet that pumps a proto-punk groove in a way that feels quite menacing due to a mid tempo that takes a hold with immediate effect. A couple of extra layers bring a couple of bell-like keys and a raucous lead guitar break that focuses more on the angular than the melodic but, in the main, the core riff is king, and Jen hammers her guitar with the kind of intent and intensity that’s sure to please fans genre fans.

Keeping with the slower pace, ‘Why Why Why’ works another dirty riff but overlays that with a sharp lead which helps make it feel very different to the rest of the material. The track’s instrumental moments often seem to dominate over the vocal, but that’s not to say Jen’s ever lax, or taking a back seat. The way she uses her voice to create an ominous atmosphere during the verse and then escalates the anger for a really intense chorus shows off a classic style. In a performance cut from the riotgrrrl cloth – and mangled later by the likes of Hands Off Gretel – beastii sound a hundred percent natural, and with no time for needless guitar solos or other indulgences, the track makes an indelible impression somewhere around the third listen. A cover of The Violators’ ‘Summer of ‘81’, meanwhile, casts a spotlight on something a little faster, and although the band choose to play it pretty straight, a much louder drum sound and fiery guitar part helps to make beastii’s recording sound a little more urgent. Jen’s vocal is very respectful to Helen Hill but by no means a direct copy; her approach is a touch more US garage punk than UK second wave, but it’s perfect for the job in hand and she attacks the performance with a real verve, whilst drummer Chris delivers another hefty sounding drum part that goes a long way to giving the recording its genuine edge.

A departure from their usual garage punk, ‘Praise Boss’ shows how beastii are capable of really shaking up their sound when a world of programmed drum loops, synth pop drones, strange calypso derived bleeps and a flat vocal sounds like the work of an entirely different band. Although there isn’t much in common, at least musically, there’s something about this quickly hashed out piece that’s vaguely reminiscent of M.I.A.’s love it or hate it mash-up sound. It’s…horrible, but luckily, this off-kilter lockdown recording is in and out in under a minute and a half, so by the time you find yourself wondering where it’s going, or if the band have somehow lost the plot, it’s gone.

The bulk of this release was released as digital singles between 2018 and 2020, but the opportunity to hear the tracks in one hit makes them sound even better. Six songs is just enough to get the measure of the beastii without anything becoming predictable or stale, and in darting between garage punk, a little hardcore, a touch of rock and even new wave, their lo-fi sound is also varied enough to feel so much richer than your average DIY punk act. Whichever way you approach this, there’s so much for genre fans to get excited about. This release is hard edged and raw, yet at the same time, it conveys a familiarity that makes this young band’s brand of noise strangely user-friendly. Even with ‘Praise Boss’ doing its very best to offset some otherwise great sounds, this is a recommended listen.