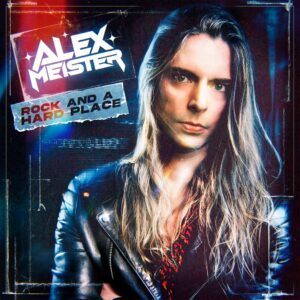 Much like the works of Frontiers Records signing Michael Palace, guitarist Alex Meister is very happy to celebrate a big haired rock and metal past. Throughout ‘Rock And A Hard Place’, his song writing is rooted in a pre-grunge landscape, and his playing is swamped in influences that pull from melodic metal, AOR and trashy hard rock in almost equal measure. Those who like that sort of thing will definitely find something to enjoy on this solo debut, since Meister’s love for the style comes through with ease, and even when the record’s production values aren’t quite as big as the musical ideas, his knack with a chorus is more than evident.

‘Game of Love’ sets the scene by presenting a riff that combines the hard rock charms of Palace with a touch of the glam rock chops of SouthGang. Alex’s tone has a pleasingly dirty edge, but there’s also a huge sound coming through via a great counter melody, and that’s even before any vocals arrive. The meat of the track treads a well worn melodic rock path, but a combination of great guitar work and big harmonies leads to a strong sound. That gives melodic rock fans plenty to latch onto, but things go up a gear when the featured solo appears and Meister absolutely hammers his fretboard as if he’s a combination of Heaven’s Edge’s Reggie Wu and Pole Position’s Lars Boqvist. Add a multi-tracked, glam-ish chorus hook to the mix that, again, latches onto early SouthGang and Palace, and it sets up some solid foundations.

‘Next To Me’ takes a slightly bluesier route and advertises its more melodic streak pretty much immediately when Alex launches into a selection of longer, soaring notes, creating a great vibe. When the hard rock crunch inevitably arrives, the music clings on to the very 80s mood from before, but a more spacious feel allows the guitarist a broader canvas on which to work. As a result, his featured solo is particularly lovely, lending a vaguely glammy feel to a number that owes more to early solo work from Richie Sambora than Poison. Overall, this track’s simpler approach and huge concession to melody shows off the performer at his best, even though the general sound isn’t particularly original.

For the rest of the album, Alex has reworked several tunes from the Pleasure Maker catalogue, and although he hasn’t drastically altered any of his previous band’s songs, each one now sounds a little punchier in a move for the better. ‘Feel It This Time’ mixes a solid AOR/melodic backdrop with a touch of classic Scorpions via the guitar tone. Using the riffs to punctuate a verse where the vocal takes a dominant role, Meister’s guitar work counterbalances his voice, but by the time the number finds its feet, his playing showcases a brilliant crunch and becomes the most important factor. There are some lyrical clichés to contend with (lines about stepping on the gas and being driven crazy are easy hooks straight from 1982), but the overall sound is really punchy, and a late arrival of a twin lead guitar break and a tapping solo – the ultimate in 80s Van Halen love – elevates an enjoyable rocker considerably. Taking more of an AOR stance, ‘It Ain’t ’Bout Love’ places ringing, clean guitar work over a fine, melodic intro, before descending into a world where the sounds of Boulevard and Survivor meet. In a lot of ways, it’s very much melodic rock by numbers, but as before, a few very cheeky guitar flourishes and a pleasing multi-layered vocal driving a big chorus hook create something very enjoyable. Fans of the style will take to the guitar sound immediately, and although Alex’s voice is a little rough in places, there are enough filters and layers applied to a great chorus to detract from any weaknesses. In fairness, he might not be Kent Hilli in the vocal stakes, but he’s a veritable Steve Perry in comparison to the vocals on the Paul Sabu album released just a week earlier…

Making great use of a blanket of keys and stabbed rhythm, ‘Only A Dream’ aims for pure 80s melodic rock 101, and due to another strong hook and great guitar sound, is fairly successful in reawakening some very retro vibes even though another wobbly vocal gives the recording a demo-like feel, and ‘Hard To Say Goodbye’ uses some brilliant twin lead sounds and another great AOR backdrop in tandem with a classic sounding melodic rock melody, instantly recalling early Takara recordings. There’s so much about these tracks that feels nostalgic, from the strident guitar work, harmonic vocals and occasional hints of Red Dawn, it’s hard not to love them, despite the budgetary constraints being a little too obvious. ‘Just Think About You’, meanwhile, returns to the punchier, almost sleazier sound, with a barrage of fist-pumping riffs that come from the Black N’ Blue school of rock – certainly dated circa 2022, but still fun, and definitely fitting Meister’s love of all things retro. For lovers of smart guitar work, it’s an album highlight with Alex sliding effortlessly between a quasi-metallic shred, soaring notes, twin lead sounds and an obvious EVH two hand tapping homage with a sheer professionalism that’s far greater than the material possibly deserves.

A throwback to the mid noughties, ‘Twisted Desire’ is another solid AOR tune where a softer vocal sits comfortably above ringing guitars and a solid gang vocal fills a classic sounding melodic rock chorus. This recording stays very faithful to the old Pleasure Maker recording, but a few extra guitars give it a lift, and it sounds a little better, despite the bass still being somewhat lacking in places, whilst ‘Chains of Love’ reverts to a Takara-ish sound where multi-tracked vocals introduce a relatively punchy hard rocker where big vocals weave in and out of a chunky riff, serving a top retro mood. As with a couple of the other numbers, a few cheesy lyrics are more than evident (“loving you is like a one-way ticket to hell”, “your heart is like a prison cell”), but the music is first rate, with Alex proving equally adept at choppy melodic riffs, sweeping solos, and – eventually – a full blown melodic metal fretboard melting lead. It’s the kind of track that has a little of everything to please a broad spectrum of melodic rock/metal fans, despite the production not being too flashy.

Overall, this is a solid offering from the one time Pleasure Maker man. A few more brand new songs would have been preferred, but a lot of the older material will still be new to a lot of listeners, since the Brazilian band never really made it big outside of their home country. There are a few wobbly choices made regarding this album’s production and mix – the drums don’t always punch through in the expected way, and there are a few moments where the rhythms feel decidedly mechanic – but overall, it all sounds better than his former band’s ‘Twisted Desire’, so it’s easy to see why he’d want to revisit some of those songs. You won’t find anything here that adds anything new to a classic hard rock landscape, but in the main, ‘Rock And A Hard Place’ is a fun listen where massive guitar solos bring shameless 80s thrills, big hooks tap into a long gone MTV era, and Alex’s sense of fun dominates almost everything. Despite the recording sounding reasonably low budget at times, for those hankering after some big choruses and even bigger solos, this is an album that could still hit the spot.