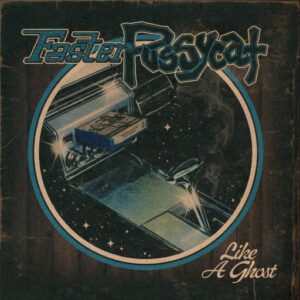 Between 1987 and 1992, Faster Pussycat released a trio of major label albums that gained them a lot of very positive press. Between the trash-glam aesthetic of tracks like ‘Bathroom Wall’ and ‘Smash Alley’, the retro Stones-ish love of ‘House of Pain’ and hard funk of ‘Madam Ruby’s Love Boutique’, the band displayed a broad range of talents and influences, often only linked via Taime Downe’s distinctively scratchy vocal.

Beyond that, the band’s on/off career has often seemed like a shadow of its former self, with Taime and a revolving cast of musicians experimenting with industrial sounds (2001’s ‘Between The Valley of The Ultra Pussy’), really rough, nondescript trashy rock (2006’s ‘The Power & The Glory Hole’) and a bunch of other re-recordings that only ever served to weaken the band’s legacy. Much like the post 90s Bang Tango – a band found within the same family tree due to Taime’s association with bassist Kyle Kyle in The Newlydeads – the latter day Faster Pussycat could be accused of trading off a name and past glories.

By 2022, their only real relevance comes from nostalgia. Nevertheless, this two track release actually exceeds expectations. The self penned ‘Like A Ghost’ wastes no time in hitting hard with a swaggering, Rolling Stones influenced riff that calls back squarely to the ‘Wake Me When It’s Over’ LP, with Downe sneering and squealing against a semi-sloppy bar room riff. The guitar sound manages to be both hard and melodic, capturing a classic sound throughout, and although Taime’s easily recognisable vocal is much less abrasive than before, it has a presence that’s most obviously his. Moving through the verse, this line up shows how easily they can match the classic late 80s band whether serving bluesy guitar solos against a punchy bassline, or generally holding down a solid 70s derived groove. There’s plenty within the music itself that will instantly please fans of those early albums, and even though the chorus is a little flat in comparison, there’s a welcome familiarity in the way Downe takes the simple refrain and hammers it home against a shouty backing vocal. If nothing else, this shows how well Faster Pussycat can still nail a sound that falls somewhere between The Quireboys and Pretty Boy Floyd, and how, when they really try, they can whip up a great hard-edged melody.

A cover of the Johnny Thunders track ‘Pirate Love’ brings a similarly sleazy mood when it drops in with a heavy glam rock beat, a full compliment of siren-like guitars and a chugging guitar, making Faster Pussycat sound like a distant cousin to one of Ryan Roxie’s solo projects. The recording places a focus on some very live sounding drums throughout, but that’s not to take anything away from a couple of steaming guitar solos that accentuate the trashiness of the melody, a fat bassline that gets a moment in the spotlight midway, or Taime clearly relishing the opportunity to chew through a sneering vocal. Speeding up for a rockier interlude, there are more superb 70s derived guitars, this time shared with an 80s metal bent, before the band drops into the chorus one last time for good measure. To be fair, it isn’t necessarily the best Thunders track, but there’s a charm in hearing something that isn’t ‘You Can’t Put Your Arms Around A Memory’ or ‘Chinese Rocks’ wheeled out for the umpteenth time…and FP definitely make a decent fist of this old rocker.

These tracks are the best recordings to bear the Faster Pussycat name in thirty years.‘Like A Ghost’ is a solid enough reminder of the bands command of gritty retro rock, and the nod to a proto-punk hero confirms their trashy stance with a great ease. With so much substandard material lurking within the Faster Pussycat catalogue, it’s a genuine pleasure to hear Taime and the lads firing on all six once more. If you consider yourself a fan or even a casual admirer, then this will provide some unexpectedly welcome musical joy.