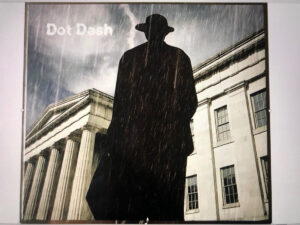 Following a string of fairly jagged albums that pulled together punk, emo and mod influences, Dot Dash’s sound had a drastic overhaul on their 2018 LP ‘Proto Retro’. The rougher edges were smoothed out and in their place came some hugely melodic power pop. The bulk of the record’s tunes came with a 60s jangle as heard through a 90s filter, sometimes as if stumbling upon deep cuts from Teenage Fanclub; sometimes showing a massive love for Buffalo Tom. The musical changes were all for the better, since no matter where you dropped into the record, it was possible to hear something with huge hooks and a really positive feel.

Four years on, 2022’s ‘Madman In The Rain’ picks up where that album left off with another twelve indie rock and power pop cuts that convey a genuinely feel good sound. On more than a few occasions, the material is on a par with its brilliant predecessor. This adds a real confidence to a post-lockdown recording that immediately reminds the listener of good times, and affirms the more mature and more melodic Dot Dash as one of the East Coast’s best underground acts.

An immediate stand out, ‘Space Junk, Satellites’ dives even further into Dot Dash’s pop side, offering something that mixes Teenage Fanclub’s pure jangle pop goodness with a harmony vocal from a 90s indie banger, giving off waves of Gigolo Aunts and Joe Jackson along the way. There’s something very pleasing about the way this tune uses a punchy bass for a core, and when that underscores the sound of something that could be a Farfisa organ, Dot Dash’s commitment to a classic style comes through very clearly. By the time a very understated lead guitar gets time in the spotlight, this becomes one of the album’s highlights. Granted, the chorus melody is a little more subtle than some of the tracks here, but once it sticks, it’ll be there forever.

In and out in two minutes, ‘Tense & Nervous’ harks back to Dot Dash’s beloved post-punk sounds when a punchy rhythm and busy vocal come together with ease, but as with many of this record’s best songs, any grittiness is counterbalanced by a strong melody. In this case, you’ll find a busy power pop keyboard sound, more ringing guitars, and a generally uplifting tone within the vocal that makes everything sound like the ultimate marriage of US power pop circa 1981 and UK indie from a 1992 pre-Britpop landscape. The equally cool ‘Animal Stone’ slows everything down just a little via a tougher guitar part and a honking keyboard that reinforces the band’s love of some very retro sounds. The way this track fuses post-punk/indie roots with a heavy 60s twang and almost spooky garage rock vibes lends the album something very distinctive. The number immediately sets up a strong musical base, but its best moments are supplied when reverbed lead guitars rise up and the keys appear to channel the ghost of Dave Greenfield. At this point, the music becomes all encompassing, almost in a way that the vocal feels a little like an afterthought, but even then, there’s just enough within Terry Banks’s easy delivery to lend an extra charm.

Following a burst of feedback, ‘Everything = Dust’ throws itself into an arrangement that sounds like a call back to some of Dot Dash’s earlier work with a hard guitar and bass sound that isn’t a million miles away from The Jam circa 1980. As with the bulk of this record, though, there’s something a bit deeper than mere homage, and between Danny Ingram’s brilliantly crashy drum part and a lot of energy helping to drive forward a performance with a very natural vocal, you’ll (re)discover a band with a really sharp set of talents. Like ‘Tense & Nervous’, this makes a great show from a verse/chorus/verse/chorus out technique; another two minute banger proving that this band’s real power comes from a lack of musical padding and no real desire for flashiness.

The title cut opens with the kind of riff and melody that fits more closely with a post-grunge aesthetic, but as the verse takes shape, some great harmonies and shimmering guitar adds a great melody, bringing the track back within the expected 60s influenced mood. The highlights here come from a strident bass part from Hunter Bennett, using his four strings to add plenty of muscle beneath an otherwise floaty tune, whilst Terry adds a very light yet strong vocal melody. It’s easy to imagine this coming from one of the C-86 bands thirty years earlier, but that only adds to the timeless appeal. ‘Trip Over Clouds’, meanwhile, places some strong harmonies over a tune that bravely combines a hefty 90s jangle – a la peak Teenage Fanclub – with some Hawaiian guitar sounds, a brilliantly taut lead bass and strident rhythm, to create the ultimate in retro sounding indie rock. With a little more of a groove, the band seem happier to stretch out, before a really smart coda where a reverbed guitar cries against another crashy rhythm supplies another musical snapshot of peak Dot Dash. With ‘Airwaves’ placing a dual vocal over a rocky groove, it’s easy to be reminded of lesser-loved bands like The Mighty Lemon Drops and The Railway Children, and the love of mid 80s indie hits with such a nostalgic wave, it’s easy to forget that Dot Dash aren’t actually from a housing estate in the UK. Everything about this number is great, but there’s a genuine surprise to be found en route when fans of the style will a pitch perfect tribute to Peter Hook from bassist Hunter during the instrumental break, bringing – arguably – this album’s finest thirty seconds..

In comparison to most of the material, ‘Wokeupdreaming’ feels a little forced with its Velvet Underground drums, 60s echo and mono-friendly sounds, but its very nicely played, with Terry sharing some very thoughful guitar work, before ‘Dead Gone’ finishes an already enjoyable album, putting everything back onto a very familiar path with another really bouncy piece of post-punk/new wave. Here, a strident bassline calls back to Bruce Foxton’s work circa 1982, and a world of harmony vocals and handclaps add an almost Shoes-like pop sheen to the Dot Dash sound. There are musical flourishes that have a lot in common with a couple of this album’s other tracks too, but never a band to play anything completely straight, an unexpectedly twangy guitar adds several countermelodies and tones that pull from the early 60s and surf rock, giving the number a more cinematic feel. Whichever way you approach this number, it ends this record on a brilliant sugar-rush high.

From some rough and ready beginnings, Dot Dash have matured into a superb rock band with a brilliant melodic core. There are a few tracks here that could be considered a career best (‘Space Junk, Sattelites’, ‘Dead Gone’ and ‘Airwaves’ are just lovely), but it’s fair to say that most of the album’s twelve songs are very strong, indeed. Three or four listens will be enough to prove that the genuine sheen of ‘Proto Retro’ wasn’t just a fluke; if you’re a big fan of jangly, retro sounds and good, melodic indie rock, this is a record you really shouldn’t miss.