There’s no Grand Slam tonight; instead, the support slot has been filled by the very capable Sweet Crisis, who’ve more than set the mood. In the main, their music has trodden a well worn blues rock path, falling somewhere between Bad Touch and Big River, but between the Paul Rodgers tones of their frontman, some excellent riffs and an unexpected detour into Floyd territory on a tune that utilised the funky bit from ‘Echoes’ to great effect, they’ve been well received by those who’ve braved some atrocious weather and made to the venue for early doors.

It’s 8:45, and a half capacity crowd are patiently awaiting the arrival of their heroes. Somewhere near the stage, a woman is doing a fist-pumping dance to Journey’s ‘Separate Ways’ as it comes across the PA system, quickly switching to an arm waving routine for Roxette’s ‘Dressed For Success’ which makes her look like a Lesser-Spotted Blonde Mulleted Eagle. Looking further around the venue, there are almost certainly a few faces who were at the Islington show back in April, and everyone seems to be in very good spirits, guaranteeing a good send off for this run of shows.

Seeing the band walking through the audience to get to the stage somewhat decreases the anticipation, but once Steve and the boys are midway through a chunky ‘Syncronized’, everything feels far more natural. The number represents one of the night’s harder workouts, and the keyboards are occasionally lost in the noise, but it’s immediately clear that Steve Overland is in good vocal shape, and guitarist Jim Kirkpatrick has arrived with some serious chops. That’s great, but it’s a trip back to the late 80s via ‘Bad Luck’ before bouncing back into the semi-recent with a terrific version of ‘Life Is A Highway’ really signifies the beginning of a superb gig. 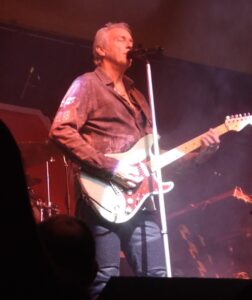 New song ‘Long Road Home’ allows Overland to stretch out vocally, and the quieter moments allow a still amazing voice to carry much further. A highlight from ‘Thirteen’, this track not only shows how FM still turn out top notch AOR tunes, but also showcases keys man Jem Davis as a talented writer. Each member of the current line up brings something special to both the band’s musical blend and this night’s performance, but this rendition of a fine tune is genuinely special, with Overland in full flow. A nod to 1991’s ‘Takin’ It To The Streets’ via ‘Crack Alley’ brings a couple of bluesier riffs from Jim to bolster a solid melodic rock sound, and fan favourite ‘Everytime I Think of You’ is a timeless reminder of the band’s AOR credentials. On this older tune – also recorded by Mr. Big’s Eric Martin in 1987 – there’s a much cleaner sound all round. With more focus on Jem’s keys, and a warm bass sound from Merv Goldsworthy coming through in waves, it all feels pretty timeless, and deeper cut ‘Crosstown Train’ provides a great ringing riff, leading into a brilliant hard rock crunch, with Jim launching into some great lead work throughout. You might think that bouncing between the 80s tunes and something from the 2010’s in this way might be jarring, but it’s nothing of the sort. If anything, it’s a great advert for how consistent the band’s output has been.

The bulk of the main set has been terrific, but somewhat predictably, its the climax that really shines, with a voyage back into bigger AOR territory with classics ‘That Girl’, ‘Tough It Out’ and ‘I Belong To The Night’ pushing Jem’s bell-like keys higher in the mix, and Overland further showing that his voice has lost none of the magic from his youth, before recent single ‘Turn This Car Around’, again, more than proves how well FM’s current material stands up against the classics. The band give the number a welcome extra punch in the live setting, and with a little crowd participation along the way, it’s clearly already a fan favourite.

In the hands of most, that would be a great finish, but FM push a little harder for a superb encore where a stripped down ‘Story of My Life’ – played in the main by Steve and Jem – supplies the biggest vocal highligh, and the pure AOR of ‘Other Side of Midnight’ sends the audience home with one of the catchiest hooks ever. With so much top notch material to choose from, it must be difficult for FM to put together a setlist that pleases everyone, but they’ve managed it tonight, and what’s more, it’s sequenced perfectly, ensuring there’s no sag and each section comes with a definite climax.

At a time when various seasoned rock bands seem a just a little too long in the tooth or have become too rough around the edges, it’s a pleasure to see a now “vintage” band who not only still cut it, but play with as much vitality as ever. The FM show isn’t just about nostalgia, either; the new material really hits the mark, and the band obviously believe in it, which brings a great dynamic to an already strong legacy. For a final night of a great tour, the Dover Booking Hall seems a little low key in terms of venue, but for those who’ve only seen the band at medium sized shows and from a relative distance up and down the UK over the years, this opportunity to catch FM in very close proximity has been very welcome indeed.