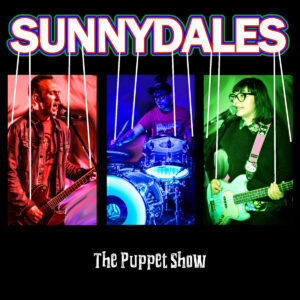 Stretching out a little from past works, ‘The Dark Age’ provides an instant highlight by placing a deep croon against something that sounds like one of Ramones’ more melodic affairs from the 80s. Matt Mollusky’s vocal style could also be likened to past Misfits work in a couple of places, but it’s obvious he’s reaching for that darker side of Joey Ramone’s talent – as heard on those more undervalued albums like ‘Animal Boy’ and ‘Mondo Bizarro’ – but what’s most important here is that he’s doing a brilliant job. All the while he’s immersed in an emotive performance, the rhythm section are locked into a tight pop punk groove. With a great selection of muted chords on the verse and branching into huge, overdriven crashiness on a chorus and beyond, the sounds are tried and tested – that sort of goes without saying – but this blend of Ramones obsessions and light horror punk serves Sunnydales very effectively.

For those looking for something with a bit more speed and punch, the minute long ‘Gingerbread’ presents the kind of no-nonsense Ramones homage that most punks are able to crank out in a heartbeat. You’ll find many similar works on previous Sunnydales EPs – and a thousand other releases the world over – but despite its generic core sound and brevity, this track still holds up extremely well thanks to some great harmonies from bassist Emilia Guadarrama, the occasional drum fill that’s obviously derived from ‘Teenage Labotomy’, and a fantastic final hook. Musically, it may be predictable, but a rousing “whoah-oh, gingerbread!” lyric certainly takes this pop punk into uncharted territory. Equally short and sharp, ‘Some Assembly Required’ could easily be an old Screeching Weasel leftover from 1999, but it’s none the worse for its over-familiar nature. Mollusky’s rhythm guitar work is especially sharp and the way he and Guadarrama harmonise throughout lifts a great melody, further showing the Sunnydales’ brand of punk in a very favourable way.

The remaining pair of numbers show these Fresno-based punks further retreating into a comfort zone both musically and lyrically, but if you’ve stuck with the band over the previous couple of years, you’ll certainly find something to enjoy. ‘Becoming – Part 1’ fills a couple of minutes with a solid Ramones-ish, riff heavy workout. Although its a number that takes a couple of extra listens to fully appreciate, and at first seems bigger on lead guitar breaks than obvious hooks, eventually the refrain referencing “coming home” shines through, while the title track throws out a much punchier riff, underscored by a really loud snare drum. In terms of the Ramonescore sounds Sunnydales have sought to emulate, they absolutely nail them here: the main riff could be any number of Ramones tunes from 1977-79 thrown into a blender and happily regurgitated, but there’s a brief breakdown blatantly lifted from ‘Beat On The Brat’ but sped up for extra punch which will certainly raise a smile. Some great music coupled with Mollusky absolutely perfecting his Joey Ramone impersonation during the first verse should’ve been enough to make this another highlight, but lyrically, a one-line repeated refrain of “ooooh, it’s a puppet show” never really gives the arrangement the huge send off it deserves. Still, it’s a minor point, and if you’re the kind of listener who enjoys this kind of good-time Ramonescore purely on the strength of a riff or two, it’s still guaranteed to please.

With these five songs, Sunnydales often improve on their previous works, while still giving extant fans essentially more of the same. What the songs lack in obvious originality – even their once fresh angle of a Buffy theme now seems to veer towards the predictable – they make up for with confidence and gusto. In terms of tightness, Sunnydales rarely sounded better, and with an increased use of harmonies in a few places, their sound certainly gains some extra depth. In short, predictable or not, this is still great Ramones obsessed pop punk, and you’d be a fool to miss it.

You can grab a free download via the Bandcamp link below, but if you’re able to throw a dollar in the hat, the band would certainly appreciate it.