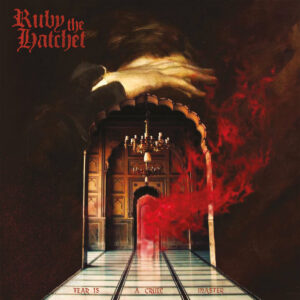 Ruby The Hatchet made their first inroads into a recording career with the self-released ‘Ouroboros’ in 2012. Aside from the occasional one line hook, the DIY recording captured the raw talents of a brilliant stoner rock/deep psych band. With riffs heavily indebted to Kyuss’ majorly influential bottom end noise and Black Sabbath’s doomy origins, the band immediately had a strong musical root, but in vocalist Jillian Taylor it was clear they had something very special. Taylor’s clear and strong delivery always gave the music a melodic edge that other doomy bands didn’t always have. Even at such an early stage, her clean, crying style often lent the material a brilliantly haunting feel that would be hard to beat.

The following years saw the band climbing through the stoner metal ranks, eventually signing with Tee Pee records for 2015’s ‘Valley of The Snake’, and perfecting their doom/stoner rock sounds on 2017’s ‘Planetary Space Child’, an album which scored Ruby some very enthusiastic online press. Always a hard working live act, like most bands, they were forced to take a backseat during the escalating global pandemic. With rehearsal time, studio time and gigs off the table, it would be easy to lose momentum, but on the basis of 2022’s ‘Fear Is A Cruel Master’ – their first album for Magnetic Eye Records – it’s clear that this downtime wasn’t time wasted. The record presents some of Ruby The Hatchet’s finest crafted material to date.

Wasting no time in presenting Ruby’s punchier side,‘The Change’ opens with a wash of space rock synths, before dropping into a riff that sounds like Fu Manchu reworking an older, harder Hawkwind inspired groove. As the tune gains traction, the band’s blend of stoner fuzz and good time rock ‘n’ roll really comes alive with a brilliant riff locked down by a really taut drum sound. The unity between guitarist Johnny Scarps and drummer Owen Stewart is amplified further during a couple of well placed instrumental breaks, but it’s quickly clear that Taylor remains the band’s not-so-secret weapon, as she makes the tough melody fly via a terrific, echo laden vocal that manages to meld the other worldly qualities of Stevie Nicks with the rock cries of many an 80s AOR icon. The marriage of the tough and the sweet continues to keep Ruby as interesting as before, but there’s a feeling that with this track, they’ve really perfected their art: the riffs are solid, the chorus is hooky, and the commitment to a really hard groove comes through more than ever.

Are the band able to follow such a strong start just as effectively? The answer is a resounding yes. ‘Deceiver’ allows everyone to stretch out across six minutes, fully working a hard, bluesy groove that captures a really dirty tone from Johnny, whilst Jillian contrasts the early Blue Oyster Cult meets Dio-era Sabbath mood with a very 70s influenced performance. The clarity of her voice, as with the best Hatchet sounds, continues to be a very effective contrast with the music that’s been set in place, but here, it never dominates. There’s time enough for a really retro guitar solo or two, and on the occasions where bassist Luke Muir cuts through, his playing conveys a really muscular sound like a cross between peak Geezer Butler and Glenn Hughes. At the point where you think you know exactly where this track is bound, it takes a massive twist, throwing in some very metal-centric twin leads which are used to bolster the second half of the number when the band hit upon a much busier groove. It much suggests the music was created as a collective rather than by a singular talent with the rest falling into place. In terms of no nonsense retro rockers, it absolutely slays, and the slightly fuzzy production sound really serves the material well, giving it just enough punch, but not so much that it detracts from a pleasingly live feel.

Moving through ‘Primitive Man’, there’s a little more of a stoner vibe, but an increased use of organ also feels reminiscent of proto-stoner sounds Zior and the heavy blues of bands like Leaf Hound, but again, played with a more modern twist. The jam band qualities of the main riff are superb with the rhythm section working impressively hard, but for the long time fan, it’ll often be Taylor’s vocals that remain the big draw, and she attacks the lyric with a force that brings out the best in her bluesy tones, which overlaid with more echo, reinforces the band’s love of a deep psych sound, before ‘1000 Years’ drops into some really haunting, heavy blues. Arguably the album’s centre piece, it features a great, descending riff – played by Johnny with impeccable tones – leading into a verse where Jillian gets to adopt a full scale cry. Those two factors would probably be enough alone to make it one of the record’s stand out cuts – it captures the more ominous side of the band almost perfectly – but it’s actually outshone when the climax of the track wheels out a few Sabbathy riffs set against some really broad harmonies. This once again showcases Ruby’s dark yet melodic core with ease.

Into the second half of the album, things don’t weaken in any way. If anything, they get more interesting when ‘Soothsayer’ applies a spooky blues intro with heavy keys and saxophone sounds to a stomping boogie rocker. The music might be a little simpler, but that doesn’t mean it’s any less well crafted: Johnny’s guitar sound has a brilliant crunch even when channelling Status Quo circa 1976, and the more rigid rhythm gives keys man Sean Khan Hur more room for manoeuvre and he fills the earlier part of the track with a brilliant 70s swirling sound which, although still too low in the final mix, has echoes of peak Ken Hensley. As is often the case, the latter part of this great number focuses a lot more on the guitar work, while Taylor hits a massive vocal peak. It might be a little simplistic for those who’d be more in tune with the previous album’s galloping psych-fest ‘Pagan Ritual’, but it’s great to hear the band aren’t just stuck in a rut, recycling things from within a comfort zone. In any case, multiple listens should unveil some great touches throughout, especially in the bass department, making it a solid addition to the band’s growing catalogue of superb tunes.

Released as a single ahead of the album, ‘Thruster’ is a little more commercial, without actually being commercial, if that makes sense. It features a similar galloping groove to bits of ‘Pagan Ritual’ but uses that very differently to underscore a big 70s rocker where the jagged rhythms are regularly intercut with a melody that sounds as if it were derived from a 50s horror movie. Before long, the whole band appears to be having a great time cutting loose on something that sounds like Ruby The Hatchet getting lost in a proto-stoner soundscape, but the addition of an old fashioned lead guitar break and more evidence of Taylor’s natural affinity with a very strident vocal suggest the makings of an instant fan favourite. In a complete change of mood, ‘Last Saga’ drops some purer blues where crying lead guitars are more of the Taste variety, and in a turn at the mic, drummer Owen offers a really strong vocal that draws from some more great 70s stock, as he sings with passion and clarity between the riffs. When heard in harmony with Taylor for the second verse, it really brings Ruby’s classic influences to the surface, and although the stoner/doom crowd might well find this a little light, there’s no denying it’s melodic strengths. Finally, ‘Amor Gravis’ closes a brilliant album with a complex workout that takes metal tinged riffs and alternates them with slow, moody blues passages, effectively bringing both spheres of the Hatchet sound together. When going at full pelt, the tune places busy snare drums against a really dirty guitar, working a riff that occasionally sounds like a cross between ‘Born To Be Wild’ meeting with something from Judas Priest’s ‘Killing Machine’ LP. When slowing down, the Sabbath-esque blues allows Taylor to soar once more, but whichever way you approach it, it has a real heart that beats incredibly strongly throughout.

For those who jumped on board with ‘Valley of The Snake’, ‘Fear…’ is an album that really won’t disappoint. Its forty minute playing time evokes the best of the 70s rock and metal boom, but as before, it presents a band who’ve brought their own talents and interesting twists to a classic, groove laden sound. It’s a worthy successor to ‘Planetary Space Child’, and has plenty in common with Ruby The Hatchet’s past, but at the same time, very much looks forward. It’s the sound of a band who’ve now reached maturity and sound capable of reaching an even bigger fan base. An essential disc.