Following the pandemic lockdown, gigs have been very much back on the table throughout 2022, but for some people, there still seems to be an unease about returning to the fold and sweating it out with others in very close proximity. That might account for tonight’s Abdoujaparov show feeling a little…undersold. It might also be down to the fact that bandleader Leslie George Carter doesn’t always seem keen to trade off his Carter USM past, often preferring to let this band attract people on their own merits, and relying on fan knowledge to attract a crowd. You’d think between the presence of an indie/punk legend and it not being a school night, Ramsgate Music Hall would be packed, but whatever happens, those who’ve come out tonight know they’re in for a great time.

After the members of Abdou wander across the venue and take to the stage, the attendant audience greets them with enthusiasm, and Les responds with a massive grin – something that will barely leave his face for the next hour – and their performance is electric. It’s also incredibly shambolic, occasionally in danger of falling off the rails completely, but is never less than a hundred percent fun.

Hammering through ‘Abdoujaparov Theme’ as an upbeat opener, the tone is very much set with the audience latching onto its shout-along hook, and with Les attacking his guitar to send out a high octane punky rhythm. The sound mix is a little trebly, occasionally meaning vocals get lost in the noise, but it’s still genuinely thrilling to see this band back on stage, before ‘Emergency Medical Hologram’ keeps up momentum with a barrage of bigger and punkier riffs during the intro. The sound mix levels out and Richy Crockford’s bass wields a hefty sound throughout the verse and beyond – his bottom end is often in charge of supplying the real power in the band’s current live incarnation – whilst Les shouts into the mic, all the while throwing out punky power chords by the dozen. It’s a tune that, on record, sounds a little like one of Carter’s early b-sides, but it comes into its own here with guitarist Jon Barnard launching into a furious rock and roll guitar solo.

The first of the evening’s newer tracks, ‘George’, inspires a few people to sing along with the chorus but, as expected, it changes the mood with a more mature approach. This doesn’t stop anyone having a great time – not least of all the band – and the smiles and glances shared between Les and Richy are a sign that the band are having a much of a great time as the fans and casual onlookers present. From here, everything steps up a gear or two, if not in performance quality – there are various lyrical miscues throughout the very difficult ‘Bodypart Superstore’, a tune that Les seems relieved to get through – but certainly in energy and spirit. Having raced through ‘Superstore’, Carter takes a mouthful of beer and jokes how “every sip leads to something else being forgotten”, but it doesn’t matter; the more ramshackle the band appears, the more the audience is on their side, and after spirited, almost rehearsal-like run throughs of ‘Fingers’ and ‘Everything Is Free’, it feels as if the band and audience are all friends together, with Carter very clearly relishing the experience.

There’s time enough, too, to demonstrate the band’s more off piste styles, with ‘Benjamin & Jumble’ playing like a punky take on a country two step. Replacing the album’s fiddle solo with a massive guitar part is actually a master stroke, and despite the loose approach most of the band have settled into, new arrival Jon – who appears to be cosplaying as the BFI’s Vic Pratt over on stage left – shows off a really flawless technique and tone. In some ways, ‘My Little Life’ is the archetypal Abdou number with its self depreciating lyric and classic indie backdrop, and despite being an older b-side, it supplies another of the set’s highlights. The more loyal fans latch onto it immediately, before everyone is encouraged to sing along with the main refrain. Participation seems a little on the tentative side at first, but by the final round, the audience’s collective non-singers seem more at ease.

Alcohol is a recurring theme within Les’s lyrics, and ‘There’s A Monster In My Garden’ allows him to share bad experiences, almost in a musical therapy style. The tune is resplendent with it’s hugely buoyant approach, making a tale of indignity sound almost celebratory, and this performance finds the band really hitting their stride – or as much of one as a wonderfully loose Abdou can muster – before ‘Ultra Cool’ blends shouty gang vocals with an unrelenting indie punk riff. In line with a couple of tunes nearer the beginning of the set, it’s Carter’s rhythm guitar that dominates, but the slightly distorted sound comes across brilliantly. Watching Les beaming from ear to ear during the moments he’s not required to sing, it’s clear he’s still having fun. A second dip into the excellent ‘Cycle Riot History Gang’ LP allows drummer Bomber to kick things off with a riotous rhythm before the band throw themselves head first into a tune that, on this night, could pass as a blend of These Animal Men and Buzzcocks. A man in a bright orange shirt at the front of the audience bounces about with absolute glee, and although everyone else seems sedate by comparison, looking around the venue there are bobbing heads and big smiles abound. …And although that seems like a punchy Abdou, the full throttle ‘Brixton Flippin’ Riots’ (a highlight from 2021’s excellent ‘Race Home Grow Love’) delivered with a swift punch immediately after almost takes the roof off…

Pulling into the end of the main set, a bouncy ‘Maria’s Umbrella’ leads into a much chunkier ‘Beer Scooter’ where the twin guitars drop into a slower 70s rock vibe. It’s here that Carter’s pre-punk tastes make a rare turn in influencing the material, and despite the massive change in mood, the sound is superb. This actually becomes Barnard’s big moment as he slides from the massive riff into an almost bluesy solo which, as before, really shows off a great tone. It would be remiss to leave the audience on the set’s only downbeat number, though – as brilliant as it was – so the uber-punky ‘Fish Face’ lifts everyone back up, encourages orange t-shirt man to do the pogo (solo) and most other people to shout at the top of their lungs. As far as pure punk bangers go, it’s one of Abdou’s best and a perfect closer.

The first unplanned encore brings a welcome return of the Abdou theme – only this time with much less participation, the audience having lost the last of their voices – and a welcome throwback to ‘Aren’t We All (Hero)’. Something of a highlight from those early Abdou shows back in the noughts, the track sounds as good as ever, before a sharp cover of the Buzzcocks’ classic ‘Ever Fallen In Love’ – with Richy handling lead vocals – adds something even more familiar. Since nobody appears ready to leave, there’s further discussion about another encore, with a couple of suggestions quickly discounted for being too difficult, and an audience suggestion of ‘Me & My Dog’ is greeted with laughter and Les suggesting that he “didn’t even know it when [he] wrote it!” Finally, it’s ‘Hit Her With The Pig’ that gets the honour of the final curtain call in a brilliant but loose set, and although it pales a little in comparison to the rest of the unplanned encores, its role at the end of a nineteen song marathon is clear: it’s punchy approach will surely send everyone off with a feel good melody and a solid reminder of why they’ve continued to love this most cult of bands for twenty years.

There have been some very well received shows at the Music Hall in 2022 – ranging from Martin & Eliza Carthy, to Jah Wobble, to proggers Field Music – but this has certainly been the most unashamedly fun. Despite there being people out there who’d argue for a more professional approach to performing, to experience a band living in the moment – warts ‘n’ all – creates a far more memorable experience than watching musicians replicating their studio output verbatim, and just going through the motions. This gig might have been lovingly ragged, but for those present tonight – those very much “in the know” – a great time has certainly been had. 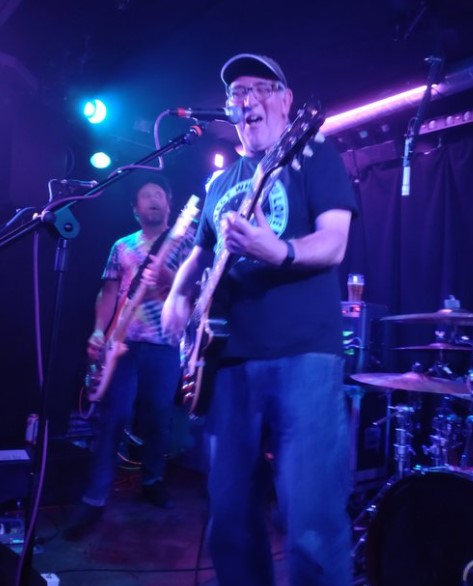