The beginning of September 2022 has been horrible. The British government has all but fallen apart, bumbling from day to day; energy prices have reached a new level of unaffordable, and the corner of Kent where the Music Hall sits, proudly but unassumingly in a seaside back street, has been battered by apocalyptic weather for what now feels like an eternity. The summer has started to feel like a distant memory. On top of that, The Queen has died. For most people – monarchists or otherwise – this has more than added to an escalating feeling of unease. Most people have no knowledge of a world without Queen Elizabath II on the throne, and somewhat predictably, the internet has quickly descended into factions, either mourning or gloating. It’s fair to say that a distraction is in order.

Tonight’s show from Martin & Eliza Carthy at Ramsgate Music Hall is the distraction we all need, but this show from the father and daughter folk duo has felt a long time coming. Originally scheduled for November 2021, it got postponed until March ’22 and then cancelled. Just as most people started to think it would never happen, it was then re-announced, and almost a year down the line – not before time – the Carthys are set to put in a most welcome appearance on a drab Thursday night.

For those not already aware, in terms of British folk, the Carthy family tree presents something of a dynasty. Martin Carthy was an early member of Steeleye Span, later becoming an important part of The Albion Band and Brass Monkey. He’s recorded an impressive solo catalogue and also released work as a duo with Fairport Convention’s Dave Swarbrick. The man is now part of the DNA of the scene. His wife Norma Waterson was a member of The Watersons, a folk singing family who released a string of albums over forty years – some of which featured Martin – and their daughter Eliza has become a vital part of the next generation of performers, twice nominated for the Mercury Music Prize and awarded an MBE for services to folk music in 2014.

As Martin appears from the venue’s trap door, dressed in brightly coloured shirt, taking his place on stage right/audience left, and Eliza follows him, carrying a bottle of Gadd’s Number 5 – a top local beer – any worldly worries quickly start to fade. There’s much amusement at the first number being known as ‘Daughter From The Dungeon’ (among other names) considering how Ms. Carthy has just emerged from the venue’s basement, and as Martin starts to pick the opening notes on his guitar, the venue falls absolutely silent. The ensuing performance falls somewhere between introspective and busy, and Martin’s guitar work remains on point, but his voice is a little sketchy. This is only to be expected for a man now into his ninth decade on the planet and the fact that he’s still taking stages to loving crowds is truly impressive. Any early set shakiness is more than made up for by Eliza, a woman whose voice appears to have only become richer over the past decade. Harmonising together, they sound great, with Martin adding a fragility to the tale that’s actually very much needed, whilst Eliza applies some brilliant violin textures. Moving through the slightly jazzy ‘Happiness’ Eliza takes the mic and her voice conveys a smooth yet loudish tone that carries right to the back of the venue. With just solo voice and acoustic guitar, it’s a performance that’s striking in its purity, and so much richer than its studio counterpart. This is the kind of performance that’ll turn any casual admirers into true fans.

Having warmed up nicely, ‘Blackwell Merry Night’ allows for the first of the night’s jigs, with Eliza approaching her violin with enthusiasm whilst telling a tale of a party which, apparently, “was so good, people are still telling about it two hundred years later”. The natural sound in the venue really comes into its own as Eliza occasionally stomps on the stage for percussive effect and the cry of her instrument soars above the small crowd. For something modelled on an old jig, it isn’t too busy and fits the mood of the night brilliantly, before a partly rewritten ‘High Germany’ (played by Martin as a solo piece) brings the mood down to something a little more solemn, but the attendant crowd appear to be hanging from every word and soaking up a great atmosphere as Carthy Sr plays through a lovely acoustic arrangement.

The Carthy’s own take on ‘Awake, Awake’ (now called ‘Waking Dreams’) sounds beautifully sparse with Martin plucking at intermittent notes against a crying vocal that works a very traditional melody. As expected, Eliza’s performance is flawless – achingly beautiful even – as she brings the traditional melody (c. 1890s) to a modern day audience, her voice conveying a soft and mournful quality that’s perfect for the job in hand. It quickly takes its place as one of the night’s highlights, before a couple more folky numbers pass by in a blur.

A double bill of ‘Grand Conversation On Napoleon’ and ‘The Elephant’ appears to take a long while to unfold, but it gives the appreciative audience a broad opportunity to watch the musicians at work as they weave through busy instrumental passages and retell a couple of particularly wordy tales. For any of the more hardened folkies in the audience, it’s sure to be one of the night’s highlights, but for the more casual fan, that’s quickly eclipsed by Eliza performing a solo a cappella rendition of ‘The Snow It Melts The Soonest’ – recently re-recorded for an upcoming collection of reworked songs – which confirms just how powerful her stage presence is. She’s even unfazed by a false start, after deciding she’s come in a little too high. This is covered with a typical humour, very much treating the off-key moment as if she were just singing for friends.

In terms of audience appeal, the shaggy dog tale of ‘Young Caraboo’ – a woman thought to be royalty, who was actually just a common cook – joins ‘Blackwell’ for all round entertainment value. It’s a number where the storytelling is in danger of outshining any musicianship, but things end on a massive high when ‘Died For Love’ – a trad number stolen from Eliza’s uncle, Mike Waterson – encapsulates the heart of the Waterson/Carthy clan’s style, and a stellar version of the traditional ‘John Barleycorn’ allows for some terrific harmonies. Martin’s voice has been much stronger during the night’s second half, and his treatment of this number conveys a genuine strength via his acoustic, and a world weary tone in his vocal brings a pleasing reality to the bleak narrative. For any rock fans who just happen to be present, this is a real treat, since the traditional tale is well known outside of folk circles thanks to a storming version from Traffic, recorded in 1970. Hearing Martin and Eliza work through the familiar melody is a welcome reminder of how little Winwood and Chris Wood altered the arrangement for their own folk-prog epic.

Most shows at Ramsgate Music Hall feel special. That has a lot to do with the venue itself – even a packed house feels intimate – but tonight’s set from these folk legends Martin & Eliza Carthy has felt a little more special than most. Part of that is to do with allowing the audience to detach from the real world, but mostly its to do with the love and warmth coming from the stage at all times. The loose banter between father and daughter is natural, funny and entertaining; the music, so often drawn from centuries past, retains a magic that’ll be passed down to future generations. This has been a great celebration of Martin and Eliza’s 2014 release ‘The Moral of The Elephant’, but so much more than that – it’s exceeded already high expectations. If you’ve never seen Martin & Eliza in performance – or Eliza solo – you owe it to yourself to put that right. In Eliza’s own words, “folk gets everyone in the end”, and there’s no better way to appreciate these oft-traditional works than to be immersed in the live experience. 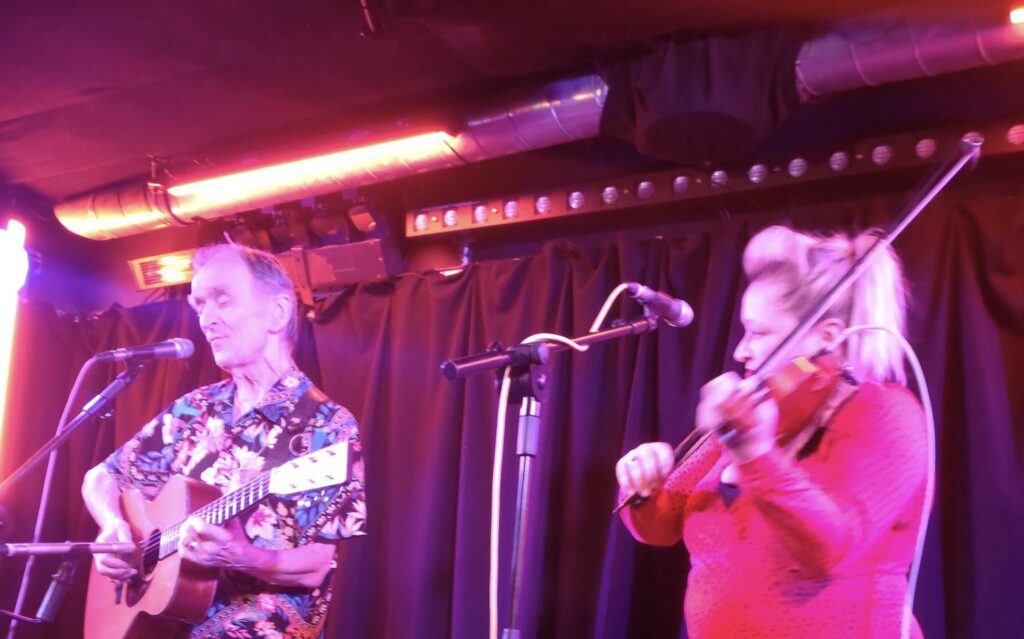