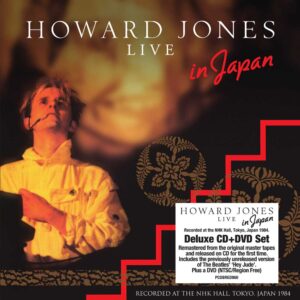 The huge box set reissue of Howard Jones’s ‘Humans Lib’ was a real treat for fans. A multi format set, it presented the classic album with a wealth of bonus materials, including unreleased demos, alternate versions and radio sessions. The biggest draw, though, came from its visual content. The lavish set finally gave a DVD release to the long out of print ‘Live In Japan’ VHS, much to the delight of almost everyone.

Unfortunately, that box was both prohibitively expensive and a really limited run, meaning that only hardcore fans would get to see that footage in decent quality, and in some cases for the first time in many a long year. Luckily, the 2022 release ‘Live At The NHK Hall, 1984’ comes to the rescue, since it offers the same film at an affordable price, but improves upon the previous release by presenting it alongside an uncut version of the audio soundtrack.

Granted, the film itself isn’t always the most visually stunning as far as concert movies go and is a little murky in terms of picture contrast and brightness, but the performances are absolutely wonderful. HoJo spends a lot of time fairly rigid behind his keys, but with the aid of a radio mic, he’s able to stroll around the stage a bit whenever longer pre-programmed musical loops allow. His face painted matey, meanwhile, fills space when required, supplying a lot of amusement bending around the stage and appropriating various mime routines for his own use. The audience seem to love it, and although are reasonable sedentary themselves, occasionally cut loose their shackles of good behaviour and explode into a bounce. This is most obvious during ‘New Song’, spurred on by Howard at his most animated – even pulling an embarrassed girl from the audience for a dance, pre-dating Bono at Live Aid. For those watching at home, strong performances of ‘Pearl In The Shell’ and ‘Like To Get To Know You Well’ are bound to evoke some very nostalgic memories of Howard on Top of The Pops. From a visual standpoint, although it’s all enjoyable in a 1984 sort of way, it’s the versions of ‘Bounce Right Back’, with Hoile juxtaposing a 1930s gangster suit with 80s shades, and ‘Equality’ capturing him in top mime, along with the brilliant ‘New Song’ that represent the show’s best moments.

As for the audio, it’s all pretty much essential, aside from a version of ‘Conditioning’ which goes way off piste with a couple of classical interludes and a really misjudged venture into the traditional Scottish tune ‘Loch Lomond’ which, obviously, nobody really needs to hear. Aside from that, the renditions are very faithful, but there are still enough subtle differences that stand out. ‘Like To Get To Know You Well’ comes with a decent punch – or at least as much as such a pre-programmed set up can offer. Across the fourteen tracks, Howard’s very 80s brand of mechanics really sparkles, with the underrated ‘Hunt The Self’ rattling apace with its jaunty rhythm and parping keys presented closely to the studio arrangement, but somehow sounding a little more urgent. Any sense of extra energy is probably due to the unmistakably Japanese screams that pierce through on occasion, but it’s definitely got an atmosphere of its own. Even better, ‘Bounce Right Back’ (an early outing for a track from the yet to be released ‘Dream Into Action’) showcases some hard and deep synth sounds across an extended intro, and although nothing would ever make the faux rap elements of the vocal any better, its musical basis appears here in a much grander way.

‘Always Asking Questions’ comes closer to showing why Howard was one of the era’s finest creators of pure pop, with a smoother vocal floating in an out of hard beats, with only a little echo and a clapping audience giving away the live source, and at the other end of the scale, he gets more of a chance to stretch out via ‘Hide & Seek’s long, almost soundtrack-like opening, taking the alluring pop ballad into a place that is incredibly powerful considering the lack of real instruments involved, and although it plays faithfully to its studio equivalent, deep album cut ‘Dreams of A Better Place’ is greeted with a huge enthusiasm from the Japanese crowd.

As with a lot of Howard Jones shows from the first half of the 80s, it’s the hits that often gain the most applause and interaction, and this is no exception with great versions of ‘What Is Love?’ and ‘Pearl In The Shell’ waiting to be rediscovered. Even the greatest bits of this show can’t match ‘New Song’, however, chosen to provide a superb climax at the tail end of a great set. The whole evening has been very good natured, but thus conveys a real sense of fun with Jones introducing it with an enthusiastic “yes, yes yes”, and even applying a slightly looser vocal during the chorus. The main keyboard riff adopts a different tone to the oft-heard studio cut; the crowd fills in a world of “woo hoo hoo”s along the way and, eventually, Howard takes the track into even greater places by dropping in the piano solo similar to the “New Version” of the track and a few pentatonic riffs – obviously playing up the Japanese environment – before dropping into a synth generated funk bass solo that makes everything sound like Herbie Hancock circa 1983. Peaking with Jones talking to the audience in Japanese and encouraging them to sing in a call and response, this ‘New Song’ stretches to a full nine minutes to create an especially strong finish to an already enjoyable show.

For the Howard Jones completist, this release’s biggest draw will come from the unreleased version of ‘Hey Jude’. Absent from the VHS and Laserdisc releases, it’s still missing from the DVD included in this set – presumably due to poor quality or damaged/lost source materials – but it’s good to hear the long lost audio. However, it’s fair to say that it is little more than an interlude that may or may not have been planned in advance, but there’s still a joy in the stripped back piano arrangement and the audience filling in the now legendary “na na na”s.

The audio alone should be enough for those who forked out for the big box set in 2018 to want this, but it’ll likely be welcomed even more enthusiastically by those whom had to “make do” with the cheaper 2CD/DVD reissue of ‘Human’s Lib’ at the time. After all, this release now means that only a handful of alternate takes remain exclusive to the mega box, and approached on its own merits, this is an absolutely terrific release. Its historical – and occasionally hysterical – entertainment value is huge. Strangely, it sometimes feels more like a companion to the 2CD release of 12”s than ‘Human’s Lib’ itself, but for any self-respecting fan, it certainly deserves the shelf space next to your other HoJo reissues.