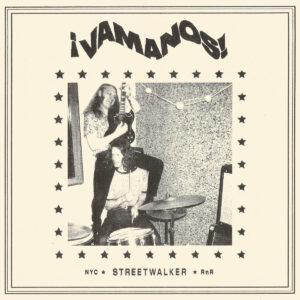 This third release from ¡Vamanos! presents somewhat of a musical sidestep for the New York based noise making duo. On their first two releases, they delighted in taking blues and garage rock sounds into the most distorted corners of their musical imaginations. On this third release – a full three years on from the thrilling 45rpm 10” – Alex Knoche (gtr/vox) and Tyler Bower (drums) manage to be a bit more melodic without actually being that melodic…if that makes sense. Having worked their distorted blues to almost breaking point, 2019’s ‘Streetwalker’ EP applies a huge amount of grit to a set of tunes that draw from a few different influences than before, often delivering some of the fastest, loudest garage/punk ‘n’ roll sounds ever.

Kicking off with a track that makes the duo sound incredibly dirty, ‘Cheap Thrills’ makes great use of a riff that sounds like a supercharged Quo boogie before throwing itself sideways into a speed driven noise that plays like a collaboration between Zeke, the early Supersuckers and the ¡Vamanos! of old. Between a relentless pace and a truckload of distortion, ¡Vamanos! mark their return after a long break with style, but the way they break up the buzzsaw riffs with a brilliant use of stops and a shouted refrain definitely creates an instant impression. ‘Stab’ comes with far more of a rock ‘n’ roll vibe than the band have ever offered before. Behind the distortion and noise, the tune could easily be derived from Dictators, which is something Alex and Tyler seem to very much take in their stride. In terms of all round attitude, this number’s a winner as it has a great vocal, but the music’s always where it’s at, and by the time the all too brief instrumental break arrives with some really angular guitar noise, this becomes a potential garage punk classic.

Next up, ‘Bad4U’ is a genuine classic – the best ¡Vamanos! song to date. Between some furious lead guitar work and punked up riff, it offers so much energy within just ninety seconds. The drums are buried beneath a wall of guitars and a heavily treated vocal really brings out the various odd yelps and interjections in Alex’s performance. That might have even been enough to carry things through, but the inclusion of a really infectious hook somewhere within the speed and noise really sets things off perfectly. There are occasional throw backs to the early ¡Vamanos! in the way the riffs place volume above most other aspects, but whereas previously the duo would have lost themselves in some heavy garage blues vibes, this comes across as an absolutely brilliant homage to New Bomb Turks and should be heard by anyone with an appreciation of great garage-punk/punk ‘n’ roll sounds.

‘Anxiety’ continues in a similar vein, with full throttle guitar riffs and an urgent vocal. This time, with a full three minutes at their disposal, ¡Vamanos! have a lot of time and space to really cramk their riffs. A repetitious “not all right, not all right, not all right” hook creates a catchy as hell refrain, while Tyler locks down a fantastic rhythm, before Alex punctures the rock ‘n’ roll with various squalls of guitar distortion. It could have taken ‘Bad4U’s blueprint and been done and dusted by the time it takes most rock bands to complete an intro, but that would deprive listeners of a top notch drum fill, an angry lead guitar break – and, perhaps, most importantly, some brilliant repetition, ensuring this stays fairly memorable. Reverting to something a little closer to their beloved dirty blues, ‘I Don’t Care’ slows things down just a little even if the material isn’t any lighter. Behind the wall of distortion, a howling vocal and angry guitar take the weight of a chugging arrangement and the resultant sounds are so unforgiving, it even sounds like your speakers are broken, and a disdainful lyric lends a very natural accompaniment. For long time fans of the band, this will strike an immediate chord in many ways, but in direct relation to the rest of ‘Streetwalker’, it’s nowhere near as impressive.

‘Electric Shocker’ reinforces more love for New Bomb Turks and their ilk with another killer punk ‘n’ roll riff, this time mixing the noise with the kind of chorus that harks back to punk’s formative years. Knowing they’re on to something great, they effectively give listeners the same song twice within the two and half minutes, before bowing out with ‘Dark Thoughts’, a number absolutely loaded with fuzzy guitars and gang vocals. It almost recycles bits from earlier in the EP, but that doesn’t make it less enjoyable, and while there’s almost no common link with the first couple of ¡Vamanos! releases, there’s something great here that deserves to win them new fans. In fact, in finding such an affinity with garage punk, it even sounds like there’s much more mileage in their two man noise machine.

With sweat oozing from almost every second of its lean sixteen minutes, ‘Streetwalker’ might just provide some consolation for those who miss The Cramps and will definitely provide a quick thrill for those always on the lookout for great punk ‘n’ roll from the underground. ¡Vamanos! might sound a little more mature than before, but with that comes a career defining set of songs on a truly brilliant release.