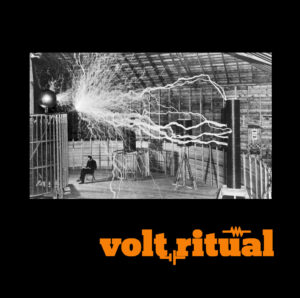 When it comes to mining classic influences, Polish stoner rockers Volt Ritual dig deeply on their debut release. Their self titled disc from 2022 takes the mighty Black Sabbath as its root inspiration and takes a very 70s approach to a heavy riff, but the material could just as easily have been recorded in the 90s at a time when Kyuss, Fu Manchu and Roadsaw were at their height. Its seven numbers are crammed with heavy riffs and fuzzy grooves; the production values call back to Rodger Bain’s early no-frills approach, and the band’s overall sound is one that a vast proportion of stoner and doom fans will take to in a heartbeat.

The album’s lead track, ‘Approaching Jupiter’ opens with a clean-ish, bluesy riff that immediately advertises the band’s retro interests, but its the arrival of a heavier riff that really sells the band. In under a minute, the riffs expand into a muddy mix of stoner and light doom, where an overdriven sound pulls the very best from the slower elements of Fu Manchu, and an echoing vocal accentuates an other worldly feel. In many ways, the slow and understated delivery of the lyric puts the voice in the realm of “extra instrumentation”, but it works. Eventually, a slow, bluesy solo that borrows from peak Groundhogs makes good on the opening riff, and a faster interlude tips the hat to the swagger of Black Sabbath’s ‘Fairies Wear Boots’. Proving to be far more than the output of stoner/doom magpies lifting from great sources, though, the track eventually wanders into a spooky instrumental section where tribal drums and a deep bass set up a great groove that advertises the trio’s musical skills in a more interesting way, before bowing out with some classic sounding sludge, where a DIY production job casts a murky light on some brilliant trad doom.

As if the band’s influences weren’t already obvious enough, the brilliant ‘Moon Sabbath’ drives the Iommi worship home with a mallet, first via a riff that isn’t always a million miles away from ‘Wheels of Confusion’, and then through several grooves that rely on a really flat drum sound and deep psych/blues guitar to keep up the momentum, before an extended coda makes a great feature of a jam band aesthetic. With drummer Marcin dropping in some superb fills and guitarist Mateusz launching into a couple of fiery leads, there’s a superb tension shifting back and forth, but not to be outdone, the final bars feature a smart bass solo courtesy of Michal, very much channelling Geezer Butler from the Sabbath debut, and fusing that with elements of Corrosion of Conformity. In a little under five minutes, the band show off most of their musical traits in a fairly traditional way, but when played with such conviction, it’s yet more proof that a solid stoner/doom sound never gets old.

Without missing a beat, the band then slides effortlessly into ‘Teufel Tanner’, a massive juggernaut of sound driven by a swaggering riff that sounds like a slightly heavier Fu Manchu. This perfect marriage of muddy riffs and crashing drums offers a direct throwback to 90s stoner sounds from the US, while an accented vocal – supplied by two voices in tandem – gives a very European twist. In some ways, the two main riffs appear to be everything, but closer attention reveals a superb bassline creeping through the retro fuzz, before a deep and howling guitar suggests something a little more bluesy. It mighn’t be as epic as ‘Moon Sabbath’, but overall, it’s one of the band’s most accessible numbers, worthy of returning to time and again. The shorter ‘Droga’ opts for something more melodic with a lead bass supplying the main riff, harking back to the darker proggy sounds of bands like Zior. The deep and warm sound is brilliantly contrasted by moments of clanging guitar – owing far more to garage rock than stoner – and this musical shift shows Volt Ritual to be more than the one dimensional rifflords that the first couple of tracks might suggest.

Elsewhere, ‘Wheel of Time’ blends a jagged riff with some hefty bass, encompassing some classic retro stoner riffs that, again, call back to Fu Manchu and Kyuss, but also tap into the moods of later bands like MissingMile and Black Rainbows. In stoner terms, it doesn’t ever break the mould, but between its steady groove and a couple of concessions to doomier sections bringing out an extra heaviness, it sounds great. That’s especially true by the time a lead guitar break rises from the swamp to present a multi-layered sound that fuses a couple of classic rock twin leads with something a little more dense, very much showing a love for mid 90s COC. ‘Low Orbit Blues’ is a fair bit weaker than most of the Volt’s material due to a mismatched vocal and riff. The riff itself is very strong, placing a few ascending riffs in a blues scale within more 90s stoner vibes, but a jagged vocal that spits its lyrics as if chanting a voodoo hex isn’t an especially good move. The voice detracts from the music in a way that it makes the first half of the track a little hard going. Luckily, a brilliantly executed guitar solo inspired by some heavy bluesy tropes saves face. Rounding out the largely superb material, ‘War In The Sun’ rarely steps outside of a comfort zone of slow blues redressed in early Sabbath threads, but there’s plenty about Matiusz’s chugging riffs, dirty tone and almost spoken vocal delivery that suggests a cult classic in the making. A simple vocal hook combined with a timeless riff is all that’s needed to make this miry, almost monolithic affair work, but a few lighter touches via the lead guitar give the riffs enough of a lift to ensure this slow, heavy blues is anything but leaden.

When a band lists their chief influences as Sabbath, Fu Manchu, spaghetti westerns and sci-fi novels, you instinctively know that they won’t steer you wrong. With six of its seven tracks being sure fire winners, from a classic stoner/desert rock perspective, Volt Ritual’s debut is everything you want it to be…and occasionally more. Its heaviest riffs stand up with almost anything similar you’d care to name, and their DIY production really brings out the best in a rather murky but natural sound. Despite some of the band’s ideas being a little predictable, this is one of the best stoner/doom releases of 2022.