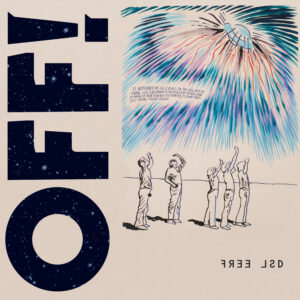 Running to thirty eight minutes, their long overdue return with ‘Free LSD’ captures an angry yet substantially different band. It’s also a double LP when measured against the debut’s almost unmatchable standard. Naturally, Morris’s unmistakable sneer and disdainful approach keeps things recognisable, but this new style OFF! – now featuring Thundercat drummer Justin Brown and …Trail of Dead bassist Andy Fullbright – is definitely more mature. It isn’t necessarily better: between some great moments, a lot of the material and the socio-political messages are smothered in arrangements that try to be far smarter than they need to be. OFF!’s once uncompromising hardcore is too often lost beneath a blanket of dark psych and garage rock clutter, stretching even the best short and sharp numbers into a twisting mess played by musicians who seem unable to commit to either a punk sharpness or world of heavy, jammed out riffs that could’ve propped up some great stoner tracks. By attempting to do both – and during most of the tracks too, despite most things clocking in at three minutes and under – it does neither as effectively as you know the musicians are able.

Right from the off (no pun intended), ‘Slice Up The Pie’ signifies a very different band via its intro where a wall of sound and buzzing guitars comes more from the MC5 world than that of the earliest Black Flag, and even when the track explodes into a set of tautly played punk riffs – very much driven by Coates – there’s a strange warmth that wasn’t there before. Morris’s voice is angry, yet different again: when spitting the chorus hook over and over, he channels the earliest OFF! material, but throughout the verses, there’s an older heart; a world weariness that at once suits the track, but doesn’t quite reach full potential. Overall, it’s the kind of opener that really sets a tone. As unexpected as the new, slightly looser musical approach is, along with a retro fuzziness that wasn’t their before, there’s still the feeling that this could pack a punch, but they’re being held back by too much fussiness. The fact that this number doesn’t quite hit the mark is a little irksome, but it’s just a sign of things to come. Things take even more of a left turn when ‘Time Will Come’ mixes elements of hardcore punk with a really unsettling garage rock grumble, as thundering riffs are intercut with strange neo-psychedelic noise and Brown adds a really busy rhythmic approach. Shifting between high octane riffs and a meaty garage rock groove, this is a number that clearly wants to instil a feeling of genuine anxiety within its listeners – a job it does well, but never in the most expected or obvious way. Again, it leaves a feeling of being created Frankenstein-like from two or three half-formed ideas, relying on Morris to act as the glue to hold everything in place. Luckily, even now pushing 70 years old at the time of recording, Keith isn’t about to go either quietly or in any way that’s uncommitted, so there’s still enough entertainment value here if you’re a fan of his abrasive style, but not necessarily looking for anything deeper than an unrelenting anger.

Further proving to be more than a hardcore machine, OFF! drop into some furious noise rock throughout ‘War Above Los Angeles’, a tune where slower and heavier riffs owe a debt to early Soundgarden and high octane moments tap futher into a mangled, Jesus Lizard-esque fury. The highlights from this brutal workout often come from Brown’s drumming as opposed to the guitar work; he adopts an almost free jazz style when clattering through some high tempo moments, but also shows a brilliantly rhythmic ability at other times, supplying a really interesting backdrop for Morris’s escalating anger. He’s also in the driving seat during ‘Smoking Gun’ when a chunky rhythm is necessary to underscore deep, descending riffs and snare drums clatter against a few hardcore bursts that call back to earlier OFF! without ever feeling like direct recycling. It’s actually during a few of these even more experimental, noisier offerings that ‘Free LSD’ feels like the kind of record that has a lot to give. By further distancing itself from the Black Flag/Circle Jerks hardcore of the early releases, it’s much easier to understand – and actually appreciate – this “new” band for what it is. Never an easy listen, but in capturing a quartet actively cutting loose, these drum-centric, more abrasive numbers are far more interesting.

Changing the mood yet again, ‘Black Widow Group’ opens with a thick and almost darkly psychedelic riff – sort of like a Thirteenth Floor Elevators reworked by Burning Brides – and it’s another musical hybrid that really teases the listener by giving no clue as to what will follow. It certainly sounds nothing like the OFF! you’ve come to expect, but when Morris steps up to vent and various older punk tropes explode within a sharp edged riff, it sounds very much like an updating of the debut’s sound. Completely away from a typical OFF! approach, ‘Murder Corporation’ features Morris sneering over a punk/metal hybrid that works around a head-nodder of a riff – very much of Coates’s making – and sounding like a weird tribute to ‘Zodiac’ era Melvins. Is it what most people would want? No. Is it cool in its own right? Very much so, enough to try something similar on‘Suck The Bones Dry’, where a Melvins-ish heart pumps a great riff against a spite infused vocal performance that’s easily the record’s best. Even though there’s a lolloping heavy groove that never decides whether it can commit to hardcore punk, heavy garage or strange mangled stoner, it appears more focused than at least half of the material here… Listeners with more experimental tastes will find a lot to love in these heavier numbers, and repeated listens certainly place them among ‘Free LSD’s stronger tracks – but whether that’s enough to recommend this album is a different matter entirely.

The title track captures the many moods of this shapeshifting noisefest in a single burst when Brown kicks everything off by steering an industrial tinged riff through a speedy opening whilst Coates layers everything with a shrill and discordant extra layer. The verses occasionally want to drop into classic hardcore but never quite get there, instead adopting a non-committal hardcore and metal hybrid which, despite capturing a great guitar tone, never actually gives the average OFF! fan what they truly want. Morris moves listlessly between pure anger and seething discontent as he rants about “scientific worst achievements” before latching onto an expletive driven refrain that really doesn’t have the pure vitriol that OFF! once tossed out with such a natural ability. In so many ways, this telegraphs this album’s most annoying/flawed elements in a handy soundbite. A couple of listens doesn’t improve anything, sadly, but thankfully there is a little more gold to be mined elsewhere.

Those looking for more obvious hardcore might find consolation during numbers like ‘Behind The Shifts’ and ‘Circuitry’s God’ when Coates throws out speed driven riffs that convey a much stronger links with punk, while Morris – higher in the mix than on some tracks – sounds almost exactly like his younger self. As with the bulk of this record, a much denser, more rock-oriented production job stops these numbers from merely being post-Black Flag hardcore by numbers, but with the band attacking at full pelt and Keith sounding on the cusp of rabid, they’re a hugely welcome reminder that the old OFF! are still simmering – seething – below the surface of this album.

Released at a time when the whole world seemed to be going to absolute shit – with mounting tensions in Europe, an increasingly insular Tory government driving the UK ever further into the ground, and the US suffering from multiple shootings on a daily basis – Morris’s anger is not only justified, but wholly welcome. However, ‘Free LSD’ is often frustrating: all of the things that previously made OFF! great are diluted; the energy is offset, sometimes to the point of being completely derailed, when the assembled musicians insist on experimenting with slower instrumental openings and a sound that fails to latch onto any specific genre. However, all bands should progress – especially when only recording so sporadically – and time allows for a record that’s sometimes more interesting, even if it doesn’t actually work as a whole. It’s certainly likely to divide opinion, but at least Morris remains somewhat constant in his abilities to offer an absolutely incendiary vocal. The combination of Keith’s sneer and Dimitri’s riffs will always be enough to make any OFF! album powerful in its own right, but this needs more patience and time than anything previously baring that name. Those willing to keep a more open mind might be able to slowly uncover a raw but textured work that’s far richer – and more important – than any safe or nostalgia driven hardcore record, but on the whole, ‘Free LSD’ is a challenging and sometimes even messy release that won’t please everyone.