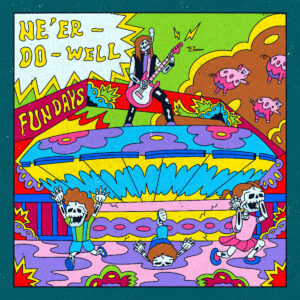 The comparisons with Fall Out Boy hit the listener pretty much straight out when, during ‘Compromise’, Rolli delivers the hugest of emo influenced vocals, very much in the vein of Patrick Stump and Panic At The Disco’s Brendan Urie. With that set against a multi-tracked guitar part and huge drum sound, any comparisons to either band continue to be justified, but within Rolli’s own songwriting, a new voice comes through as he muses upon wanting more from life. Musically, too, there are a couple of nice flourishes to lift the number from being merely pure homage. A very 80s lead guitar coming through in waves during the bridge sections lends a great retro slant, and a slightly heavier chug in the middle eight hints at more metallic things on the horizon. The influences may be as subtle as a mallet most of the time, but it’s a superb track to kick off a great release.

In a massive change of style, ‘Feel No Pain’ brazenly borrows riffs from Motley Crue’s ‘Too Fast For Love’ and twists them into something a little more energised with more of a rock ‘n’ roll undertone and a heavy drum stomp. Coupled with a scratchy, glam tinged vocal, the jagged party rock that unfolds could easily be that of a different artist in comparison to the opening track, but it’s no less impressive. Once again, Rolli flaunts an easy knack for a massive hook, and when it comes to filling space with a few lead guitar licks, his magpie style pilfering from G N’R’s ‘Appetite For Destruction’ shows the kind of cockiness that’ll take this project to glory. As before, between the obvious influences, there are some great vocals and even greater musical hooks, and fans of the style should glean plenty of enjoyment from Bryan reaching for some huge leather-trousered notes in the vocal department, and from the crashing riffs that fill an anthemic chorus. ‘The Truth’ takes a sidestep to add a few bubblegum-esque riffs to the established glam, emo and hard rock sounds, and in doing so flaunts a couple of melodies that threaten to slide into ‘I Fought The Law’. It’s a case of being all ringing lead guitars and bravado, before dropping into a glam-popish world of muted chords and curling vocals, but everything sounds cool. Despite the core of the track being more sedate, there’s still a real punch, and those Fall Out Boy vocals make a welcome return to show how naturally Bryan steers his way through a bombastic melody that really soars.

With ‘I’m Not Getting Any Younger’ melding the emo traits with the kind of big chorus that Billie Joe Armstrong might have wheeled out during the making of ‘21st Century Breakdown’, Ne’er Do Well’s grand approach to pop punk is very assured, but a little less distinctive, but even here – at the least remarkable end of his oeuvre – there’s some entertainment value, and any perceived weakness is quickly balanced out by the superbly crashy ‘Wasteland’, a speed driven post-glam hard rocker that sounds like an old Beautiful Creatures throwback with its driving riffs, clattering rhythms and semi-helium vocals. In terms of capturing Rolli with all guns blazing, it doesn’t get much better than this, especially when the “piss and vinegar” referenced in the opening number seemingly boils over and shredding 80s guitar parts challenge a forceful lyric and confident voice for dominance.

As suggested by its title, ‘Fun Days’ aims to provide some massive thrills, often in an old school way. It shouldn’t be disregarded as cheap party rock, though. Between Rolli’s easy gifts for tightly wound arrangements and lyrics that somehow manage to waver between anthemic and introspective, it’s much smarter than that. This is a release that really deserves to put the multi-talented musician on the map. A highly recommended listen.