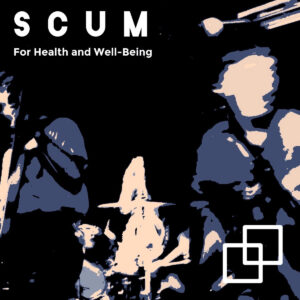 Since, tonally, there’s a throwback to Mark E. Smith’s ‘Post Nearly Man’ – an incoherent, rambling collection where the Fall legend seeks to confound his fans as much as entertain them – the subsequent selection of post-punk noises that emerges should’ve been obvious in so many ways. Despite drawing from some superb late 70s and early 80s influences, though, some of the music on ‘For Health And Well-Being’ seems generic and rather uninspired on first listen. However, it’s the kind of EP where time spent actually uncovers some great moments lurking beneath the noise.

‘Abuserism’ is dominated by a shrill guitar sound and angular riff that sounds like a band practising bits from Gang of Four, but Scum seldom add anything to make that sound any more original. There are times when repetitious nature of the music – or perhaps the thin production sound – owes a little more to ‘Slates’ era Fall, and it’s fair to say that drummer Ben Parker can pack a punch. Unfortunately, since the arrangement descends into wanton repetition after about a minute and never really recovers, it sells the listener a little short. In addition, a few lyrical barbs attacking consumerism pique interest but never seem to genuinely follow through with anything particularly memorable. There’s a glimmer of older British bands like UK Subs within a few of the faster riffs, which is very much a plus, but nothing much resembling a decent hook, which leaves behind a track that feels unfocused. Following a burst of feedback and a little thrashing about, ‘Vanity Support’ fills thirty seconds with a slight variant on the same riff. It’s so slight that it’s actually hard to spot that it’s supposedly a different track, unless you’re giving it your full attention.

Between those numbers, it’s hardly the greatest first impression but, in something of a swift upturn, ‘Hard’ comes with a much fuller sound. The bass is now far more audible; Ezra Glennon wields a fat bottom end that’s complimentary to his intensive shouting throughout this track, and the main riff comes with some massive boots, figuratively speaking. The slow chug of the post punk riff that’s quickly set in place – sounding like Minor Threat tackling one of the brutalist experiments from the second half of Black Flag’s ‘My War’, or like ‘Chairs Missing’ era Wire played back at half speed – certainly captures this young band in a position of strength. It’s just as well, since Ezra shouting the title over and over until he sounds as if he’ll do himself damage doesn’t really work as a hook in the long term. Last up, ‘Intravenous Inconvenience’ presents the EP’s finest marriage of riffs and message. With guitarist Spike Elwell throwing out hard guitar lines at breakneck speed, this number sounds like the earliest Arctic Monkeys colliding with the pure punk of Bad Nerves and, as such, shows Scum off rather brilliantly. The lyrics are a pointed attack on anti-vaxxers – most of which sound like an angst fuelled spat on a northern housing estate set to music – but by setting the pure anger to the EP’s most complex arrangement, the delicate balance between intricacy and fury makes it more exciting. Those able to hear past the anger will discovers some brilliant percussion fills and a dancing bassline that occasionally drops a few funky refrains into some unexpected stops, all of which advertises a band who are capable of much more than those first impressions suggest.

This is definitely a curate’s egg of a release, in that it places a few great riffs against some rather undercooked chorus writing, That said, these three lads from Leeds can obviously play, and the spiky ‘Intravenous Inconvenience’ conveys a band capable of both energy and heft, while  bits of ‘Hard’ show a deep love of post punk that, in time, could result in something with some very sharp edges. This isn’t perfect, but it shows that Scum clearly have some great potential.