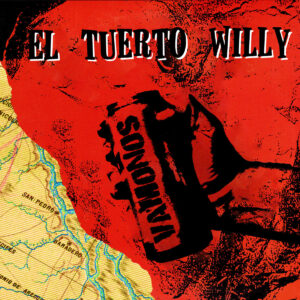 Argentinian punks El Tuerto Willy are no strangers to a cover tune or two. On their earlier releases, they can be heard hammering through tunes by NOFX, Rancid, Sublime and Elton John (often in Spanish), but in terms of all round entertainment value, their 2021 digital EP ‘Vamonos!’ tops the lot.

Bringing together three Rancid tunes replayed at speed, the EP is a great showcase for the musicians. Throughout the recording of ‘Radio’ – easily the finest El Tuerto Willy offering so far – bassist Seba rattles his four strings with a force and at a pace that’s easily comparable to Matt Freeman (no easy feat) while the twin guitars from Daniel and Juli stoke up some serious punky riffs. The choice to play it in the Rancid arrangement – all guts and Clash-like anger – as opposed to reworking NOFX’s reggae arrangement is very much a natural choice, and Daniel’s voice conveys a brilliant, sneering attitude. Where this band makes it their own, though, is in very much in the lyrical department: it’s really interesting to hear something so many punk fans know inside out partly reworked in Spanish. What’s more, despite being translated, the meter still scans well. Although very much a DIY recording, there’s just enough sheen here, too, to make it sound every bit as good as many of those more overlooked punkers you discovered via label samplers back in the 90s. For fans of the original cut, this is not to be missed.

A much more trebly take on Ruby Soho doesn’t seem quite as sharp at first due to some particularly shrill rhythm guitar sounds but, again, there’s actually plenty that would attract the ears of even the most casual Rancid fan. As before, the bass takes a lot of the weight, but the best feature is provided by a brave change of mood when the band have a decent stab at harmonies and attempt to shift the melody towards something more tuneful. It’s certainly a more than commendable change; getting to hear one of punk’s most brilliant chorus hooks taken beyond Tim Armstrong’s beloved UK punk influenced shouting and into a more power pop, melody conscious sphere really allows its catchy melody to live far beyond its original means as a crowd shout-along. When the band put on their ska shoes for a sharp take on ‘Time Bomb’, it more than proves that an English lyric is far from essential when serving up good times. Another great fit for the band, the Spanish translation of the lyric sits really well against a bouncing rhythm where a dual vocal and a fat bass groove more than compensate for a thin drum sound. Even if you’d never heard the original version of this number before, there’s plenty here that still showcases a great song.

Short as it may be, ‘Vamonos!’ brings plenty of entertainment value for punk fans. If you love Rancid, it’s certainly worth ten minutes of your time; if you enjoy a decent punk cover, it should offer almost as many high energy thrills.

Grab a free download via the Bandcamp widget below.