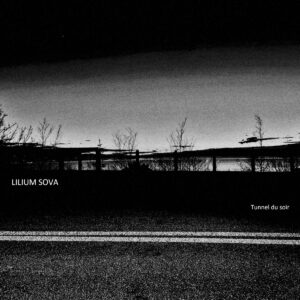 Their 2022 EP ‘Tunnel Du Soir’ gives listeners – and potential new fans – another genuine treat. Its use of times in place of traditional track titles makes the three track affair feel like a companion to their 2012 release ‘Epic Morning’ – and in many ways it is. The earlier album took the listener from 1AM through to 8AM. Here, we are supplied with an evening soundtrack that’s full of the usual twists, doglegs, bloody enormous riffs and occasional red herrings, but – as usual – it’s abrasive and sometimes confrontational style makes it anything but an easy journey.

‘5.30 PM’ opens with a disquieting drone, a clang of piano chords and a buzzing sound that suggests a weird musical disconnect. As the sparse melody grows, the piano – echoing, somewhere near the back of the mix – appears to recall elements of Craig Armstrong and Thomas Newman film scores which, obviously, paints the band in a very different light to the bulk of their work. Introducing a slow bass and some heavily reverbed guitar, the arrangement sounds like the backdrop for a modern noir, and in taking a strangely traditional approach for Lilium Sova, the music unfolds slowly, as if modelled on a classic Pink Floyd piece, swirling with an ambient heart, promising to explode into something even greater. …And then it simply fades, leaving everyone hanging, wanting more…

‘6.40 PM’ will certainly feel far more familiar in the way it chooses to kick off with a massive riff. Its sludgy chords, repeating the same notes over, takes post metal sounds to their most extreme. The guitars more than suggest a love for doom metal, but beneath the monolithic noise – as always – there’s so much more at stake. As the rhythm takes an oppressively slow journey across fifteen minutes, the doom is contrasted by a world of atonal brass, as if taken from one of Archie Shepp’s sixties recordings, whilst grinding lead guitars throw out atonal shapes worthy of Melvins at their most obtuse. Shifting into a new rhythm somewhere around the two and a half minute mark, repetitious chopping sounds suggest an industrial core, before everything falls away for a lengthy passage where a bass and bell like noises wander through a stoner/deep psych trope. Always ominous, yet strangely beautiful, this quiet interlude shows how Lilium’s most unpredictable side will sometimes win through for the better. Eventually using that for a platform where hard bass chords underscore a grinding sound, things show how the sublime can turn ugly in a heartbeat, proving that, even after years of experimenting, this band is anything but predictable. The track’s second half kicks off in a way that’s a little more challenging, since the core melody is perhaps too repetitive. The same chords lurch, over and over, whilst angular and distorted guitar shapes dance in their role as melodic lead. It’s a hard going few minutes, definitely, but – luckily – the climax yields some of the EP’s finest music when a heavy grinding bass worthy of the likes of Acid King drives a slow groove, allowing hard brass and angular guitar sounds to present a weird concoction of post metal, avant-jazz and even a touch of world music. It sounds like the culmination of all of the best Lilium Sova ideas to date.

Last up, the eight minute ‘9.50 PM’ goes nowhere quickly. It first introduces a lengthy drone and a clanking sound that conveys the idea of roadworks outside of a bedroom window, and slowly, the drones expand. There are noises that sound like metal doors being dragged, and other interjections that sound like lifts from horror scores. Gradually, the noises intensify, with elements of guitar feedback used to drop in extra scraping sounds and a deep bass is employed to build upon the growing unease. Those willing to crane their ears beyond the sheet of noise might actually enjoy hearing the bass slowly changing pitch, but it’s best not to expect any actual music here. By four minutes in, the feedback howls like a siren calling time at an old fashioned factory and the noise gradually subsides into a disquieting silence. It’s interesting that for a piece without any discernable melodies or anything repeated, the seven minutes never seems to drag – if anything, it plays like an industrial take on something from the Billy Yfantis catalogue. It shouldn’t be unexpected, especially as Lilium Sova have experimented with drone before, but they’ve rarely done so in such an extreme fashion.

Despite only featuring three tracks, there’s plenty about ‘Tunnel Du Soir’ that gets to the heart of Lilium Sova’s noisy yet arty sound. Although dominated by lengthier works, ‘6:40 PM’ still plays like a collection of shorter ideas, but for those willing to invest the time, it’s definitely home to several bits and pieces that very much add to the band’s legacy of underground noise. This release won’t be for everyone, but those looking for something abrasive, challenging and even a little avant garde certainly won’t feel short changed. In a world where so much post metal seems content just to recycle bits of Isis, Russian Circles and Godspeed, there’s a twisted pleasure to be had from being overstimulated by a band still willing to push the envelope way beyond the obviously melodic.