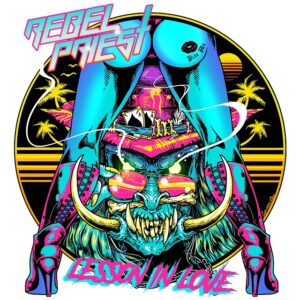 Canadian rockers Rebel Priest made their first breakthrough in 2015 with a self titled album that introduced listeners to their world of sleazy riffs, combining elements of old school metal, bluesy rock and no-nonsense grubbiness. The following years saw the band sharing stages with Lordi and Diamond Head, and their work likened to AC/DC, Guns N’ Roses and Motley Crue, despite not always sounding too obviously like some of those legendary acts.

Their 2022 release ‘Lesson In Love’ continues their unashamed voyage through a world of dirty riffs, sleazy lyrics and – as you might suspect from a release with an arse on the cover, painted blue or otherwise – old fashioned rock ‘n’ roll attitudes. For those who loved them previously, the short four song assault will bring plenty to love; for those not enamoured with the retro rock sound and attitude, obviously, the chances of being won over are slim to none.

Nevertheless, regardless of whichever side of the fence you find yourself, few would deny this band’s mastery of a riff and a need for speed has held firm. Sneering in the face of fashion, the title track opens with a dual guitar riff that sounds like a pure homage to ‘Wheels of Steels’ era Saxon, which coupled with a gruff vocal and grumbling bass, sets up a solid old metal/biker rock blend that showcases the musicians very effectively. A heavier groove dropping into a shout-along chorus promises even bigger things but is all too quickly swept away by a full compliment of gang vocals, and although the main hook itself relies too much on the repetition of the title, the enthusiasm in which the band approach the job in hand is impressive. In terms of a musical highlight, the performance is very much lifted by a fretboard melting solo courtesy of Benny Kemp – a lead break very much showing a huge love for the NWOBHM – before a more melodic lead with multi-layed riffs injects an important musical flourish. Despite seeming a bit shouty and too repetitive at first, as it turns out, there’s a solid hook here. It finally proves rather catchy during the number’s closing moments, thanks to rowdy coda that really hammers home the vocal refrain with a sledgehammer. In terms of taking a simple idea to the masses in the most fuss free way, it cannot be disputed that Rebel Priest totally know what they’re doing…

A much stronger arrangement sits at the heart of ‘Divebomber’ and this is evident right from the opening notes where a 70s hard rock crunch is tempered by a massive, almost bluesy lead. Using this to slowly crank the gears, Rebel Priest are then ready to go head first and hell for leather into a brilliant metal infused rock ‘n’ roll banger that sounds like early Rose Tattoo on steroids. The core riff mixes the best of The Tatts’ and AC/DC’s unshakable Aussie rock (circa 1978), and the vocals augment the high octane groove with a slightly screechy, yet still really gruff performance from Jayme Black that values force over finesse. For fans of the style it’ll almost be an instant love, especially with the way Black’s accompanying bass growls relentlessly beneath the bombast. At the point the track reaches a natural end, the band takes a full second’s breather, and drummer Nate Pole kicks everything back in with a double bass flurry that’s an obvious hat-tip to Motorhead’s classic ‘Overkill’ in a way that certainly raises a smile. Crashing through the last bars with full bluster, the band inject an already busy arrangement with a driving rhythm, a last round of a call and response chorus and a slow descent into distortion…and in true ‘Overkill’ style, the process repeats yet again. The influences may be obvious and the style somewhat out of time, but it would honestly take a hard heart not to love this.

‘Coat Check Girl’ opts for a little more of a shouty punk attitude, which coupled with lyrics about drinking and a metal edged guitar, has a hint of Gang Green. Whilst the sharper sounding guitar work remains impressive, the gang vocals and obsession with drinking and pulling err on the side of tedious. With a half decent solo buried under bluster and the lads constantly shouting about the girl with the “black hair, red lips” taking the lead, this will certainly feel a little tiresome for any listeners who value melody and something a little more thoughtful. It makes three minutes feel like a lifetime but, luckily, the short and sharp ‘Bonfire’ is on hand to redress some balance. The shouty lyric, again, places the emphasis on Rebel Priest’s interests in reckless fun, but the music brings some tight NWOBHM elements into play once more, with drummer Nate filling spaces with the kind of massive fills worthy of the legendary Thunderstick, and the guitar riffs attack with more than a trace of Diamond Head and Angelwitch. More a collection of riffs than a song, the shouty vocals are sometimes intrusive, but in terms of presenting themselves with a genuine force, the band seem more than solid yet again.

Okay, so, this isn’t perfect, but then it’s likely that even Rebel Priest know that. They aren’t about intricacy or flashiness, and aren’t out to change the world with thoughtful or (socio-)political messages. This EP’s emphasis is purely on fun, and when these Canadian lads get it right – as they very much do with ‘Divebomber’ – their world of rock ‘n’ roll trashiness presents something with a really brash but strong appeal. If you’re able to turn your brains off for fifteen minutes and value volume and verve over rumination and reflection, chances are you’ll have the good time that Rebel Priest have very much intended.