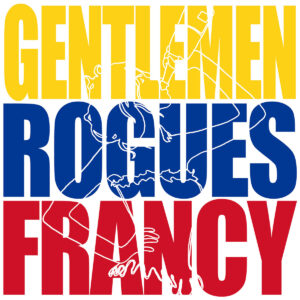 As a particularly troubled 2020 began to draw to a close, US retro rockers Gentlemen Rogues released ‘Do The Resurrection!’, a brilliant single that blended various 90s rock influences with a few Thin Lizzy-esque guitar parts, creating an almost timeless number that was massive on both riffs and hooks. Having reeled in various listeners, its flip side was arguably even better. By mixing elements of Lemonheads, Superdrag and My Bloody Valentine tracks, ‘Bloody Rudderless In Ursa Major’ raised the bar in terms of how to construct a brilliant and inventive medley. It was definitely the kind of release that left listeners wanting more…but the band appeared to go into hiding, and 2021 came and went without even a whisper from the Rogues’ camp.

Their long overdue follow up follows the same structure as before, in coupling a self-penned number with something familiar which, again, results in a short, sharp listen that advertises the band’s sure fire talents without the need for filler. The original ‘Francy’ accentuates the band’s punkier instincts via a massive riff that grabs the old Minneapolis sound by the scruff of its neck and delivers something in the vein of Soul Asylum circa ‘Made To Be Broken’ crossed with the more melodic parts of Grant Hart’s solo work. The way a howling lead is placed over the jagged rhythm stresses the Rogues’ previously effortless style, and as a broader melody creeps in for the verse, the blend between the punky and 90s alternative influences is seamless. Adding a slightly gruff lead vocal, it further becomes like an old Soul Asylum/Buffalo Tom tune you’ve always known, and although the chorus could’ve been bigger, there’s more than enough here that’ll please extant fans after that all important second or third play.

Staying with the same format as before, the new track has been coupled with a cover tune, and this time around the band opts for a singular number, but from an unlikely source. In taking They Might Be Giants’ ‘I’ve Got A Match’ (originally from the two Johns’ ‘Lincoln’ LP) and stoking up the ringing guitars and a little of the pace, Gentlemen Rogues are able to make the track their own. The original recording’s tango rhythm is gone – that probably didn’t make as much sense without the accordion – but the hooky melodies stand firm. Coupling a wall of guitars with strong harmony vocals throughout, it actually sounds like something from deep within the Rogues’ own catalogue and it’s great to hear this old pop banger with bigger boots, and even a brief hard rock guitar break. If nothing else, it shows that beneath their wanton quirks that TMBG are actually terrific song writers. There’s always a hope that the inclusion of a well chosen cover would provide an interesting or easy entry point for a new listener, but since They Might Be Giants tend to polarise opinion, that probably isn’t the thinking here. Whatever the Rogues’ motivation for covering this, though, they’ve done a first rate job.

Like the two tracks issued on the ‘Do The Resurrection!’ EP, these recordings will very much increase audience appetites for even more Gentlemen Rogues material. Absolutely loaded with great riffs and the kind of retro familiarity that takes a very 90s sound to the next level, these songs provide yet another reason to love this band and to wonder why they aren’t so much better known. A highly recommended download.