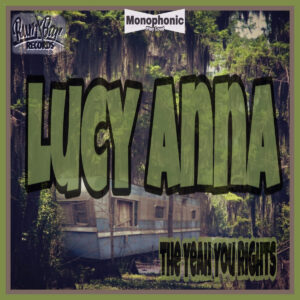 If you took the distorted hard rock of Blue Cheer, the garage rock noise of the Fucktons and applied a country drawl in the vocal department, chances are you’d end up with something that sounds a bit like The Yeah You Rights. On their 2019 release ‘Lucy Anna’ this Louisiana duo mix things up with regards to a retro noise, and while the results don’t always lead to the easiest of listens, more than half the time, their sense of drive makes up for any melodic shortcomings.

The real highlight comes from an unexpected cover. You could live until you were one hundred years old and experience a thousand covers of the Ray Charles classic ‘What’d I Say’ and you’d never hear anything quite like the version from this EP. At the outset, the duo tap into a heavy Duane Eddy twang and then speed that up in a way that provokes a sense of being stuck in an action TV show from the fifties. Ex-M80s/Tough Choices guitarist Gary Truman really rips it up on the supercharged riff, even playing in a way that hints at garage rock blending with a surf rock sensibility. All the while, drummer Mark Pavlack smashes the merry hell out of his kit. It’s not immediately obvious where things are going. To be fair, to begin with, it’s not even obvious that they’re covering the world famous Ray Charles number, such is their keenness on speed and noise. It’s only when the vocal appears and a few familiar lyrics emerge that things settle in, but even then, any idea of “settling in” is purely relative, since the heavily distorted, Southern accented vocal approaches the performance with a sense of force that’s far more in tune with the MC5…or perhaps even some garage rock that’s even more violent. Whatever, it’s furious and it’s fun. It’s reason enough to check out this release, which is probably a good thing since the rest of the material is definitely of the hit ‘n’ miss variety.

Also great, ‘How About Now’ rattles along with some fantastic garage rock guitars augmented by a huge, unfiltered – unproduced – drum sound. The groove is old fashioned; the use of a stop leading into a simple, shout-along chorus is hugely effective. In fact, the general vibe is strong, resulting in some mean garage rock. This is the sound of The Yeah You Rights in their most natural environment. Trading in the trashy for the bluesy, the title cut has plenty of swagger and initially sounds like it’ll be just as good, but with three minutes passing without too much of diversion, it wears thin a little too quickly. A massive chorus hook might have made up for that, but with too much of a drawling approach and not so much energy in the performance, it seems it is no real match for ‘How About Now’. It’s only with the track’s coda things drastically improve when the swamp blues gets cast aside for a speedy garage rock romp where Pavlock hits upon a superb groove. By then, though, it feels like a missed opportunity.

A bit of an oddity, ‘I Gotta Right’ fades in mid performance, but doesn’t skimp on presenting the band’s rawest elements. The riffs come fast, blending hard country and punk sounds to achieve something truly raucous, while a drawling voice sounds like something dragged from the swamps of the deep south. With a few more jagged riffs thrown squarely at the listener, the recording then stops as if the tape has run out. Forty five seconds of pure bluster, the track plays very much like an audio sample, as played through cheap speakers back in the days of dial-up internet; it’s hard to say why it’s on the EP at all…and yet the brief excitement it brings sums up the Yeah You Rights in a heartbeat. Almost as if to make up for this fragment, the EP closes with an eieven minute epic. Since, in the main, the band prefer the gutsy in-and-out approach of a two minute garage rock belter, initially it’s hard to fathom how they’ll make it through something that makes up half the total running time, and yet ‘Unvulgar’ takes on such a seemingly impossible task. Kicking off with a similar styled riff to the title cut, the guitars begin in a loud and sloppy manner. It’s a trait they’ll cling on to for the duration, but by diverting from the main riff after a couple of minutes to indulge in a howling lead break provides a reasonable shift, but it’s when diving deeper into a fuzzy proto metal sound to reinforce their love of noise that this lengthy number really gains momentum. By the eight minute mark, via an ascending scale and a distorted lead break that’s bigger than the previous, The Yeah You Rights seem to find their true calling – and their brand of rock falls somewhere between Blue Cheer, Amboy Dukes, Television and a really distorted garage punk band with a dozen fans. It’s not always easy listening and perhaps its best bits could have been excised for the core of two shorter numbers, but you kind of have to admire the sense of chutzpah.

Make no mistake, this EP is ugly. The vocals are occasionally pretty bad and the playing is sometimes on the questionable side of raw. That said, when The Yeah You Rights get it right – as they do on at least two occasions – their gruff approach, combined with sheer balls and absolute determination, results in some furious garage rock, presented in an unapologetic monaural source. Truman’s voice is always going to be a difficult sell, but if you like the rawest garage rock and blues, this is still worth investigating. You owe it to yourselves to hear the Ray Charles number, if nothing else…