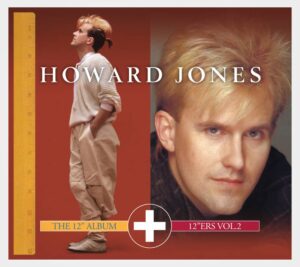 Following that release, this two disc set of remixes seems a little modest, but is almost as important in its own way. The first disc provides a timely reissue of ‘The 12” Album’ – a release once omnipresent on the cassette shelf of any decent record shop – and the second gives a long overdue UK debut to its largely unknown successor. Between them, they create a relatively full picture of HoJo’s extra curricular vinyl fillers during the 80s.

You’d be hard pressed to find anything more 80s than the contents of the first disc (save, perhaps, for the artwork of Duran Duran’s ‘Seven & The Ragged Tiger’ LP, which shows all the signs of the era’s…excesses), but for fans, the well circulated material will provide a great a great nostalgic pull. All six selections are newly remastered, and although the tracks themselves aren’t new, they retain a certain sparkle. Extended versions of ‘What Is Love?’ and ‘Pearl In The Shell’ typify some of the era’s more basic 12” recordings in that they merely extend upon the single/album versions with some extra instrumental breaks, and in the case of the former, a reliance on overlaying vocals during the main hook. This creates something enjoyable if you’ve always loved the tracks in their basic form, but they aren’t particularly inventive.

The original ‘12” Album’ comes into its own with a pair of tracks that have seemingly been rebuilt from the ground up. The ‘International Mix’ of ‘Like To Get To Know You Well’ is meatier, and fuller sounding, drawing a bigger focus on the synth bass. This gives the impression of a much bigger sound that pulses beyond the original’s steel drums, which in some ways would have made it a worthy mix. However, HoJo goes the extra mile, introducing mechanised rhythms during stripped down interludes, moments where huge crashing drums pierce through the colder mechanics, and even dropping in verses translated into French and German. During the track’s second half, there’s even a trace of hard funk. Although some of this may waver towards 80s indulgence once more, there’s plenty that would have made the 12” release exciting at the time – and it still works brilliantly. The ‘New Version’ of ‘New Song’ also remains rather lovely, being a little richer than its original 1983 counterpart. A vocal led intro and various drum machine elements that sound slightly more modern (relatively speaking) lead the way, but it’s during the second half of the number, in particular, where the “new” really comes into play, with a piano-led instrumental break that very much looks forward to smoother, later albums like the wonderful ‘In The Running’. If you’ve somehow never heard this, it’s worth the price of admission for this 2CD set.

‘Total Conditioning’ is a vastly expanded take of ‘Conditioning’ where the heavily robotic feel of the ‘Human’s Lib’ album cut is allowed to work itself over a full seven minutes. This effectively becomes a synth pop powerhouse where multi-layered vocals dance above the colder sounds, before Howard shifts the key and drops some very Krafwerk influenced elements into the main groove, against rising noise that sounds as if it were inspired by a sci-fi cartoon. It might be geared more towards the bigger fan, but in terms of huge synth pop adventures, it’s very well constructed. Rounding out the original release, the non-album ‘Always Asking Questions’ (a track premiered as part of Howard’s 1983 BBC Session for Kid Jensen) is terrific pop that immediately shows growth from the ‘Human’s Lib’ material thanks to a blanket of keys underscoring the typical mechanics with a broader melody during the verse. Even better, the chorus is unafraid to pitch great multi-layered harmonies against a crashing beat, and although it isn’t quite on a par with the slightly later ‘Things Can Only Get Better’, its inclusion here alongside the genuine 12” mixes and other reworked stuff is certainly welcome. [The version included here later appeared on ‘The Best of Howard Jones’]

For most people, the second disc will provide every reason to purchase this collection. ‘12”ers Vol. 2’ has never been released officially outside of Japan and South Korea. With many Japanese imports being both expensive and limited, they’ve often been hard to come by. This domestic release will fill an important gap in most people’s collections, and even if the material isn’t quite as sharp, the lion’s share of the extended mixes and alternate cuts work very well. Looked at on the most basic level, the best mixes demonstrate how the ‘Dream Into Action’ material was both as strong and malleable as it’s predecessor’s best tunes.

The extended mix of ‘Things Can Only Get Better’ finds time to squeeze out a longer instrumental section, peppered by a few vocal effects and blanket keys that sound as if they’ve been lifted from a Tangerine Dream soundtrack. In terms of extending the album cut effectively it does a fine job, especially in that it doesn’t feel jarring in any way. A different, instrumental take on the track, ‘You Jazzy Nork!’ accentuates its slap bass sounds and strong rhythms, occasionally lapsing into something that sounds like a pop-ish forerunner to the European house movement. It manages to be different enough without losing its melodic structure, which is an essential reason why it still works. Since it was missing from the three disc reissue of ‘Dream Into Action’ and only available on the strictly limited and very expensive box set reissue in 2018, this could be the first time some people get to hear this great recording.

Veering close to filler, ‘Life In A Day (Part Two)’ takes the musical refrain of the single cut and fills a a full seven minutes by stripping it down to its instrumental base whilst being accosted by various clanking rhythms. Howard comes in for a chorus vocal about five minutes in, reminds everyone of what they’ve been listening to and slunks off again, before a fake guitar sound noodles into the coda. In terms of 12” material, this sums up the worst from the 80s, but luckily, a 12” mix of ‘Look Mama’ sets everything back on track, firmly showing its pop charms in an uncluttered fashion. In choosing instead to make a bigger feature of a vocal during the first half and a heavy, synthesized guitar solo during the second, it is a very confident extended cut that never loses sight of the original single’s accessible nature. Shiny, sharp and focused, it’s almost everything a 12” mix should be.

Rather than purely extend the material, the 12” mix of ‘Bounce Right Back’ utilises a different rhythm track where the “snare drums” are much larger and carry a brilliant 80s echo. In terms of musical reference points, this mix makes one of ‘Dream’s less essential cuts take on the grandeur of Pet Shop Boys’ brilliant ‘Introspective’ album, immediately presenting a musical improvement. Obviously, nothing will make Howard’s faux rap vocal any better – that’s something that just needs to be chalked up as a good idea at the time – but musically, it’s superb. An extended mix of ‘Hide & Seek’ makes a bigger feature of its understated intro, slowly fading in the washes of keyboards and flute like sounds as if inspired by mid 80s Dire Straits. For the impatient, the lengthy two minute intro could go nowhere fast, but there’s a lot within its film score inspired beauty that shows how Jones’s best music from this time retained a lyrical romanticism, despite being purely synth based. Already a great ballad, this longer take merely allows the listener a bigger canvas in which to lose themselves, and in the most welcome way.

In terms of fairly basic reissues, this is brilliant. It sort of goes without saying, though, that as brilliant as it is, it probably won’t have as much charm for the casual buyer, or anyone who hasn’t owned the original ‘12” Album’ previously. For those who’ve long treasured their well worn vinyl of that release, or have clung onto a long redundant cassette copy but somehow still haven’t picked up a CD, this offers a very important upgrade. It almost feels like the musical equivalent of an old favourite jumper – albeit one that might be a size too big. When approached in the right frame of mind, it’s almost impossible to resist such a strong nostalgic pull.