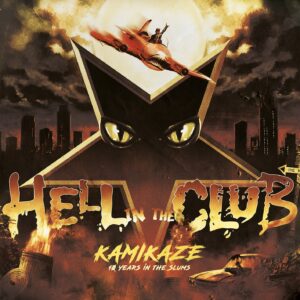 Their 2022 release ‘Kamikaze (10 Years In The Slums)’ brings together two new songs, a reworked original and a couple of well known covers. Released to celebrate ten years of Hell In The Club, it may seem to be a stop-gap, but it displays just as much energy and brilliance as a fully fledged brand new release, and the inclusion of an Alice Cooper cover is definitely an effective way to pull in a few people who may well have missed the band previously.

‘Kamikaze’ opens with a brilliant, almost circular riff played atop a great 80s rhythm, immediately reminding the listener of HITC’s very 80s approach. Moving into the verse, the chunky riffs take on the air of a European hard rock band reworking something from the Ratt catalogue circa ‘Dancin’ Undercover’, while vocalist Dave taps into a huge, semi-curly vocal. By the time the first chorus ushers in a rousing gang vocal and a few of the riffs hint at more AOR-ish intents, it becomes a very well-rounded example of the band’s shamelessly retro approach. There’s nothing flashy here, just tight harmonies, a finely tuned glam/melodic rock groove and a short lead guitar break, but in paying homage to the glory days of big haired rock, it does a perfect job. ‘10 Years In The Slums’ taps into HITC’s harder side, with drummer Mark leading the charge with a thundering riff, and guitarist Picco making the very most of a multi tracked sound and dropping a few thrash tinged chugs between the rousing melodic metal core. Taking the faster pace in his stride, Dave offers a very confident vocal that makes the best of his full range, moving between hushed moods (most obviously during a strange interlude) to full on wails, with the latter filling another rousing hook. Those elements would be enough to make this classic Hell, but Picco’s featured solo could easily be one of his greatest to date. Across several bars, he bends and manipulates his strings in a bizarre fashion, creating noises that sound like Pole Position’s Lasse “Lars” Boquist attempting something from the Tom Morello catalogue, leaving behind a few musical phrases that lift Hell In The Club far above your average hair metal act.

Revisiting the past, a reworked ‘In Your Eyes’ brings a hard to find curio to a much wider audience. The original ‘In Your Eyes’ (included on the Japanese edition of the 2012 debut album) was a fairly typical acoustic rock ballad, in so much that you could hear the obvious influence drawn from similar Skid Row and White Lion material. Sure, it was generic, but still managed to showcase Dave in good voice, and showed off more of the band’s melodic range. The 2021 re-recording is a definite improvement in every sense. The acoustic riff is underscored by a stately piano and a really fat bass sound, instantly showing how HITC started to think more about their arrangements after the band had been properly established. Furthermore, various tinkling keys accentuate a greater AOR heart, and Dave’s older voice – a little deeper, much richer – is better qualified to sell the emotion within the swelling melody. The bulking of the arrangement makes it sound even more like White Lion than ever before, but it’s likely that most of the band’s fans will not consider this a bad thing in any way.

That brings us to the two cover tunes which, for anyone unfamiliar with Hell In The Club, could be the main draw here. Hearing Hell In The Club give Alice Cooper’s underrated ‘He’s Back (The Man Behind The Mask) a little extra crunch without losing too much of the song’s shinier, keyboard oriented heart shows how skilled they are at arranging, while a few of Picco’s dirtier guitar parts really suit the job in hand. It ends up sounding more like something Alice might have recorded in the late 90s, creating an enjoyable listen for fans everywhere. Better yet, ‘Chainsaw Charlie (Murders In The New Morgue)’ – a cut originally recorded by W.A.S.P. – is played as straight as possible, but rather than opt for the punchy single arrangement, HITC tackle the full blown eight minute album cut, and it’s a job they absolutely nail from the first note the last. The driving, high octane riff gives Picco plenty to work with, and his retro, dirty tone sounds great hammering through chords at a high speed and high volume. Drummer Mark more than has his work cut out, working through a complex rhythm that moves between thundering beats and shifting, busy grooves, but it’s Dave who steals the show with a very confident, siren’s wail of a vocal that’s more Seb Bach than Blackie Lawless. He’s been more than able to adapt his broader style to the familiar arrangement in a way that seems very natural. It’s a superb cover, and a welcome reminder of how great W.A.S.P. could be when not peddling deliberately provocative/offensive sexual attitudes.

In mixing the familiar with the new, this is a great – if short – listen, and a fine footnote to the band’s first decade. The material might not push the boat out too far in terms of originality or invention – that’s never what HITC have been about – but in reminding people of their high energy approach and flawless influences, it all does a more than admirable job. It’s safe to say that if you’re any kind of fan, you’ll certainly want this download.