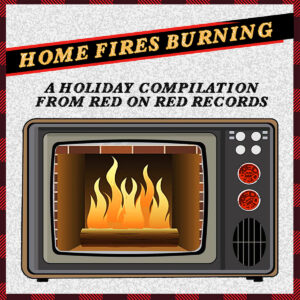 There are two kinds of people in the world: those who love Christmas music, and those who don’t. For the former, December can be a brilliantly nostalgic time, with various staples – Nat ‘King’ Cole’s ‘The Christmas Song’, Mike Oldfield’s ‘In Dulce Jubilo’ and the contents of Phil Spector’s ‘A Christmas Gift For You’ – helping to reawaken thoughts of yesteryear. For the festive music fan, there’s always time to discover something new, of course, and Justine Couvault’s Red On Red label brings something extra to the yuletide table with ‘Home Fires Burning’. In mixing the traditional with the unexpected, it manages to be quite broad in appeal and cover a lot of ground, despite only featuring five tracks.

Those following the label’s progress in the early days will already know Berk/Lehane’s ‘An Irishman For Christmas’. The track was issued digitally as one of Red On Red’s inauguaral releases, and the passing year hasn’t lessened its impact. As before, it’s biggest charm is in its ability to conjure a festive bent without resorting to the usual tropes, and in three minutes, there’s enough of a tough edge and big hook to reel in most of Jerry Lehane’s fans. The Dogmatics man is in good form throughout, delivering a world of garage rock guitars and a raucously retro lead guitar break. In a lighter contrast, Simone Berk’s vocal is equally cool, bringing strong power pop melodies that present a filtered sound against the crunchy guitars but make the very best of a hugely catchy hook. With occasional mandolin sounds adding that all important Celtic lilt, it’s a more than solid number that almost seems like an alternative xmas standard somewhere around the fourth spin.

Taking a little longer to attune due to a slightly flat/off-kilter vocal, Linnea’s Garden’s ‘All Eight Nights’ is a stripped back indie rock number placing a dual vocal against music that threatens to drop into something by The Juliana Hatfield Three at any moment. It never breaks into that massive earworm, but in its own understated way, it has a Boston rock heart that teases with a vaguely festive flutter, before Cold Expectations bring a very retro jangle pop sound via ‘Coat of Snow’. One part Edwyn Collins, three parts Cold Water Flat, the band’s 90s oriented approach lends the less than warm lyric a genuine bounce that’ll strike a chord with all lovers of the Fort Apache/Kolderie-Slade sound. Elsewhere, this EP’s most fun tune comes from Stupidity, featuring Keith Streng, whose ‘Reindeer Twist’ is a really retro workout, comprising the carefree nature of peak B-52’s with a slab of Boston derived garage rock for good measure. The energy is immense, and the sharp edged feel is further augmented by Streng adding a spirited vocal throughout where his delivery could pass for a restrained Lux Interior as he barks at the assembled musicians. Those looking for something more pop derived might get some consolation from a cheesy hook that almost seems to tap into a 60s easy listening vibe, but the trashy mood applied to everything suits the usual Red On Red ethos. Although the results will be divisive, those who like it will love it – especially those who appreciate anything that’s actually trashy by design.

No Red On Red comp would be complete without something from Justine herself, and her Black Threads close this winter gathering with a country influenced retake of the traditional ‘Angels We Have Heard On High’. It’s great to hear something so familiar dressed in new musical clothes, and her busy rockabilly stance is both exciting and melodic. Huge chorus harmonies rise above a “live in the studio” sound, and Covault’s curly voice sounds really jubilant busying itself against equally busy acoustic guitars and a terrific upright bass. In fact, it’s the bass that truly makes it; Johnny Sciascia absolutely hammers his four strings and their nature timbre gives the music a genuine drive, but by the time everything drops back for him to deliver a brief but punchy solo, there’s no doubt that this is the xmas EP’s biggest draw.

Coupled with the label’s ‘Red On Red Hots’ sampler, this xmas-themed nugget draws the label’s first year to a close in style with its five Boston-centric bands confidently putting their own stamp on some fun material. Naturally, none of it will win over the yuletide music hater, but it would never claim to be that powerful. For those looking for an enjoyable alternative or addition to their usual Christmas playlist, ‘Home Fires Burning’ should more than satisfy.