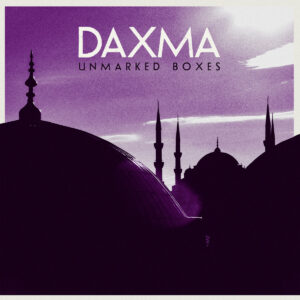 Their follow up, 2021’s ‘Unmarked Boxes’, seemed a long time coming. The wait wasn’t necessarily their fault, of course; the arrival of a global pandemic slowed down so much productivity. In the interim, Daxma have lost none of their heaviness, but their core sound has shifted from the doomy and further towards the abrasive. However, despite being almost nothing like the preceding EP, the album still delivers with regard to both heavy riffs and moody atmospheres. The extended instrumental workouts show off each of the member’s musical skills with ease, even if the resultant material takes far, far longer to imbed itself.

‘The Clouds Parted’ works its magic across a lengthy thirteen minutes, which doesn’t make it the easiest of openers. In fact, in direct relation to what the EP’s fans might be expecting, there isn’t really a song here, more a collection of heavy riffs and distinct musical passages, but in terms of metal based atmospheres, there’s still plenty to love. From its opening notes where a piano treated with a distorted overtone is joined by a cold, ambient guitar, there’s a sense that this will be rather special. Indeed, when the expected heavy, crushing riffs emerge – even heavier on the gothic than before – the fans’ expectations aren’t sold short. In delivering the funereal riff at great length, the band’s morose stage is truly set, and by the time everything drops into a quiet disquiet of cleaner notes augmented by bass, Daxma’s cinematic post metal chops seem just as strong. Everything crawls ominously until somewhere around the six minute mark, when Thomas I.’s drumming leads a very gothic passage and choirs of wordless vocals stoke up the ominous mood. The way those voices and a haunting violin come together here is absolutely key in building upon both the melody and growing unease. Via several bars of uncompromising post metal driven by harsh, clanging guitar, everything then descends into something even more intense, with a crushing doom riff clearing everything in its path, before a cold guitar and piano motif followed by the original post metal theme brings everything full circle. Although the listener doesn’t get fully reacquainted with Jessica’s vocals, everything else more than announces Daxma’s return in great style.

The similarly lengthy ‘Hireath’ sounds more like something derived from a soundtrack, as slow, grumbling melodies emerge from very dark places. By first wielding a very gothic tone, Daxma sound fairly mellow as glacial guitar lines mesh with a dour violin, whilst a sparingly approached rhythm pounds out an ominous beat. In increasing the volume, everything quickly intensifies as various doom metal tropes colour everything, and the way the overdriven riffs collide with violin will surely remind some of classic works by My Dying Bride. The arrival of a vocal almost acts as extra instrumentation in a way, as Jessica’s ethereal tone is often swamped under a wall of sound, making the lyrics almost inaudible. This shouldn’t be seen as a drawback, since in keeping the listener at arm’s length, never giving its full heart, it implies there’s even greater to come, and indeed, by the time the next movement rolls around – an even more oppressive take on the same riff, introducing harsh, almost black metal guitar sounds laid over the heavy gothic backdrop – the four musicians sound like a true force. Even with an ambient interlude where militaristic drums work beneath a soaring violin in an almost Hawkwind-esque fashion, this track never really allows for too much reflection, but between an interesting vocal approach and a hauntingly beautiful coda where multi-layered drones augment some classic doom, it could prove to be the album’s true highlight in time. …And time will be very much needed before the many textures of the Daxma sonic tapestry can be fully appreciated by many.

More palatable – if only via its much shorter duration – ‘And The Earth Swallowed Our Shadows’ is a genuine showcase for Daxma’s more ambient side. Cold, fractured guitar work leads the way, allowing for a very Scandinavian feel, setting in place something that’s bound to be taken to heart by the more open minded post rock fan. With its abrasive edge eventually complimented by a clean and quiet ambient melody, it’s very much a piece of two halves. The quiet section is disarmingly lovely; driven by plucked harp-like notes, it appears to have a disquieting feel that could be a distant cousin of some of Mike Oldfield’s sparser experiments, redressed for the twenty first century prog metal fan. This could be considered slight, but the thoughtfulness of the melody and contrast to the bulk of the rest of the disc makes it feel like so much more than an interlude, while the even more haunting ‘Saudade’ teases with acoustic guitar melodies, cold and clanky accompaniments and a slow pace that make it seem destined for an independent horror movie soundtrack. This, again, demonstrates an unexpected shift in Daxma’s main musical interests, but its creepy nature and howling feedback sounds make it no less challenging or intense than their heavier works, past or present.

The eleven minute ‘Anything You Lose’ could’ve given the band yet another broad canvas to paint some dark and inventive oddity, but at this stage of the album – about half an hour in – their slow and often confronting style is in danger of feeling far too repetitive if approached in one sitting. However looking at the track more broadly, its deeper violin tones are great and – especially if heard in isolation as part of a standalone track – the crunching guitars retain a fantastic post metal menace throughout. As part of the big picture, though, this is definitely the album’s weak link, purely through being too…samey. With ‘Comes Back In Another Form’ almost doing what it says on the tin by recycling a few of the heavier ideas first experienced during the opening track, you might think Daxma are resting on their gothic laurels a little too intently, but more so than the previous track, there’s actually plenty within their Scandinavian influenced post metal that sustains another round of crashing riffs. Also ensuring everything feels substantially different, a massive shift into heavy indie rock – introducing male vocals overlaid by cold bar chords and pounding bass drums – lends an unexpected twist, before siren like riffs and a war-like rhythm appear at odds with each other during a brilliantly constructed climax. In some ways, if you only have time to check out one track, this will certainly create a worthy first impression since it shows off most of the band’s best traits under one rather broad umbrella.

Naturally, Daxma’s intensive approach won’t make for every day listening, nor will it be welcomed by everyone, but this album more than proves the band’s adventurous spirit. When ‘Unmarked Boxes’ is good, it’s great, although the material would definitely have had a much greater impact if delivered as two separate EP releases. As it is, though, across the half dozen deep cuts, Daxma drive post- and doom metal into vast soundscapes that suggest the band are sporadically pushing forward, whilst honing their craft as they go. If only half the world’s prog metal bands could be this progressive, lovers of supposedly cerebral rock and metal would actually be challenged in the way they deserve.