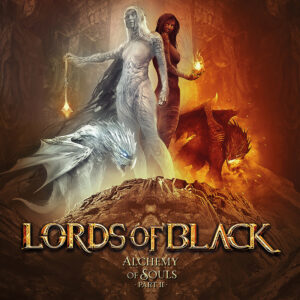 Romero’s busy spell continued with the awaited release of the second chapter of Lords of Black’s ‘Alchemy of Souls’ in October 2021. Much like its earlier counterpart, it’s a record absolutely loaded with top drawer melodic metal, and Romero’s vocals – although often on the huge side – continue to show why he’s become such a hit with the veteran rock and metal crowd.

Following a long intro of droning synths and eastern sounding noodles (‘Prelude: Alchima Confessio 1458 A.D.’), ‘Maker of Nothingness’ instantly takes on a signature melodic-yet-still-heavy style for the band. Adopting a mid tempo, the tune has a definite groove, but it’s very much of the lumbering variety with Tony Hernando’s guitars taking a very dominant role. Although an absolute banger akin to the previous volume’s ‘Dying To Live Again’ would’ve certainly been a much more immediate attention grabber, once Romero steps up, everything makes great strides into becoming a very solid metal workout. Once echoes of old power metal tracks jostle alongside a moody Dio-esque sound, it very much allows the whole band to show off their powers without sounding too grandiose. As before, despite a heavily accented delivery, Romero has a great presence, and the rest of the band demonstrate a lot of musical muscle. A couple of lyrical clichés aside, it’s very much the sort of thing you’d expect from Lords of Black, but despite an absolutely cracking lead guitar break, there’s a nagging feeling the album has started on half power. In some ways, this makes sense since it drops the listener into the middle of an ongoing narrative, but as things progress, it becomes clear that this second chapter is a much darker record than its predecessor, and with its massive riff ready to crush everything, ‘…Nothingness’ is actually a solid representation of about half of the oncoming material. It’ll take several listens to imbed itself, but once it does, most of it proves more than worthy of the Lords’ growing legacy.

Adding a more melodic touch, ‘What’s Become of Us’ is an instant classic. Melding a huge AOR-inflected chorus to thundering drums more worthy of a power metal band, the Lords show a real flair for melodic metal. During the verse, there’s even more of a melodic turn when Ron’s voice tops a more spacious groove and Tony drops in a few clean guitar chords, but the slightly poppier feel never comes at the expense of the band’s huge sound. For lovers of the purer metal-oriented elements, a hefty chugging guitar used to bridge the verse and chorus really lends weight in a simple way, whilst a hefty groove metal tinged bridge contrasts the sizeable 80s melodies with something far dirtier. A couple of listens will be more than enough for the hooks – both musical and lyrical to stick. Falling somewhere between a ‘Master of The Moon’ era Dio number and one of Malmsteen’s better efforts, ‘Death Dealer’ will thrill those who love Lords of Black when they approach everything at full pelt. Following an atmospheric synth based intro, Jo Nunez offers a thundering drum roll and the band crashes through a piece of melodic power metal falling between ‘Eclipse’ era Yngwie, the thrash of classic Trivium and the bombast of Firewind. Across the four minutes, the combination of massive chorus and relentless riffing doesn’t offer anything especially original, but in terms of energy and playing, the Lords hit everything perfectly.

Another highlight, ‘Bound To You’ opens with a chopping guitar riff that utilises a stereo split for dramatic effect, coupled with a jaunty keyboard line, before settling into a bombastic metal track that occasionally sounds like Lords of Black reworking something from the world of Craig Goldy’s Dream Child. Chorus-wise, everything is larger than life and very Euro-centric, but as you might expect, it’s the sort of thing Romero takes in his stride. With Ron already having proved himself with higher profile acts, this is more of a showcase for his bandmates, and its great to hear Nunez fill the bulk of these four minutes with a massive galloping drum part that sounds unstoppable and Tony taking the time to split his featured solo between a huge metallic shred and a more melodic, soaring sound. This essentially shows how the Lords of Black sound teeters between classic 80s heavy metal chops and a Place Vendome-esque grandness, but almost always in a very considered way. The combination of pneumatic rhythms and mournful piano at the heart of ‘Before That Time Can Come’ continues to explore a very theatrical stance, but for fans of adventurous metal, it’s a tune that’ll definitely entertain. Featuring one of Ronnie’s best vocal performances this time out, he moves between a very stage-oriented sound (tapping into a Pride of Lions sense of hugeness) and a more melodic rock influenced style, reminding the listener of his still recent work with Sunstorm. With the chugging guitar work counter-balanced with a vibrato filled lead guitar break and a squirly synth solo worthy of Jens Johannson.

In a slight change of mood, ‘Mind Killer’ opens with a deep chug, and it’s vague downtune brings out the much darker side of Lords of Black. The moodier sound also allows bassist Dani Cariado to wield a much fatter tone. Across several bars, Lords of Black show how they can drive a near timeless metal sound into your skull with ease. Given that the music is so good, it’s a pity that Romero chooses to fill the track with a fair to middling impersonation of Dream Theater’s James Labrie (a poor performer at best), and his vocal style will certainly make this track more divisive than most. Luckily, a top notch guitar break and some ominous sounding keys courtesy of Hernando make up for that, whilst ‘In A Different Light’ drops further into a prog metal sphere with an off-kilter groove, tribal drums and horsey guitar squeals. Half a world away from the trad metal of ‘Death Dealer’, it shows how broad the Lords’ talents actually are, even if the end results aren’t quite as fun. In terms of full on metal, ‘Fated To Be Destroyed’ is the heaviest track this time out – possibly even one of the heaviest tunes in the band’s catalogue, opening with a chug equal to Metallica’s ‘For Whom The Bell Tolls’, moving through a verse that sounds like a dirtier Megadeth/Overkill steal, and eventually ending up in a really bombastic mood for a hook where Romero curls his voice in a huge manner. The moments that borrow from melodic thrash are brilliant, but those are occasionally offset by theatrical vocal moments that sound as if they’ve been dropped in from a different tune entirely. It shouldn’t necessarily work as well as it does; the fact that it’s one of the most striking tracks owes so much to Hernando’s love of thrash and classic metal, and the way he’s able to make those late 80s influences sound so vital.

This second volume of ‘Alchemy’ doesn’t share anything as huge as the ten minute title track from the first chapter, although in terms of epicness, the lengthy ‘Sympathy’ comes close. A seven minute duration more than allows enough time for the Lords to work through many of their core sounds. From the opening twin leads, there’s a sense that some good, melodic metal will unfold, and once some jagged rhythms and confident vocals take centre stage, it does not disappoint. Whilst the guitar playing is distinctly of Tony’s hand, the way the band hit upon a style that sounds like mid 80s Judas Priest fronted by Eric Martin in a bad mood settles upon something rather more melodic than usual. Fans will surely be impressed by Romero here; he presents himself as the consumate old style rock vocalist, shifting between melodic rock passages and leather trousered squeals with ease. Musically, the band are their best here too, with a couple of fantastic lead guitar breaks showing their love for classic metal. Being critical, the chorus could, perhaps, have been a little more immediate, but when the actual playing is as strong as it is, it’s a minor point. Once everything falls away and Tony closes the track – and album – with a a repetitive riff that at first sounds like Gary Moore circa 1983 with its shrill edge and gathering speed and then makes a dramatic shift for the kind of crashing climax beloved by a late 80s Yngwie, it’s impossible not to be impressed.

Although somewhat moodier in places and occasionally missing the mark in others, the bulk of ‘Alchemy of Souls, Part 2’ is superb and cements Lords of Black’s place as one of the better Euro metal acts. It’s is the kind of broadly adventurous metal outing that fans will love, but hopefully, Romero’s previous associations with Ritchie’s pretend Rainbow will pay off in the long term and bring in a wider audience. Lords of Black more than deserve that recognition. For lovers of classic metal and melodic power metal, even with a few flaws, this comes highly recommended.