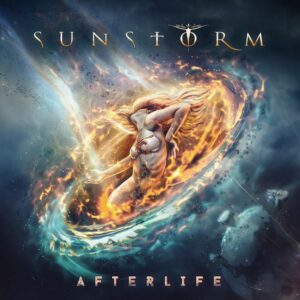 Well, yes…and no. This album – regardless of band members – still plays very well. It’s obvious from the outset that the gathered musicians are all very talented. Maybe a name change would have been sensible as ‘Afterlife’ certainly doesn’t always sound like the Sunstorm you’ve previously loved, but the bulk of the recordings present some fine performances.

By opening with something a little heavier and hugely derived from a European stance, though, the album doesn’t necessarily get off to the best start. However, with a jagged riff that comes across as a cross between generic Euro bombast and Rainbow in an aggressive mood, the title cut certainly grabs the attention. It never, ever says “Sunstorm”, though, and this has the potential to put off any doubters in record time. The riffs are speedy, but semi-melodic – never a million miles away from the harder moments from ‘Eclipse’ era Malmsteen. These influences are further elevated once new vocalist Ronnie Romero starts to sing. Approaching the track as if he were fronting a European metal band, his hard edged style has elements of Dio, but retains a melodic edge that really comes through on the chorus once things slow down. Unfortunately, by then, it’s a bit late to be reminding people a little more of the band Sunstorm used to be; the damage has potentially been done. Nevertheless, it’s a reasonable chorus, and although Ron is guilty of over-singing, the rest of the band sound strong enough. Maybe the band wanted something Rainbow-esque as opening bait since Romero came to wider public attention through his associations with Ritchie Blackmore? Whatever, it’s not the most promising of starts, presuming you’re listening as a pre-existing Sunstorm fan (which doubtless most listeners will be).

At their best, this new – though not necessary improved – Sunstorm really shine on the album’s more AOR-centric material. On tracks like ‘One Step Closer’, a mid-tempo rocker straight from 1989, Simone Mularoni’s guitars have a great tone as he chugs through a classic melodic rock riff. The track’s huge chorus offers something that’s easy to imagine JLT steering to glory, and although new man Romero’s delivery is slightly abrasive in places, he takes the bulk of the song and really runs with it, often showing off a massive set of vocal pipes. Despite this, the song’s best moments are when Romero is quiet: Mularoni’s featured lead guitar break all too quickly acts as a reminder of how Romero’s slightly more metal-oriented approach might not always be the best for Sunstorm in the long run, and as he attacks the various sweeps and soaring notes with a supreme confidence, everything sounds great. With the rest of his bandmates tackling an arrangement that sounds like something from an Issa album, Sunstorm’s musical credentials are without question. Similarly, ‘Stronger’ taps into some superb playing. Ignoring the fact that the intro (and subsequent main riff) appears to be a direct steal from Malmsteen’s 1988 track ‘Hold On’ (featuring Joe Lynn Turner), everything about the arrangement taps into a classic sound for Sunstorm. Across the five minutes, you’ll find some fine twin lead guitar sounds, a superbly constructed lead break and the kind of chorus that really sticks. Backed with fine harmonies, Romero sounds at his best and, even though there are times he sort of sounds like Eric Martin forcing his voice unnaturally, his performance is more than solid throughout. In terms of something a little rockier, ‘A Story You Can Tell’ starts out like ‘1987’ era Whitesnake, before scaling back to reveal a pure AOR verse where a blanket of keys underscores a fine vocal. Building back into the chorus, the guitars crank up a little more and although it’s another example of the new Sunstorm creating a distinctly Euro take on a melodic rock past as opposed to the classic US tunes they hoped to recreate, it’s enjoyable in its own way. Like the best tunes from 2016’s ‘Edge of Tomorrow’, this chorus-centric approach comes close to showing why Sunstorm have been so beloved, regardless of shifting line-ups.

An obvious highlight, ‘Far From Over’ combines a verse with a choppy riff that appears to draw influence from the massively overlooked Shotgun Symphony debut from ’94, coupled with the kind of bombastic chorus that would’ve sounded even better on the first couple of Sunstorm discs. It’s here that the current line-up really proves itself: the lead guitar work is expertly handled; the song writing – although working in an AOR-by-numbers style – shows off some easy melodic flair, and even Romero steps up to give one of the best performances of his busy career. [At the time of this release, he’s still the frontman with his own Lords of Black, as well as being vocalist for The Ferrymen and Vandenberg. Busy lad.] In short, these are four or five unmissable minutes, where Sunstorm defy the odds and turn in the kind of performance that would still rank them as one of the best bands within the Frontiers Records stable. Despite Romero often doing his best to fill some pretty unfillable shoes, the big ballad ‘Lost Forever’, on the other hand, is definitely one of those times you’ll mourn the absence of JLT, especially with some heavily accented over-singing making everything sound even more like total fromage. [If you’re reading this anywhere other than Real Gone, those thieves from the well-known AOR piracy website have stolen it to try and mask their illegal downloads. If you spot it there, please let us know.]. However, looking beyond Romero’s over-performing, there’s some fine music to be discovered. Del Vecchio does a top job in creating a blanket of strings via his keys (real orchestras clearly aren’t within Frontiers Records’ meagre budget) while the rhythm section adopt a respectfully sedate approach throughout. As with so much of this long player, the real star is Simone, whose lead guitar work shows off a fantastic soaring bombast that, when reaching its peak often sounds like Malmsteen circa 1990, albeit with a sensible amount of notes and a good ear for melody.

Elsewhere, the album is padded out by ‘Swan Song’ (a decent melodic rocker akin to a harder edged Bonfire), ‘I Found A Way’ (an unexpected and slightly funky throwback that could be the work of the long forgotten Jagged Edge or another Matti Alfonzetti project) and ‘Darkest Night’, a chunky rocker that never seems to try anything outside of an AOR comfort zone but still manages to hit the spot thanks to another great chorus and solo. Again, lovers of the more tuneful end of the Bonfire catalogue and other similar European fare stand to gain the most enjoyment here.

With no original members and a bigger shift towards melodic metal in a couple of places, this is sometimes feels little too removed from Sunstorm’s 2012 masterpiece ‘Emotional Fire’, and for better or worse, it doesn’t even feel like the Sunstorm who gave the world the tougher sounding ‘Road To Hell’ in 2018. Fact is, Joe Lynn Turner was integral to the band’s sound; to replace him was utter madness. Still, looking at what we have here, ‘Afterlife’ still plays very naturally and is often much better than it has any right to be. To get the best from these songs, though, it’s best to approach them as if they were the work of a brand new band. If you’re able to take most of ‘Afterlife’ at face value – and some listeners certainly will be more than capable of doing so – it’ll fill a more than enjoyable fifty minutes.

Read reviews of a couple of earlier Sunstorm albums here:

The Road To Hell
The Edge of Tomorrow
Emotional Fire