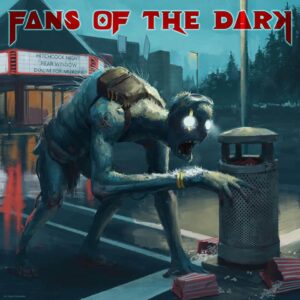 There’s an old saying that you shouldn’t judge a book by its cover. Luckily for Uriah Heep and Deep Purple, the same is true of album sleeves, and there’s many a good tune hidden behind an ugly piece of art. Fortunately, this also sort of applies to Sweden’s Fans of The Dark. They’ve saddled themselves with a bad band name, cheap looking logo, and sleeve art depicting a Gollum-tortoise hybrid with car headlights for eyes, but despite that, their debut LP is home to a trilogy of fairly decent melodic rock/melodic metal tunes. These are tunes that would definitely go unheard if we were going solely upon appearances. The album also includes a couple of genuine clunkers, so you could definitely call it a mixed bag, if you were feeling polite.

The horror based narratives give the material a central theme without going the full concept route, and without being intrusive enough to be off-putting to those who just enjoy songs for songs’ sake. What’s more important here is the playing itself, and between guitarist Oscar Bromvall (known for his connections with the excellent Palace) and drummer Freddie Allen, Fans of The Dark possess an enthusiastic core that often rises above vocalist Alex Falk’s occasionally testing vocal style. It doesn’t always rise above Allen’s terrible lyrics, but that’s a different matter. Despite some huge flaws, those looking for some melodic guitar chops and a decent solo or two will find something of interest.

The album’s best songs show off a more than competent band. The biggest highlight comes from ‘The Running Man’, which kicks off with some brilliantly melodic, chopping guitar lines which carry through the track’s verses, whilst Alex taps into a grandiose performance that actually suits the job in hand. Moving into a huge chorus, there’s more of a focus on tune and by reworking a melody that sounds vaguely like Joe Satriani’s ‘If I Could Fly’ to their advantage (let’s hope they don’t get sued), it really gives this album a massive boost. So familiar are parts of the melody that first time listeners will feel like they’re in the presence of an old classic, and the Richard Bachman themed lyric is one of the album’s most fun. Factor in a meaty bass sound from Robert Majd, an atmospheric spoken word intro, and a really unexpected approach to a guitar solo where Bromvall throws out unconnected notes before sliding into a very 80s shredfest and it beomes a real winner. Even if nothing else on this record truly worked, this alone would prove that Fans of The Dark can really hit the mark when they try.

Also showing promise, ‘Escape From Hell’ mixes a hard rock crunch with a few AOR harmonies, sounding like a sidestep from some of the Palace material. Lyrically, it’s a full on cheesefest and is further hampered by translational issues, but several chorus harmonies and a great guitar riff make it worth hearing. Falling between mid 80s Y&T and an MTV chasing Judas Priest, this brings more than enough old school charm and the whole band works hard to whip up a few 80s thrills, with Bromvall very much leading the charge throughout. Slowing down, a number inspired by Hitchcock’s ‘Rear Window’ is home to more dodgy lyrics but shows off the band’s softer side admirably on a tune that harks back to ‘Prisoners In Paradise’ era Europe with its solid mid tempo groove and huge vocals. As with so much of the Fans’ material, the music is more impressive than the song itself, and this particular number demonstrates how solid Freddie sounds behind the kit when working through a meaty groove, before ushering in a massive shift to accommodate a busy guitar solo. In some ways, it sounds like two ideas glued together, but due to some decent musical chops and a lot of balls, the band make it all seem fairly natural.

Elsewhere ‘Life Kills’ passes muster as a spirited melodic rock number replete with massive harmonies and a great energetic feel. It would be one of this band’s strongest numbers if only it didn’t come across quite so much like a First Signal offcut (an influence driven, presumably, by Bromvall’s previous associations with Palace), but on its own merits, it shows off some great playing and a decent ear for a melodic rock hook. Fans of the style won’t find anything especially groundbreaking, but there’s a sense of fun coming through at almost every turn, further suggesting this band has some good potential despite never rising much beyond the second or third division in melodic rock terms.

Unfortunately, the rest of the album wavers between fairly iffy, plain ordinary, and flat out bad. ‘Dial Mom For Murder’ rivals ‘Escape From Hell’ in terms of energy, but doesn’t really do anything to stand out. After ‘Escape’, it feels too much like an easy retread of a melodic metal past, and despite a pleasingly clean guitar sound and some enthusiastic chorus vocals, it’s the sort of thing Michael Palace does a thousand times better. The Foreigner’, meanwhile, offers a reasonable melodic metal tune where Bromvall and Majd do their best throughout, but any attempts at empathy are blighted by a heavy handed lyric. Atop a chunky riff, we’re told “He’s a foreigner, foreigner / And his new world is a cruel world / He’s gotta learn that winners take and losers burn”, before various other clichés are served up about there being “hell to pay” and how “this is no game, you’ll live or die”. In terms of human interest versus subtlety, surely only Yngwie Malmsteen would do a worse job of conveying a sympathetic social attitude. After you’ve heard this a few times, it’ll begin to grate, despite a strong melody. ‘The Foreigner’ is far from being this album’s best offering, but it’s still better than ‘The Ghost of Canterville’ – an eight minute tune that promises so much with an early harmonic guitar, but then plods about for eternity – and ‘Zombies In My School’, a lengthy piece about the undead over-running the education system that needs to be heard to be believed…or not.

The album has a very hit and miss approach, but the aforementioned ‘Zombies’ is flat out embarrassing. Kicking off with a sparsely arranged intro where Falk carries a melody in a theatrical style was a really bad idea since he really doesn’t have the voice for it. Giving Freddie’s terrible lyrics absolutely nothing to hide behind was a far worse one, and it leaves the listener no choice to wince and grit their teeth as the protagonist tells of undead beings that “tried to fit into the school” but “are secretly cruel”, before making it even worse when he suggests “all they want is a taste of us” and how the “teachers said I should stay cool”. It’s like experiencing rock lyrics penned by an over excited twelve year old. Luckily, the music has a couple of moments to detract the general awfulness, and Bromvall’s chugging rhythms overlaid with a cleaner melodic tone demonstrate more of the talent he’s shown elsewhere. Like ‘The Ghost of Canterville’, what none of this really needed was to be dragged across a painful eight minutes, as if it were as grand as an Iron Maiden epic or as thoughtful as one of Blue Oyster Cult’s horror opuses. It really is a three minute novelty with a lot of padding that, unfortunately, creates a terrible lasting impression for the album as a whole.

This debut is shamelessly old fashioned, but when the material works, it’s none the worse for that. There are moments where the tempo could’ve done with being a bit perkier, but most of the playing is fine. On the plus side, a couple of the hooks are certainly big enough, and Bromvall’s guitar work often retains a strong melodic presence, so it’s a shame he couldn’t put it to better use. It’s the kind of album that sounds like it ought to be a novelty, and yet Allen and Falk sound deadly serious. As it is, there might be enough here to entertain the less demanding rock fan for a while, but most people will spin this a couple of times, baulk at the lyrics and move on. Despite ‘The Running Man’, ‘Escape From Hell’ and ‘Life Kills’ definitely being worth an ear, this is definitely an album to approach with caution.