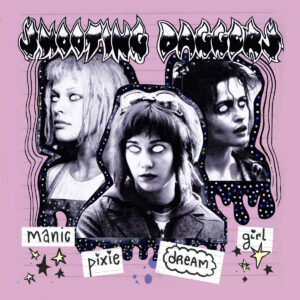 After a short flurry of distorted notes, ‘Manic Pixie Dream Girl’ launches into a really hard edged punk riff that has a pleasingly retro feel, whilst still feeling current and vibrant. Old style riot grrrl tropes collide with a sharper hardcore edge which brings out the best in every riff, especially during the second half when an extra layer of guitar shimmers coldly against the sledgehammer edge. Lyrically, it’s just as forceful with the protagonist pointing out that they are more than “your vapid Ramona Flowers” and deserve more than to be objectified for the pleasure of others. Delivered in a voice that retains all of classic hardcore’s venom, but tempered with a distinctive British twang, there are traces of Natterers in its punkiest intent. Looking beyond the influences, it’s a flawless performance for the style, reminding everyone that the US does not have the monopoly on great hardcore.

Stretching out, ‘Missandra’ works a sludgier riff that harks back to the garage grunge sounds of Tad during an opening verse. It’s overdriven sound brings a slightly different anger, but the relatively more melodic style doesn’t ever lessen the impact of the performance that’s about to unfold. After using those opening moments to warm up, the band cranks the gears, shifting effortlessly into a hardcore punk/metalcore hybrid that truly works as a vehicle for their message. Again, this isn’t the cheap posturing or sloganeering as displayed by so many hardcore bands; it’s pointed and important, and full of intent which, when coupled with a fantastically driven vocal, results in the kind of intensive performance that’ll make most people sit up and take notice. With the inclusion of a massive hardcore breakdown derived from the early 80s and the American scene’s pioneers, driven by an equally massive grumbling bass leading into a chugging metal-edged groove to close, you get the feeling the band have packed so many of their influences into a taut three minutes here. However, it never sounds glued together or unnatural; there’s a genuine flow that works brilliantly, and in showing off the whole band’s collective talents, it’s an arrangement that’s never less than fantastic.

This is furious. These two tracks have such a force, it’s clear that Shooting Daggers are about to make a massive impact on the UK hardcore scene. Sure, there’ll be a core of people who feel affronted by the overtly feminist lyrical slant, but that only proves why such direct lyrical platforms remain necessary. And for those who care not for these messages – more fool them, ignorant little fools as they are – there are still several massive riffs to contend with; some of the biggest of ’21, and in a hardcore/metalcore crossover sense, certainly some of the biggest since the rejuvenated Capra emerged during the huge lockdown of 2020. Grab a download of this release now – you won’t be sorry.