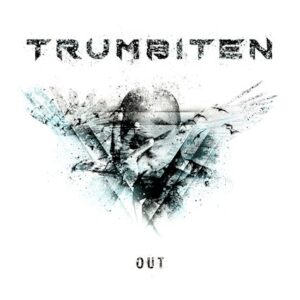 Unfortunately, their follow up ‘Out’ (released in September 2021) isn’t so much a step forward as leap backwards, and its predecessor’s charm – helped no end by a variety of vocalists – has been side-lined in favour of a hugely old fashioned influence. The female vocals are gone, and in their place is a man who takes all of his cues from the likes of Ronnie Romero and the performers who model themselves on a metallic, leather trousered bombast from 1986. It’s not that their new frontman Leonel Silva has a bad voice – he delivers everything with strength and confidence – it’s just that his approach is shamelessly “classic metal”, and to suit, Trumbiten’s songs now sound like obvious throwbacks instead of sounding vaguely contemporary for their time.

Still, looking at what potential fans are offered, it’s all played very well. The lead track ‘Break Out’ begins with a pulsing synth noise, giving no real indication of what’s to come; in terms of a simple attention grabber, it’s very effective. Once the main riff arrives – all crashing drums and chugging guitars – the opening sounds hint at Judas Priest circa 1984 before branching out into fairly generic Euro metal, which the band pummels for all it is worth. The music is solid for the style: the guitar tones are great, and the underscoring synths lend something of an extra weight; the featured solo is impeccably played and everyone sounds particularly enthused. The vocals come with a real force, but again, are more than suitable for the job in hand. The real problem here is the songwriting itself. The message of finding inner strength is admirable, so it’s a shame it couldn’t find a better lyrical vehicle than a bunch of old clichés. In a huge voice, Silva implores everyone to “break the cage” and “break free from inside”, before suggesting there’s “nowhere to hide”. He’d get away with one of these hoary old phrases, but hearing all three wedged into the main hook is a like experiencing the best efforts of someone who overdosed on old Keel records during the pandemic lockdown.

Moving on, ‘Loner’ opens with a busy riff and some great drums, before exploding into a busier metal workout where the lead guitars threaten a twin tone and the choppy rhythms threaten something a little prog metal-centric but, unfortunately fail to deliver on the initial promise. Once Silva starts to wail and bellow, everything is dragged back at speed to the 80s, and his bombastic style is very dated. Coupled with lyrics about “racing the night” and “feeling alive”, it’s little more than a veritable cheese-fest, but looking on the bright side, some of the guitar work is quite smart in an old school style. It just isn’t enough to save this from sounding terribly dated, unfortunately. ‘Eagle Inside’ features another great intro, this time lifted from Iron Maiden circa ‘Powerslave’, but quickly descends into a swamp of embarrassment when a pirate metal melody takes over and Silva puts in the kind of scenery chewing performance that makes Resurrection Kings’ Chas West seem like a rank amateur, and ‘Run’ rounds everything out with a rousing rocker where twin leads and chugging riffs evoke some classic metal which – unpredictably – is spoilt by a booming vocal and over repetitive chorus hook. If you’re able to tune out the vocal and ignore most of the lyrics, it’s much better, since it features the EP’s strongest arrangement with Trumbiten tackling twin guitar parts worthy of Trivium. These great sounds beaver beneath the bombast almost throughout and a great heavy chug used effectively elsewhere is a reminder of the band’s past greatness. It’s great playing that certainly deserves to be at the heart of something much better than this.

Those who enjoyed Trumbiten’s previous blend of classic metal sounds tempered with a few more modern traits might find something to enjoy here, but it’s more likely that this incarnation of a fluid band will attract attention from a different rock/metal demographic. If it works for them, that’s great, as there are a lot of people (especially in Europe) that really enjoy similar fare from labels like Frontiers Records, but those expecting a straight follow up to ‘Emotions’ might feel somewhat short-changed.