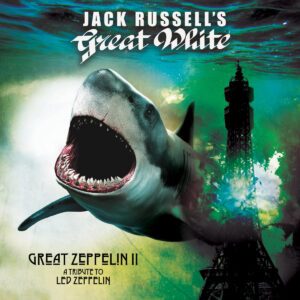 Something of a fan favourite, Great White’s 1999 release ‘Great Zeppelin – A Tribute To Led Zeppelin’ did exactly what it said on the tin. Other bands have certainly covered the mighty Zep in more inventive ways, but in terms of capturing a mood and an authentic sound, Great White’s live recording ranked among the best Zep tributes ever. This was helped no end by Russell being in superb voice throughout and really unleashing his inner Plant on strong renditions of ‘Immigrant Song’ and ‘No Quarter’. There are even a couple of moments on the recording where the vocals sound so authentic, you almost forget whom you are listening to. ...Almost.

In lots of ways, that live set covered more than enough ground, mixing the populist tunes with a couple of deeper cuts like ‘In The Light’ and ‘The Rover’, but fans still hankered after a follow up and, some twenty two years after the original Zep set, Jack Russell’s Great White return to their biggest influence on the prosaically titled ‘Great Zeppelin II’. It isn’t on the same level as the previous live disc, but on this second honest tribute to the mothership, Jack Russell’s bigger fans will certainly find enough to enjoy. During ‘Good Times Bad Times’ guitarist Robby Lochner does a good job of replicating Page’s early Telecaster sound against a hard-edged drum part, while Russell – after coming in slightly too high on the opening verse – quickly settles into a very retro performance that suits him very well indeed. It’s bassist Dan McNay who steals the show, though, first by absolutely nailing the Jones bass fill at the end of the chorus, and then by really hammering the busy bassline through the closing part of the song. He captures Jones’s original muscle, but thanks to being placed high in the mix, his playing seems to carry even more weight. A very faithful ‘Heartbreaker’ provides something of a great show piece for all concerned, with Lochner grappling with the main riff’s swagger with ease, before tackling Page’s semi-sloppy lead break in a very faithful way. It’s likely he could play it better – even taking it in a more bluesy direction – but that’s really not the point here. Drummer Dicki Flizsar adds some proper oomph during the fast section and Russell sounds as if he’s enjoying himself throughout. The shrill edge of his younger delivery may well have gone, but he still sounds like a man capable of delivering a few big wails when required. Since ‘No Quarter’ had already appeared in a great version on the original live album, the decision to create a second studio based take seems like an odd one, especially given how many Zep tunes they could have chosen, but the extended ten minute arrangement – some three minutes longer than Zeppelin’s own studio cut – has it’s own charm. Russell sounds very at ease behind the vocal filters during the quiet verses and Lochner drops in some fierce solos during an extended instrumental break, but the whole thing is driven to glory by Michael Olivieri whose phased electric piano work really shines at every available opportunity. The tightness of JPJ’s original take isn’t quite there, but in terms of recreating a near perfect sound and an authentic mood, his contribution to this track is certainly one of this disc’s highlights.

Something of an underrated cut from ‘Houses of The Holy’, ‘Dancin’ Days’ is a good fit for the band with its slow groove, almost lolloping through four minutes in a way that’s very sympathetic to Russell’s much calmer vocal style. It doesn’t match the Stone Temple Pilots version in terms of making it their own – Jack and friends merely choose to play it straight – but the end results are solid enough, and the same applies to ‘Houses of The Holy’ itself, with Lochner clearly enjoying this opportunity to work through one of Page’s funkiest riffs. Russell doesn’t attempt the kind of Plant-esque squeal that provided the heart of the early Great White tunes, but his more soulful and mature delivery sort of suits the job in hand. Without ever being flashy, it’s a pleasure to hear a band covering one of Zep’s lesser covered numbers and doing it well.

A genuine stand out, ‘Livin’ Lovin’ Maid’ works some decent harmonies and a killer bassline against the expected groove, and although the music recycles the old Zep classic in a fairly straight manner, it’s a pleasure to hear Russell actually reaching some of the vocal heights his younger self would’ve taken in his stride, which is a lot more than can be said for ‘Communication Breakdown’, which fares less well due to Russell wailing throughout and reaching for a few notes that are clearly rather beyond him now. As before, though, the band are in great shape with Lochner dropping in a top notch lead break that conveys most of the original’s excitement and the drums maintaining a decent, weighty sound throughout. A faithful trudge through ‘Whole Lotta Love’ has neither the edge or passion of Zep’s 1969 cut, but for the less demanding listener, there’s still enjoyment to be had hearing different musicians taking on its monolithic riff, even if the trippy mid-section seems a little unsure of itself, and a stomping ‘Misty Mountain Hop’ comes across as an older Great White going through the motions, but the presence of one of the world’s greatest riffs keeps everything motoring for the five minutes. Those willing to keep a much closer ear will hear some cool bass fills from McNay, gradually proving to be one of this band’s most gifted players.

A recording of ‘Moby Dick’ is the ultimate in filler; it’s very much a case something that would work live, but seems pointless on a tribute disc, even if it shows off some decent chops from Flizsar, but that’s balanced out ‘The Rover’ – one of the best tracks from the first ‘Great Zeppelin’ disc – where the whole band lurch through the sassy groove as if it were made for them. The dirtier guitar sound that dominates throughout is handled brilliantly, and a complex bass line punches through the mix in a way that reminds everyone, yet again, that McNay really is the glue holding everything together. Although more restrained than his 90s self, Russell delivers the vocal in a cool and natural way that sits somewhere between the banshee wail of his youth and the blues-edged cry of the present. Although a couple of louder moments edge towards the uncomfortable, it’s a solid performance, all things considered.

Despite most of this disc being good for what it is, there’s something about the version of ‘Kashmir’ that really lacks spark. Russell’s voice is good; there are times when he sounds better here – and certainly more at ease – but it just seems too…safe. Nevertheless, as with a few of the other tunes here, if you’re happy enough to hear decent musicians playing old Zeppelin tunes for the love of it, this – and a solid but workmanlike ‘Trampled Underfoot’ – will pass time pleasantly enough. What this didn’t need was a rendition of ‘Stairway To Heaven’ with slightly flat recorder work and a guitar tone that lacks the uplifting tone of the original. Russell does nothing to push himself; he almost speaks his way through the early parts of the song – even dropping in a couple of Plant’s now ad-libs from the most famous live version from Madison Square Garden 73 – while Flizsar’s drum sound is particularly weak. ‘Stairway’ is something of a sacred cow, but the live version from Great White’s late 90s ‘Great Zeppelin’ disc proves that it can be covered effectively. This, unfortunately, is just…dull, and despite best efforts with one of the all time great guitar solos during the climax, it merely sounds like a bar band on a free cover charge; not entirely befitting of musicians with decades’ worth of experience.

This recording doesn’t always bring the vibrancy and adventure of a whole new work, but in terms of keeping the band busy at a time when gigs would have been lean to non-existent, it’s a recording that very much serves a purpose. Sure, there are a few things that could’ve been improved upon and a couple of tracks are best avoided, but for those who’ve stuck with Russell through thick and thin – or those good times, bad times, indeed – ‘Great Zeppelin II’ offers just enough strong moments to make it worthwhile.