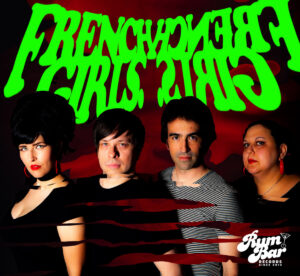 Their self-titled full length LP (released in 2021 at the beginning of a northern hemisphere summer) offers much more of the same, only sharper, even recycling a couple of the EP tracks for good measure. The big difference here comes from the Girls having an actual recording budget at their disposal. A cleaner sound allows the material to sing with more of a clarity, yet without pandering too much to a commercial bent. What we have here, in essence, is a fantastic garage punk LP that could rival some of the late 70s greats. An instant stand-out, ‘Hottie’ presents the more commercial side of French Girls’ garage rock by working a fierce riff with a hefty twang and vague surf-punk undercurrent. It’s a track serves up hugely retro sound at great speed, with vocalist Che Beret constantly battling guitarist Michel Ouioui for dominance throughout. With a slightly underused call and response vocal being effective without sounding forced, a huge focus on a massively repetitive hook and with no musical flab, this shows the band at their most direct. Utilising a lot more distortion and a swaggering bassline, ‘Pizza Party’ isn’t shy in flaunting more of a trashy rock ‘n’ roll style, drawing influence from New Bomb Turks (via a hefty twang) and the early Donnas (a suitably brattish vocal) and combining both elements into a perfectly retro garage rocker that constantly threatens to go full on punk. As if that wouldn’t be enough, a smartly employed 50s edge and a couple of howling backing vocals hint at cartoonish horror rock for good measure, firmly playing up the band’s trashy cool. Opting for even more of a punky vibe,‘Dude Rocker’ appears to channel the spirit of ’77 with some superb chops, with each riff accentuating a love for Generation X and The Rezillos. In under two minutes, the Girls’ punky credentials are more than secured. This performance is sharp and retro, but without sounding like lazy, obvious recycling of an alternative past. They play as if they truly mean business, delivering a classic punk style as if absolutely new and vital.

Taking a left turn into something even quirkier, ‘He’s All That’ serves up a little more of the band’s beloved girl group sass; not just in the subject matter, but also in the way a few of the vocals seem to blend old a couple of old Phil Spector vibes into something that falls between the earliest Go-Go’s and Josie Cotton. Keeping the garage rock end up, Michel throws in a few bridging riffs that appear to be borrowed from the first OFF! LP – very cool – in a move that gives the performance a real tension. The bubblegum aspects are really flaunted throughout ‘No Morals’, a punky tribute to early 60s pop that sounds like a supercharged Chiffons, complete with a chorus melody that borrows heavy from the “Wall of Sound” and Gold Star Studios. Even if a yelping, worldless hook seems like a step too far, there’s plenty about this track that validates the band’s claim of having strong pop roots, even if that isn’t always obvious elsewhere. ‘Independent Woman’, meanwhile mixes garage punk with a smidgeon of rockabilly, which allows for far more of a melody, showing how Che’s voice seems to have improved since the EP recording. Each of these tracks demonstrates how much French Girls have grown, musically speaking, providing the heart of this collection with a trilogy of tracks that are all just different enough from each other to keep things interesting. By stretching out a little, ‘Summertime’ feels almost epic by French Girls’ standards at almost three minutes, but the extra time is merely used to hammer home a fantastic chorus. From a musical perspective, it’s business as usual with a finely crafted garage rock riff underscored by a power pop hook. There’s something here that might remind some listeners of the more melodic output from The Soviettes; other listeners will certainly hear traces of The Slits and maybe even Shonen Knife. Whatever your take, it more than shows a garage rock quartet somewhere near the top of their game, both in terms of riffs and hooks. The fact that a little more time has been taken over forming a great melody certainly doesn’t hurt.

As for the re-recorded EP tracks, all three sound much better in their slightly more expensive, shiny shoes. ‘Crazy Yo!’, in particular, very much benefits from less distortion compared to its earlier take. This allows Che’s vocal to really stand, while the sharper recording shines more of a spotlight on Chiffon Batton’s drumming – it may be fairly rigid and tom-heavy, but the better quality recording really brings out a tambourine sound which gives everything a little lift. As before, the track’s spoken interlude taking a swipe at ‘Leader of The Pack’ very much helps French Girls draw a wonky parallel with a classic pop past, even if their chosen delivery often rallies against such obvious melodicism. The two minute belter ‘Aerobicise’ melds an East Bay Ray styled surf-punk lead guitar against a chopping garage riff. Despite being sharper and cleaner than the earlier take, It remains a highlight of this set, and the noisier ‘Soda Pop’ takes the sounds of The Donnas’ self-titled debut from ’97 and sharpens them in a way that sounds very natural. A clearer backing vocal really adds a buoyancy to the track that wasn’t previously so obvious.

Making good on the rough and ready promise of the earlier EP release and subsequent digital singles, this LP sets up French Girls in place one of the great garage bands. With ten no nonsense tracks packed into a speed driven twenty minutes, this is a disc that doesn’t let up. From the first notes to the last, these guys are set to clear the cobwebs; ready to shake your foundations and give you a good time. Possibly, even, the best time since Cheap Gunslingers gave the world an equally cool debut back in 2019. This is an album you won’t want to miss!