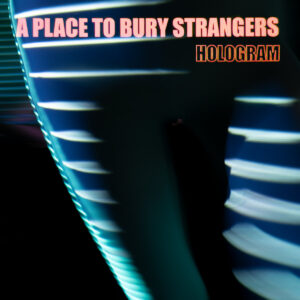 Their ‘Hologram’ EP presents the three piece band in really good shape. Founding member and frontman Oliver Ackermann (gtr/vox) is joined by new drummer Sandra Fedowitz, previously of Ceremony East Coast, and is re-united with John Fedowitz (bass) – a man who last had an active band role in APTBS during 2016. The new line up is incredibly tight, though doesn’t always opt for hammering out the same kind of full on noise you’ve come to expect from APTBS as a whole. In the case of lead single, ‘End of The Night’, especially, the sounds seem a little more spacious and layered, due to an increase of drum machines and synths used prominently during the number’s intro. It at first seems as if Ackermann is going for a more commercial angle, but despite a slightly lighter touch, nothing feels particularly radio friendly. As its five minutes progresses, Oliver unveils a relentless stream of distortion via a guitar that sounds manipulated to the point where the audio sounds as if it comes from a stretched tape. Reverb drenched vocals quickly conjure memories of the early Jesus & Mary Chain at their most feral and, eventually, Sandra’s extra snares augment the mechanised backing track. By the time everything reaches fever pitch, it’s easy to hear the full potential in this new chapter for the band, even if John’s bass is all too often lost in the swamp. Even more of a melodic slant informs the soft and hugely gothic ‘I Need You’, which sounds like a fantastic tribute to The Cure’s ‘Pornography’ album with its repetitious groove and hard snare sound. Atop a grumbling bass sound and trippy reverb, Ackermann’s vocal finds an almost wistful tone – somewhere between the poppier work from Jim Reid and early work from Tim Booth. In terms of “indie detachment”, this is perfect: cold, eerie and sad, yet somehow, strangely beautiful. There’s a feeling it’s great from the off, but once the vocal falls away to allow a swirling guitar line to rise and create a wonderfully bleak atmosphere, it takes the band in a brilliant and mature direction.

In a complete change of mood, ‘I Might Have’ casts aside the gothy moods for an intense jangle, as if Ackermann has overdosed on early Wedding Present singles, while Sandra pierces the wall of sound with some very rigid snare work throughout. In about a minute, the levels of noise become so intrusive that it’s almost possible to forget about any potential hooks. This, of course, is a return to classic APTBS and provides an excellent excuse to lose yourself in a swirling wall of sound. The intense jangle is overlaid by shrill lead work throughout, almost at the expense of the vocal, but somewhere within the head-crushing, shoe-gazing noise there are several flashes of more complex musicianship, most notably from John, whose lead bass pokes through more than enough to allow some impressive bottom end wrangling to be heard, almost in a frenzied and jazz oriented manner. Going for the even more intense, ‘In My Hive’ kicks off with machine gun-like rimshots and a pulsebeat that could almost be inspired by the earliest Human League, before dropping into a comfort zone where bits of My Bloody Valentine and Jesus & Mary Chain collide. Although playing firmly to a shoegaze by numbers framework, some great musical interest comes from a few weird lead guitar noises that sound like manipulated rubber bands and a rigid pulsing rhythm that’ll provide a wealth of nostalgia for lovers of old 4AD releases. Finally, ‘Playing The Part’ gives a rare insight into the band in a more natural state. Shorn of the wall of distortion and reverb, the clean APTBS sound exactly like a post-punk band from 1980. Traces of early Wire are present during the short and very accessible tune, but with a prominent live sounding bass from John (seemingly making up from being swamped earlier) and slightly fey vocal, there’s a huge similarity to bits of The Cure’s ‘Seventeen Seconds’ LP. From a purely retro standpoint, it’s superb – about as fine a tribute to a post-punk/burgeoning goth sound as you’ll find, and a perfect comedown after a fairly draining noise elsewhere.

If you’ve had any interest in A Place To Bury Strangers in the past, you know you want this. As for attracting any new listeners, ‘Hologram’ is a must hear for lovers of the loudest end of the shoegaze scale. It’s loudest moments are equal to JAMC’s ‘Psychocandy’, often more fun/interesting than the overrated My Bloody Valentine, and the unexpected retro goth tune gives a clearer insight into great players. In many ways, as if designed as the ultimate primer, it covers a near complete spectrum of the band’s musical interests. It’s still hard to see A Place To Bury Strangers ever rising beyond cult status or gaining any kind of mass acceptance, though – even from an alternative crowd – but they’re surely happy with that.