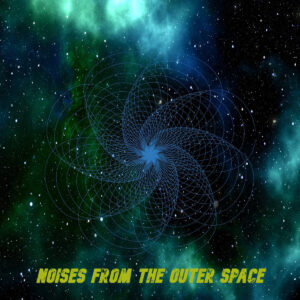 On the follow up to 2020’s ‘Entering The Solar System’, Billy Yfantis  delves even deeper into a world of ambient sound and disquieting electronica. Although feeling very much like a continuation of previous works, in some ways, ‘Noises From The Outer Space’ offers a very different listening experience. ‘Solar System’ gave listeners fairly easily digestible bursts of sound, best demonstrated via ‘Venus’ (a collection of very retro sounding synth noises and laser bursts not too dissimilar to an old Jarre work) and ‘Sun’ which dispensed most elements of melody in favour of a scratchier synthesized backdrop which quickly sounded like a musical shorthand for feeling detached. By contrast, ‘…Outer Space’ opts for massive blankets of sound of a far more minimalist nature.

With six pieces stretched out to almost equal length, the work feels rather calculated, but there’s plenty within to keep fans of ambient sounds interested. ‘Astral Noise’s opening, in particular, calls back to early 80s Tangerine Dream with its use of dark drones, but also feels like a throwback to an old sci-fi/horror movie with its use of space and whirring synth accompaniments. In some ways, it does everything it needs to within the first three minutes, but by recycling the main sound on an extended loop until an extra layer arrives – at times sounding like a heavily filtered choir of voices – it has an impressive tension, despite clinging on to the most minimal of noises throughout. About a minute into ‘Cosmic Noise’, Yfantis even disposes of the more obvious ambient synths and instead fills time with a hissing sound, almost as if an air-lock has been opened and pressure is being released. Eventually, the two elements blend and with Yfantis using the next two minutes to change the pitch of the sounds intermittently, it’s hard not to be reminded of bits of Edgar Froese’s solo output. A higher pitched synth begins to add an extra layer at the halfway point, but it would be something of a stretch to call this extra musical interest, since it doesn’t even promise the vaguest of melodies. Eventually scaling everything back to reveal a sound that seems like little more than the sound of air rushing through empty spaces, it’s an impressive example of a soundtrack that conjures a strong visual aspect – although each listener’s mind’s eye will imagine something different, the ability to do so is vital to making this worthwhile.

The double whammy of ‘Galactic Noise’ and ‘Interstellar Noise’ is far darker, with an opening that is heavy on bottom end drones intercut with husks of noise as if pressure is either building or being released. The sounds act as a soundtrack for entrapment, and its very easy to imagine them scoring a film about a capsule drifting out of orbit while its crew slowly run out of oxygen. Yfantis almost takes an improvisational approach as to how and when the drone changes – again, very little is concerned with anything most would consider music – but it works well throughout. Four minutes into ‘Interstellar Noise’ the tension even becomes a little too much for the listener in that it becomes clear that although these ambient sounds can colour a living space – a basic requirement for all good ambient stuff – these aren’t sounds you can work to, nor do they work in the same way as Eno’s ‘Ambient 1: Music For Airports’ or ‘Ambient 4: On Land’ in provide a pleasing contrast when heard on headphones in busy public spaces. If anything, they can increase feelings of relative unease, so you’ll really have to be in the right frame of mind if listening at length. Something of a standout moment – relatively speaking – Yfantis introduces a very clean synth sound at the four minute mark which sustains some pleasingly clean sounding chords for a couple of minutes, suggesting that he can hear some kind of melodic root within the impending doom and sprawling nothingness, before the piece almost sabotages itself with a shrill drone thereafter, something that’ll have the ability to scare all but the most tolerant fans of ambient/drone/sound collage recordings.

‘New Moon Noise’, meanwhile, works a set of really deep chords, but never in a musical way. Each drone stays for a duration that feels slightly uncomfortable, before shifting to the next and back again. The way it’s been arranged keeps the listener feeling tense, as if the quiet will be pierced by an unexpected arrival that’ll cause extreme fright. Luckily it never does. This really is ten minutes’ worth of ambling, almost acting as a very long into to the climactic piece ‘Planetary Noise’, which works a similar chord progression but is almost its polar opposite in replacing the deep drones with jarring and atonal sounds throughout. This is a moment where any ambient room colourants start to have more in common with a Lustmord-esque drone that pierces through the speakers in a really uncomfortable manner. The sounds are more than distracting – upsetting, even – suggesting some kind of astronomical disaster or planetary destruction. It’s an appropriate end to an hour of stripped down noise. it obviously wouldn’t work if placed elsewhere, suggesting Yfantis knew exactly how this sound collage should work, even if to the more untrained ear there’s more than an element of improvisation.

Somewhere between Edgar Froese’s ‘Aqua’, the darkest recesses of Tangerine Dream’s ‘Zeit’ and Eno realising that he doesn’t even need a basic melody to throw out sound, ‘Noises From The Outer Space’ is the ultimate exercise in pure minimalism. Those looking for even the most basic musical hook within their ambient backdrops might struggle with this recording on a long term basis, but if imagined as a basic soundtrack for a intergalactic trauma, or score for images sent back from a billion miles away, there’s something about it that’s surprisingly effective.