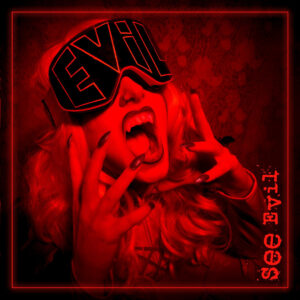 The first EP, ‘See Evil’, is a massive, riff heavy affair that reinforces the band’s commitment to a classic metal sound. ‘Chase The Devil’ creates some very strong opening bait from a musical perspective by recycling the kind of intro Slayer used for maximum atmosphere on slower tracks like ‘Dead Skin Mask’, before dropping into a dark, doom-blues laden riff that sounds like an uber-heavy Danzig colliding with Black Label Society. The two or three main riffs are enough to carry the track, musically speaking, despite everything feeling a little drawn out at over seven minutes. Those who loved the heaviest moments of the debut will certainly find plenty to lose themselves in here, and especially so once the heavy chug takes a hold. In terms of actual highlights, a fantastic lead guitar break further shares a love for Zakk Wylde with a flurry of weighty and wah-wahed notes that are impressive and impeccably played. In so many ways, it’s lucky that the riffs and lead work are so good – to the point of becoming absolutely absorbing – since in terms of actual song, there isn’t much here you could call “catchy”, at least in the traditional sense. The chorus seems over simplistic considering how much thought has gone into the music itself, and the clearly British accented vocal – occasionally carrying the faintest traces of Blaze Bayley – occasionally seems at odds with music carrying such a strong US-centric vibe. It’s good, rather than great; there’s a more than solid idea hiding in here and in re-acquainting people with the band, it definitely provides some broad musical scope.

‘G.F.Y.’ is far more direct, with the band absolutely absorbed in riffs that fall somewhere between John Bush era Anthrax and ‘Powertrippin’ era Almighty. As before, the music is terrific in a very retro way, with the production values really bringing out the crunch of the rhythm and a weighty bass underscoring some fine metal. Unfortunately, the earlier feelings that BBF aren’t so sharp when it comes to a lyric become painfully obvious when confronted by the kind of expletive driven hook that’ll only connect with eternal manboys who still wish it were 1991. If you’re able to ignore that, the shredding lead break is awesome, and the way the whole band lock down a solid groove is also admirable, so it’s a pity there wasn’t any extra effort in terms of the song-writing itself. The same could almost be said for ‘Chase The Wasted’ – the EP’s best track, hands down – which reawakens the sounds of ‘Crank’ era Almighty almost perfectly. This solid fusion of old style metal augmented by hardcore crunch is very much what BBF do best: the locked down rhythm, the sledgehammer riffs and semi-aggressive vocals more than show off a hugely talented band. Such a pity the best send off for the riff amounts to little more than a one-line hook. Then again, the same approach was utilised throughout the aforementioned Almighty disc, so maybe in this case, it’s actually a deliberate move. If they were going for a direct tribute to a track like ‘Wrench’, they definitely couldn’t have recycled the sound and feel any more perfectly.

There’s a lot here that extant fans of Bang Bang Firecracker will enjoy, and certainly, the riffs will be big enough for those fans to herald their return. For the slightly more discerning listener looking for a bit more than sheer weight, the hit and miss approach to a lyric could be a little frustrating but if you can make it past that, this EP has just enough potential to offer something of interest to a broad spectrum of metal fans.