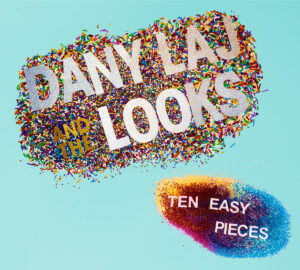 Right from the opening track, there’s a sprightly feel and an all round jubilant mood driving the material and ‘Smile’ more than sets out the band’s intentions with a barrage of 60’s jangling sounds, a smidgeon of retro organ and the kind of vocal melodies that would have suited many a garage band. A couple of Dany’s vocal stretches on the chorus venture into a slightly uncomfortable place, but it doesn’t hamper an otherwise superb tune where Jeannette’s rigid bass sounds keep everything anchored nicely and a classic, twangy lead guitar accentuates some brilliantly retro charms. ‘You & Me’ shifts the tone into something a little different via a riff on lend from The Beatles’ ‘Get Back’ fused with a good old R&B guitar sound coming through the instrumental bridges. Simplicity really is key here, and despite the lack of flashy arrangement, there’s plenty within the chorus harmonies that makes the number truly sing. An easy highlight, the album’s lead single ‘Don’t Keep Me Guessin’ almost takes a rootsy approach to power pop, ending up with something that sounds like The Bodeans colliding with They Might Be Giants. Between a massive hook, some cool male/female harmonies and an underscoring accordion sound, it creates one of the year’s biggest earworms. Between a shamelessly sunny riff and some quirky vocal interjections, a couple of plays is enough to guarantee this will be a fan favourite.

Adding more of a new wave slant, the punchy ‘Pick It Up’ stokes up the electric guitars to deliver a massively crashy riff, while a busy bass drives everything further with a real confidence. Dany’s performance – falling somewhere between a stroppy Donnie Iris and the sounds of a couple of The Looks’ Rum Bar labelmates – more than carries a great melody throughout. Tackling something almost punky, ‘Smoke In The Sun’ is loaded with rattling bass work carrying something of a live sound, a plethora of loud rhythm guitars, and swirling garage rock organ. Both Dany and Jeannette sound like they’re having the best time hammering out a vocal dominated by rough and ready harmonies, but it’s no match for the lead break where Laj’s guitar careens out of control much like one of Bob Stinson’s old performances. Unafraid of variety, the first half of ‘Painting My Face’ underscores the jangling pop rock with a ragged Americana derived two step, in a move towards a very 90s sounding arrangement that really suits the performance in hand. At the point this could be in danger of being repetitive, a middle eight brings a brief burst of noisier rock where Dany’s guitar work echoes mid period Replacements, and although the music leaves more of a lasting impression than the lyric, it all sounds great.

Another unexpected highlight is supplied by the mid tempo ‘In Other Words’ where the trademark Looks sound is melded to a few Badfinger inspired melodies. An echo on the vocal occasionally hints at a misplaced love of solo Lennon, but it’s very much a stylistic choice that suits the piece. A pleasing acoustic guitar occasionally pokes its head through the wall of sound as a reminder that this album has plenty of great little flourishes despite a fairly simplistic outlook, while a relatively harmonious chorus accentuates the band’s love of a musical past in a lovely, understated way. A heavily reverbed lead guitar break tips the hat to the early rock ‘n’ roll sounds of Sun Studios, and despite being littered with flat notes, it has the right kind of heart to sound effective. Rigid 4/4 beats power a very 60s inspired ‘Who’s Pickin’ On You’ with The Looks completely losing themselves in some perfect sounding garage rock. It doesn’t bring anything new to the genre in hand, but with Dany occasionally hitting a note or two that would suit Dave Pirner and its very familiar arrangement making it feel like an old friend right from first listen, it’s effortlessly cool. In terms of complexity, ‘One More Hole’ stretches the band’s talents admirably when fusing a light reggae rhythm to their trademark pop. Striving for something a little sunnier, Laj’s guitar tone takes on a much thinner sound and Jeannette’s voice has a much bigger presence. Somewhere between a slightly lax lead vocal and some busy bass work, the number creates a uneasy push and pull between the hazy and the taut, but it actually works well; despite everything playing much straighter on a chorus where a heavy power pop jangle compliments a few off kilter harmonies, this is just different enough to make to lend the album another standout. It might take a couple more plays to embed itself compared to the likes of ‘Don’t Keep Me Guessin’, but in time, it becomes another great reminder of some fine underground pop songsmiths at work.

Even when the material occasionally lapses – as it does on the less impressive ‘I Play Guitar’, opting for power pop on autopilot – the band never sounds truly uninspired. Overall, ‘Ten Easy Pieces’ is a fine collection of spiky pop tunes that doesn’t especially care for sheen; most of the time, it’s all the better for that. It’s worth picking up for ‘Don’t Keep Me Guessin’’ and ‘Who’s Pickin’ On You’, but with very little filler, there’s plenty here for power pop fans to devour on an album that’ll soundtrack many future good times.

If you enjoyed this and other reviews and features this month, please consider buying us a coffee at the following link. Your small change really helps out in keeping Real Gone online. Thanks!  www.ko-fi.com/realgonerocks