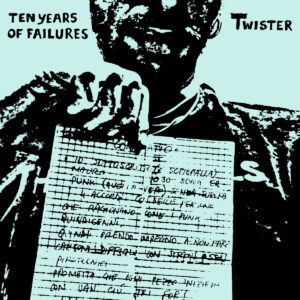 The pair of tunes that make up their ‘Ten Years of Failures’ release definitely sit at the most melodic end of the spectrum – far more of a pop punk/punk rock hybrid than some of the Ramonescore that filled their earlier full length LP – but one of the songs ranks as a career best, both in terms of performance and musical structure.

The lead track ‘After Me’ wastes no time with even so much as an intro. Following a brief rattle of a cymbal, the band crashes headlong into an arrangement that falls somewhere between the 90s old school sounds of Diesel Boy and Screeching Weasel at their most poppy. The rhythm guitars are taut, but played in such a way they provide a perfect backdrop for a crisp lead that’s never overused, but still manages to create the track’s strongest melodic hook. It’s the kind of tune that, at first, feels like it deserves far better than the one-line chorus it ultimately gets. It isn’t too long, though, before the overtly simple hook of “there is someone after me” (repeat, repeat) actually becomes genuinely infectious. One line choruses are tricky things to get away with, but maybe, just maybe, in this case, nothing more was needed. By the time you’ve heard this number three or four times, it’s overt simplicity becomes everything. As with a lot of Euro punk of this nature, the accented vocals take a little while to attune, but are used effectively throughout, and this becomes especially obvious at the track’s tail end when a brilliant call and response section gives an already good tune a massive lift.

On the flip side, ‘Frozen’ works a massive riff that comes somewhere near high end of mid tempo (in punk terms) and showcases a much punchier drum sound throughout. An arrangement that’s far more Face To Face derived than Ramones obsessed, its intro will be enough alone to catch the ear, while a huge lead guitar sound helps keep the music buoyant. Moving into a verse where harmony vocals are used extensively, Twister sound so much more melody conscious than some of their peers, and by using a vocal arrangement that draws more heavily from power pop influences as opposed to the more typical “gang vocal” variety, this track stands half a chance of reaching a broader audience. Having used the call and response approach brilliantly on ‘After Me’, it makes an equally impressive return here, and while most of this track’s vocals could be seen as an acquired taste, when hearing the accented delivery interspersed with something more aggressive, it actually becomes so much more effective. In just three minutes, Twister serve up the kind of punky power pop hybrid that deserves to be heard by everyone.

These songs strike a perfect balance between punch and melody, punk and power pop; the choruses, although simple, are huge and the vocals are a massive improvement compared to the unrestrained yelping on parts of the ‘We’ll Be OK’ LP. When taking the whole package into consideration, these songs represent the strongest side of Twister’s musical abilities in so many ways. There might not be too much here for anyone hoping to catch the band in full-on Ramonescore tilt, but in terms of musical progression and maturity, it all sounds like a big step forward. Recommended.